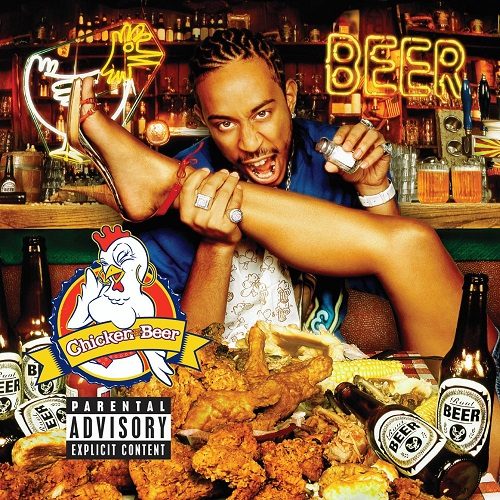 Chicken wings. Chicken thighs. Barbecued or fried, with hot sauce or mild, you can even take it in strips and nuggets if you like. Whatever your pleasure, almost everybody loves to eat chicken. And what better to accompany some hot-n-fresh juicy chicken is there than a cold bottle of brew? If this sounds like the perfect recipe for a summer picnic, well, your city must have some pretty liberal open container laws. Despite that there’s no reason not to enjoy a big bucket of KFC and a cold tall can or 40 in the comfort of your own home.

Ludacris’ “Chicken-N-Beer” is a little different though. For his delicious combo, it’s sometimes MANDATORY that you take it out your home. The Atlanta superstar has always been in love with big beats you can bump in the ride or get krunk to at the club. Kanye West’s production on the lead single “Stand Up” is no exception. You’ll catch some strings in the chorus, but the verses are an exercise in pounding your subwoofers. Thanks to the West expertise, the beats don’t drown out the rhymes, which means you can hear some funny Luda-shit:

“How you ain’t gon’ FUCK, bitch out me?
I’m the GAWD DAMN reason you in V.I.P.
CEO, you don’t have to see ID
I’m young wild and strapped like Chi-Ali
BLAOW! We ain’t got nuttin to worry about
Whoop ass, let security carry ’em out
Watch out for the medallion my diamonds are reckless
Feels like a MIDGET is hangin from my necklace
I pulled up wit a million trucks
Lookin, smellin, feelinglike a million bucks-ahh!
Pass the bottles, the heat is on
We in the huddle all smokin that Cheech & Chong
What’s wrong?! The club and moon is full
And I’m lookin for a THICK young lady to pull
One sure shot way to get em outta them pants
Take note to the brand new dance, like dis”

There’s some smooth shit here too though. ‘Cris has developed a reputation as a sexual freak ever since “What’s Your Fantasy” and the Icedrake produced “Splash Waterfalls” won’t dissapoint. To give you an idea:

“You both unite as one, you the moon and she’s your sun
Your heart’s a beating drum (make love to me)
You better not of came, she want to feel the pain
Then hear her scream your name (fuck, meee!)”

Like the album’s title, the beats and rhymes here are a perfect combination. It’s a running theme throughout this well executed album. The DJ Nasty and LVM track for “Hard Times” featuring Eighball & MJG as guests and Carl Thomas on the hook sets the perfect mood for telling stories of survival. DJ Paul and Juicy J’s “Diamond in the Back” is a pimped out trip through musical ecstasy perfect to cruise through your neighborhood to. “Screwed Up” featuring Lil’ Flip has that perfect slow flow courtesy of the Medicene Men. Even Erick Sermon gets into the action on the aptly named “Hip Hop Quotables”:

“My filthy mouth, it won’t fight cavities or beat plaque
So I shot the tooth fairy and put my old teeth back
I take a shit on the equator, the size of a crater
And make government officials breathe harder than Darth Vader
It’s the chicken and the beer that makes Luda keep rappin
But no pork on my fork, I don’t even SPEAK pig latin”

Production on “Chicken-N-Beer” is diverse throughout, with no beat maestro having two songs in a row and very few even having two songs on it total. Medicene Men are one of the few repeat offenders musically on the album, and they strike gold again on the next song “Hoes in My Room” featuring Snoop Dogg. Other than DJ Nasty and LVM, the only other repeat offender is Three 6 Mafia’s DJ Paul and Juicy J, who give Chingy and Disturbing Tha Peace a club tearing beat on “We Got.” By keeping things the same with Luda’s distinctive Atlanta rumble and finger-lickin’ lyrics, but keeping things different with various spicy beats throughout, this album achieves a good balance measured on the whole. Ludacris has shown steady improvement ever since his 2000 national debut, and “Chicken-N-Beer” will not dissapoint Ludacris fans. Take a bite and wash it down, but don’t be surprised if the taste is so good you can’t help hitting the buffet for seconds, thirds, fourths and fifths.