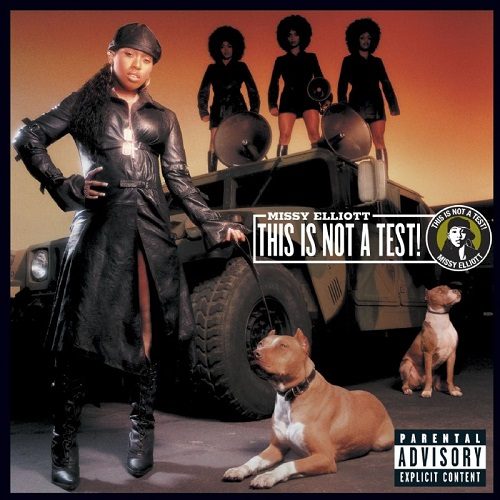 Missy Elliott :: This Is Not a Test

What you hear is not a test. Missy Elliott’s rockin’ to the beat. Beats by Timbaland, that is. Hip-Hop has always had historically ill combinations of producers and rappers: DJ Premier and Guru, Pete Rock and C.L. Smooth, De La Soul and Prince Paul. As surely as any of these collaborations belong in the Rap Hall of Fame, Missy and Timbaland deserve the award for year after year of CD’s with songs that pushed the edge of the music envelope for both pop AND hip-hop. No other rapper in Timbaland’s crew makes his ill beats so fresh, and no other MC but Missy brings out his most unorthodox noises and creative soundscapes.

Having established their dominance together through four straight multi-platinum albums of chart-topping singles and underground favorites, neither Missy or Timbaland have anything to prove. Calling her fifth album “This Is Not a Test” is not only Missy’s sly shout out to the old school (duly noted by Mary J. Blige singing some Sugarhill Gang in the album’s intro) but her recognition that both she and her audience have already passed every test of whether or not the Missy phenomenon would last. She certainly scores high on the album’s lead single “Pass That Dutch,” a stripped down Timbaland melody of hand claps and HUGE bass beats so you can feel that B-A-S-S bass. In typical Missy fashion, she takes that strong backing and attacks it with her playful wit and charm, which Timmy even takes a second to match with a De La Soul snatch:

“Number one – drums go BUMP BUMP BUMP
This beat here will make you BOOMP BOOMP JUMP
{*beat change*}
If youse fat one, put your clothes back on
Before you start puttin +Potholes in my Lawn+
{*normal beat*}
Oh my – gosh! Oh my gosh!
I’m under attack like my name was Saddam I am the bomb from New York to Milan
And I can write a song sicker than Jeffrey Dahm’
(Woop woop!) Don’t touch my car alarm
Break in my car you will hear “Viper Armed”
I’ve been a superstar since Daddy Kane was +Raw+
I’m live on stage, c’mon and give me some applause!”

She’s hardly letting up on the follow-up “Wake Up,” which has a guest appearance by Jay-Z and another hardcore stripped down Timbaland beat. She slows it down a bit for the dancehall anthem “Keep it Movin” though, featuring the chatta of hip-hop’s latest reggae guest-of-the-minute Elephant Man. On “Is This Our Last Time” she takes over behind the boards for herself, providing strong bass and a melody that borrows a bit from “Second Time Around” by Shalamar, giving the song a perfect punch to tag-team flows with Fabolous:

“Cinderella, you was wit it before
Now when I bring a slipper, you act like you don’t fit it no more
Like I got it, but I can’t get it no more
And I ain’t usually a chaser – cause I write wit my pencil
But also know how to use my eraser”

Going back to the old school again, “I’m Really Hot” has the echoing sound effects like a video game, whistles, quick scratches, and sirens guaranteed to make 80’s heads nod in approval. Timbaland gradually builds up the sound with additional melody and bass to modernize the flow, and the overall result is as hot as they come. “Dats What I’m Talkin About” is a bit cold though, and not from the “ice just to chill the night” Missy bought and sung about. As a duet with R. Kelly, it has a forced syrupy sweetness that’s the antithesis of her more natural odes to getting a groove on, doing neither contributor justice. The first half winds up with “Don’t Be Cruel” featuring Monica, but could just as easily be called her 2003 update on Salt-N-Pepa’s “Push It” until Beenie Man takes over and the beat turns into bouncy reggae for the rest of the song.

The album’s second half starts out Missy’s trademark sly sexuality over a smooth beat, and let’s just be frank about it – her “Toyz” are devices for masturbation. Only Missy Elliott can get away with a singing to a beat so pop that radio DJ’s could easily slip this deceptively raunchy song into the mix with Justin Timberlake and Kelly Clarkson. “Let it Bump” is a more traditional hip-hop song from Missy and Timbaland though. It’s also both a statement and a problem. While Timmy’s continued insistance on sonic minimalism is a refreshing statement in a world of over-produced mayhem, it’s not necessarily what Missy fans would expect from him production-wise. Those used to the sound shock of hits like “I Can’t Stop the Rain,” “She’s a Bitch” and “Work It” may by this point in the album feel dissapointed at the lack of quirky yet funky jams he’s always been known for.

“Pump it Up” featuring Nelly is as close as it gets for Timbaland. The beat twangs like a snare drum tightened too much, with a mic shoved as close to the head as possible. The result is not unlike leaving change on a glass table when you crank the speaker up to 10, and listening to everything rattle. While it’s still a scaled back approach to beat-making, it has that innovative sound one would expect from Tim, the kind of thing one doesn’t hear on the radio until he’s done it first and other producers copycat it.

“It’s Real” is another self-produced Missy track for her to croon an R&B melody over; and while hip-hop fans might generally prefer her punchy raps to her diva stylings this one will not cause the listener to hit skip. In fact, the only downside of the track is that at two minutes and fifty seconds, it’s just too short. “Let Me Fix My Weave” is a traditional Timbaland sound, meaning it’s not stripped down, but it will echo previous works he’s done for Missy and Bubba Sparxxx among others. It’s definitely got the fresh for Missy to rap to though:

“I met a guy named Tommy, very charming
He was on me like cheese be on maca-raw-ni
His game real tight, makin me so hawny
Fine enough for us to fuck to be his baby mommy
He really don’t know me so I moves in slowly
Brush up and let him hold me, let me spit some bolog-ny
Baby you can call me if you go down on me
But you got to back up off me wearin Cubic Zircon-y”

The album wraps up with another old school style track, with Tim providing another unenhanced beat while Missy does her best K-Solo style on “Spelling Bee” with a flow tight as H-E-double-L. Then comes the self-produced “I’m Not Perfect” featuring the Clark Sisters, and an “Outro” to match the “Intro” with Mary J. Blige again playing a guest role. On the whole, while it’s always great to hear from Missy and Timbaland and “This Is Not a Test” is no exception, it’s truly the first time a Missy release has seemed to be somewhat mediocre. It’s a shocking thing to say, but both Missy and Timmy seem to have left their A-Game at home. While it’s good enough to satisfy long-time fans of either one’s style, the t’cha must reluctantly conclude this essay is only good enough to warrant a B.

Missy Elliott :: This Is Not a Test
7Overall Score
Music7
Lyrics7