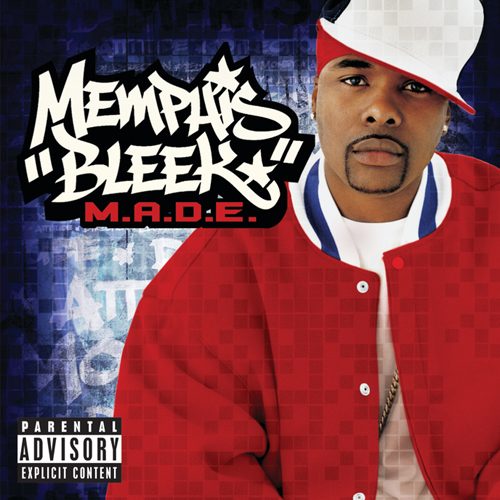 When you’re Memphis Bleek, you’re caught between the uncomfortable dichotomy of being on one of rap’s hottest labels, yet always having to play second fiddle to labelmate Shawn ‘Jay-Z’ Carter in respect and acclaim. Now is the time for Memphis Bleek though, and the streets are watching. Why? Because Jigga announced that “The Black Album” would be his last release, and that he’s going into retirement. This may be somewhat disingenious, as many musicians have “retired” only to make comebacks 2, 5, 10 or even 20 years and more later. Still, as the opening skit of “M.A.D.E.” would indicate, the stepping down of the top dawg gives everybody else on the roster a chance to move up into that slot.

It’s not a straight ascent upward for Bleek though. He will be challenged on one hand by veteran artist Beanie Sigel, and on the other by popular up-and-comer Freeway; not to mention the new generation of Roc-A-Fella artists following in their wake like the Young Gunz (Chris & Neef). Still Bleek has paid his dues and can date his career back to Jay-Z’s “Reasonable Doubt” debut, with a rap on the track “Coming of Age.” There’s no Jay protege that’s been around longer or supported him stronger. His debut album of the same name was shaky, but Bleek came into his own with 2001’s “The Understanding” and established himself as a veteran MC in hip-hop. With “Round Here,” the first single off his new album, he’s out to make an equally brash statement. Just Blaze eschews his trademark style for a slower and broader bassline of heavy thump, and not surprisingly Bleek enlists Southern all-stars T.I. and Trick Daddy to ride on it with him. It’s unexpected enough to turn heads, dope enough to get spins, and Bleek’s verse show he’s out to win:

You can’t deny the fact the track or any of the rappers on it draw their inspiration from Juvenile tracks like “Ha” and “Momma Got Ass,” but they do stick to the formula well. By making sure that “round here” is each line’s primary rhyme, yet always having a subsidiary one before it and making the occasional deviance from it, they keep things fresh. Blaze dominates the early part of Bleek’s album musically, producing both the action bounce of “Everything’s a Go” featuring Jay-Z and the sly boogie of “Just Blaze, Bleek & Free” featuring Freeway – before and after the lead single respectively. With so many guests so early one might worry Bleek would be usurped, but he starts off right on the latter song by saying he “had game since the days of Atari” – say word! Then on the Scott Storch produced “We Ballin’,” Proof shares guest duties with Young Chris, who rips off Bleek’s line by rhyming it with Ferrari. Eh, not as clever the second time.

Blaze takes the reigns back on beats for two of the next three tracks, starting on the ultra-slick “Hypnotic.” It’s an accurate assessment of the beat – the slow beat, funk groove and lilting flute will mesmerize, and the raps by Beanie Sigel and Jay-Z support things nicely while almost but not quite upstaging Bleek’s rap:

“It’s like a preacher preachin in scripts, or psychic readin a palm
Lines give me what I write in a song
The book is now open so let the story be told
I enter through your mind to add to the back of your soul
That can put you to some insight, I shine like a headlight
Pick any dime and watch me get right, I’m that nice
Words are secure to help me heal up her heart
Words can become that evil game that help me get what I want, uhh
You start where you end, you end where you start
I am the light of the situation, I overshine dark”

It’s a truly amazing transformation for Bleek, who once seemed like the same run-of-the-mill East coast no-names who infest popular mixtapes, and now spits with a style and intelligence that raises him far above their level. Therefore you can hardly fault him for remaking “P.Y.T.” with Donell Jones playing the Michael Jackson role on “I Wanna Love U,” a sure contender for a future single. Still it’s songs like the T.T. and E Bass produced “My Life” that both Bleek fans and new converts will be checking for. It’s personal and provacative, starting out soft-spoken, and gradually bringing up both the beat and the vocals to intensify the effect of his rags to riches narrative. It’s not all serious though. Nate Dogg adds his suave vocals to the light braggadocious rap “Need Me in Your Life,” where Bleek makes himself ace in the hole for horny women. He can also make it grimy as all hell on songs like Scott Storch’s “Murda Murda” featuring Jigga and Beans, sounding like what Ja Rule and his posse only WISH they could be.

Has Memphis Bleek fallen off at all in the last two years? “Hell No” may be the song that answers that question. If it isn’t, the ultra-intense “Hood Muzik” featuring Brownsville’s own Mash Out Posse should be. M. Bleek’s not coming weak on his third album, not afraid to beg people to “Understand Me Still” and share the spotlight with Rell, yet old school enough to kick it over “UFO” on the song “1, 2 Y’All” – doing an update to it even better than “Realms of Junior M.A.F.I.A.” could. By the Just Blaze produced “R.O.C.” finale, Bleek’s taken you on a whirlwind tour from the depths of his soul to the most superficial realms of his playboy life. Sounds like a description of Jay-Z right? You’re damn skippy. While the Roc is a talented roster with lots of lyrical mobsters, Bleek more than any of them seems poised and ready to be “M.A.D.E.” and become the new don of the clique. Welcome to the forefront Bleek, hold it down while you can and watch out for the haters.