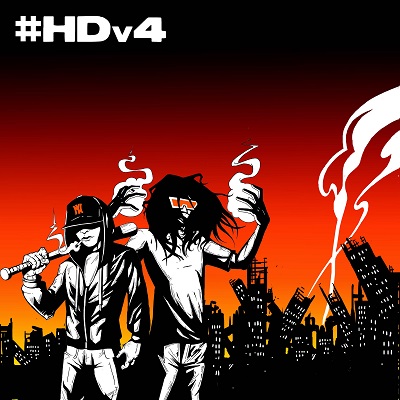 Picking up where “Haze Diaries Volume 3” left off in 2010, the unusually third-coastal team of Gotham Green (New York) and Quickie Mart (New Orleans) have not missed a beat on #HDv4.

Sounds like a whole review doesn’t it? Damn, I wrote the conclusion before the intro. Well just play this movie in reverse and it will make more sense. To be honest this album is kind of backward for me too, as it came in an unsorted zip file with 19 songs in alphabetical order. Thankfully their Bandcamp page clears up the order it’s supposed to go in, but since I was already listening to it in a “so-random it’s sorted” order out of sync with that prescribed format, I’ve got a different and possibly better appreciation for this release. It starts with the highly enjoyable “All I Know” featuring Freddie Gibbs and T. Mills.

Soon enough I’m hit over the head with the pothead anthem “Break it Down,” and the instrumental raises goosebumps on my arsm because it re-interpolates the instrumental to Artifacts’ “Cummin Thru Ya Fuckin’ Block” featuring Redman, one of my favorite rap songs of all time. Appropriate that it’s a weed smoking anthem too given the proclivities of the emcees I first heard on the beat almost 20 years ago. Listen to their version on Bandcamp, then listen to Tame, El and Reggie Noble below and tell me that I’m wrong. Goosebumps.

The hits (pun intended) keep on coming. I dig the laid back rolling sound and echoing drums of the anthemic “Burn it Down” featuring Zeale and Casey Abrams. Speaking of dope guests, El Prez is on the funky “Everything,” Know One and Lyrikill are on “Final Curtain” and “Front Row Friday” features Chris Clarke, Sum and Malkovich. Given that my track order is alphabetical I even get the Gold Chain Military on “Gold Bars” next. Could there have been any better introduction to #HDv4 than that? Even if you do it right though and start with “Been a While” then finish with “Final Curtain” like you’re supposed to, the presentation is fresh as fuck. It’s like Hieroglyphics meets the Dirty South meets East New York, and that might sound insane, but these stoned out artists make it work.