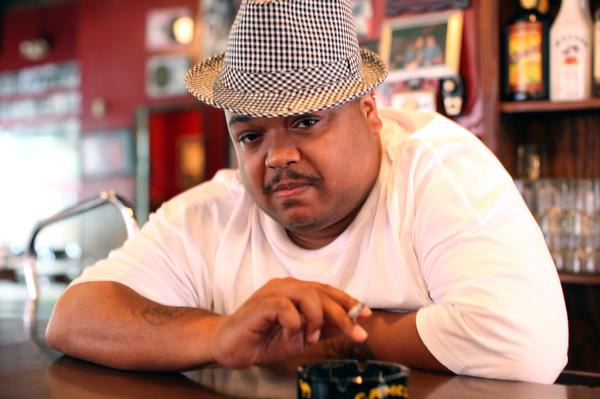 Everybody knows him as the shower cap wearing member of D12 with the most shocking, and oftentimes most entertaining, lyrics. Bizarre has a solo career, as well, though, and on October 23rd he’ll be releasing an album sans his D12 compatriots titled Blue Cheese and Coney Island on his own label, Red Head Records. This week RapReviews caught up with Bizarre to find out about the differences in fame between his solo career and his work with D12, his multiple reality show experiences, including Celebrity Fit Club and Celebrity Rap Superstar, and why he feels a transvestite may be the answer to your dreams.

Adam Bernard: First off, everyone knows you were on Celebrity Fit Club a year ago, so how’s the weight loss coming along?
Bizarre: Yeah, it’s cool. I’m still doing it.

AB: You were also just on another show, Celebrity Rap Superstar. How was that experience?
Bizarre: I was matched up with my man Pedro (Efren Ramirez) from Napoleon Dynamite. It was cool, but he needed a lot of work, man.

AB: How is it teaching someone to rap? It almost seems innate in great MCs.
Bizarre: It’s hard, man. Everybody don’t got it. It’s just like playing basketball or any other sport, some people can do it and some people can’t and you can’t really teach rap.

AB: So how have you gone about helping this guy out? Does he even know what a bar is?
Bizarre: He’s gotta find out what the rhythm is first {*laughs*}.

AB: So do you think that’s the most difficult aspect for these guys, to catch the beat?
Bizarre: Right, yeah. Music is all about rhythm and emotions and he’s kind of stiff like a robot.

AB: You oftentimes have a flow that plays with the beat a little differently than a lot of other MCs do, so is that something you’re attempting to teach or are you just like listen, just try to do this straight, man?
Bizarre: I was trying to explain to him that you can play with it a little bit and you can come out of the pocket, you don’t have to be on beat all of the time because I don’t be on beat all of the time, but he goes too far out the pocket where he can’t come back.

AB: And during all this reality TV madness you’ve also found time to record another album.
Bizarre: Yeah man, I got the lab at the office in Atlanta so whenever I ain’t doing something else I’m in the studio late night.

AB: Atlanta? What happened to Detroit, man?
Bizarre: I’m still there once every two to three weeks. Trust me, Detroit sees enough of me.

“The album is coming out October 23rd, it’s called Blue Cheese and Coney Island and it’s a roller coaster ride.”

AB: So tell me about the album.
Bizarre: The album is coming out October 23rd, it’s called Blue Cheese and Coney Island and it’s a roller coaster ride. I tackle struggle, poverty, relationships, partying, over the edge, it’s a little bit of everything. I have a couple serious songs on it, too.

AB: Do you consider yourself underrated?
Bizarre: No, because people who know about me know about me. A lot of people know about me so I’m just glad to have the little props that I got. Just give me a little piece, man, that’s all I want.

AB: How do you think life would change if there was universal adulation and ten million records sold all the time?
Bizarre: You know I think I’ll still be cool. I did kind of see it all, that’s what’s unique about my situation. I’ve been around Marshall and he done sold like 20, 30 million records, and my group, we sold eight million records, so I done seen the big picture and I’ve seen the little picture, so it’s all good to me.

AB: The little picture is more personal while the big picture is more fame. Which do you prefer?
Bizarre: Well, I mean, you know like I said, I done seen the fame being with D12 and being associated with Shady Records so that’s gonna be there, I’m kind of more on the die hard D12 fans and die hard Bizarre fans that just want to see me come out with an album so if there’s a hundred thousand of them or ten million of them that’s who I’m trying to get at and please.

“I don’t want to be looking like everybody else out there so I switch it up. That’s what it’s all about to me, making a statement.”

AB: You have an interesting fashion sense. Talk to me a little bit about your personal style?
Bizarre: Aw man I just like to be different. I don’t want to be looking like everybody else out there so I switch it up. That’s what it’s all about to me, making a statement. Do what you wanna do, man, it’s a free world. I’m just not afraid to wear what I wear and do what I do. That’s me, I don’t want to be like everybody else. If everybody else is wearing blue shoes I’m gonna wear yellow. If everybody’s wearing pink I’m wearing orange. That’s just how I am.

AB: Moving to a more serious topic, how hard was it going back into the studio after the murder of Proof?
Bizarre: It was super hard, man. Actually we went to LA to try to record and try to get away from Detroit and get away from the memory and try to switch it up a little bit, but it’s been a struggle. It’s a struggle everyday to try to get over our homeboy. He’s always going to be in our memories and our minds.

AB: You said you tried to record to get away but was there a waiting period where you just didn’t want to step foot into a recording studio to do a group track?
Bizarre: Yeah, it took us a couple months before we stepped forward in the studio. But we all got together had a big meeting and was like yo man we got to do this, Proof would want us to do this so we had to step it up, but we had to definitely take some time off.

AB: Has that incident changed anything about what you’ll put in a rhyme?
Bizarre: No, not really. Proof was our homeboy so he wouldn’t care what we rhyme about. We always gotta do us, but we definitely got a song on the album dedicated to him that’s real emotional. That’s what’s up.

AB: So take me through a day in your life. When does it start and how much do you get done?
Bizarre: The life of Bizarre. Seven o’clock in the morning I wake up before everybody else wake up. I write a “things to do” list. Twelve noon or one o’clock I hit the studio and stay till like five, seven, eight o’clock. I come back and have a couple meetings, talk to at least a hundred phone calls a day handling business. I try to watch one of them DVDs, smoke a couple blunts and go to sleep. Wake up the next morning and do the same thing.

AB: You must get three hours of sleep.
Bizarre: Yeah {*laughs*}.

AB: Finally, what’s important to you in this world?
Bizarre: Living your life to the fullest and making your dreams come true because tomorrow’s not promised to you. That’s what’s important. Do you, man.

AB: Well I have this dream about Jessica Alba but I’m not sure it’s gonna happen.
Bizarre: Well, if it don’t then just get a transvestite that looks like her.