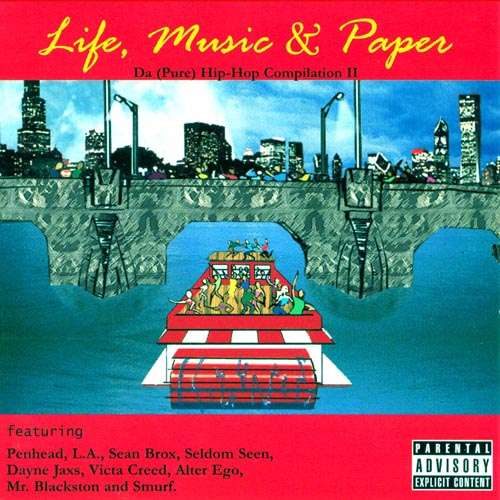 Harrisburg wants to be known as more than the capital of Pennsylvania. Make It Happen Entertainment hopes to be the cutting edge of that movement, hoping to liberate hip-hop fans from the perception that all dope hip-hop in the P-A is straight outta Philadelphia. Two years ago the label first gained national recognition with “Da Ambush,” a fairly solid compilation of rappers who hailed from Harrisburg and central Pennsylvania in general. After pushing a respectable 9,000 units for a largely unknown indie label, M.I.H. has come back with a 2004 sequel featuring many of the same artists on “Life, Music & Paper.”

Penhead starts things off nicely on the title track. Last time around, this rapper asked the provocative question “Who Wants to be a Terrorist?” and got some heads thinking about the realities of the world. Based on the buzz he successfully debuted his own solo album “Paramount” later that year, and even garnered a nomination from the PhillyHipHop website for the best indie album of the year. With those kind of credentials under his belt you’d expect nothing short of dopeness, and once again Penhead comes through:

“The franchise pick, hand write slammers like it ain’t shit
Shake up the rankings everytime I spit
Few know my true existance – jewels and riches
Jealousy fuels the bitterness
In so many people’s heart, it starts to wear on you
Who’s there for you when you need them? The green is
Money is reliable, though it comes in cycles
And it’s no secret you need it
And no man can tell me different, I take my money advance serious
Dough’s a must in this world we live in
The road I walk has reason, it leads to treasures and kingdoms
Flood the estates with Tracy Binghams
And Beyonces, my dime started a crimewave
If looks could kill, homicide would climb a ways in rate
Play it safe, cause niggaz will hate”

Pen’s got a highly polished East coast flow slightly reminiscent of Inspectah Deck, with a little Malik B thrown in. While he’s truly one of the label’s breakout stars due to his breath control and intelligent lyrics, the roster is surprisingly deep in talent. “Addicted to the Game” by Sean Brox is a winner thanks to Jay Allen’s polished DJ Premier style beat, DJ Ron Ski’s scratches, and a flow that’s like a quicker more uptempo version of Beanie Sigel. Victa Creed kicks it like a Sunz of Man member on the brooding “Chapters” and bubbles over the ominous warnings to children about “Monsters” on the street. AlterEgo keeps things moving with a quick triple-time rhyme on “Situations” and the simply titled and slower paced “U” where he duets with female rapper L.A. Another breakout artist is Seldom Seen, who won high praise last time on “Da Ambush” and doesn’t dissapoint this time around on the thoughtful cut “A Whole Nutha World”:

“I seen a lot of things, done a lot, grew up quick
Real slick, product of the block
I watched niggaz rise and fall, kill and die at war
For a piece of that pie, just a few dollars more
Unsure what was in store, bored with the same ol’
Hungry to explore the possibilities the game hold
Too old not to know right from wrong
but still too young to see the consequences that would come”

When Matt Jost first introduced us to the Harrisburg scene back in oh-two, he wrote these words: “[It’s] impossible to hate or even just remain cool in the face of a quality offering like this.” Indeed, the verdict on “Life, Music & Paper” must be almost entirely the same. By having only one producer on the album, Jay Allen keeps things strong and consistant and shows that he’s an untapped talent in hip-hop music capable of blowing on a much larger level. By having so many solid rappers from mid-Penn. like Brox, Penhead and Seldom Seen, the label proves the exact same point. Make It Happen Entertainment and their rappers are just one big break away from being hip-hop’s next underground rap label dynasty, but in the meantime they’ll continue to win fans both in and outside of Pennsylvania with quality compilations like these.