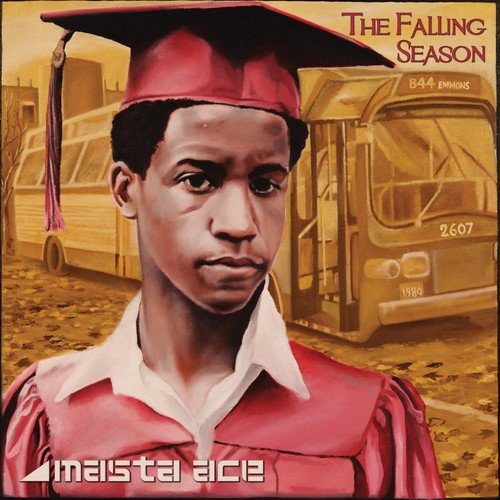 Masta Ace has had a grand design with all of his solo records since 2001. With “Disposable Arts“, he created a concept album that was partly a satire on the rap industry of the early 2000s, but mostly a story about a fictionalized version of himself re-adjusting to life after a six-year prison sentence. His 2004 album, “A Long Hot Summer“, was just as much of a sequel as it was a prequel, with songs and skits which provided the sequence of events that landed Ace in jail in the first place. With “The Falling Season”, Ace goes back farther in time. Set during his adolescence at the onset of his high school years, Ace brings his eye for detail and turns it on to the awkwardness and insecurity of his youth.

Produced entirely by Cali-based producer K.I.C. Beats, Ace has chosen to forego enlisting the variety of producers who were behind the boards on his previous releases. Luckily, K.I.C. was capable of shaping the beats to fit the concept and lyrical backdrop, making the beats different but having an overall consistency. The album chronicles how Ace ended up attending high school in Sheepshead Bay, far removed from his home section in Brooklyn and his four-year experience there. It’s also where he met two people who would play prominent roles in the overall story of his albums: The ill-fated loudmouth super-senior Fatz Belvedere and his future girlfriend, Lisa.

By choosing to inspect his formative years, Ace provides material that’s relatable for listeners, especially Black listeners who share the understanding. Take the song “Young Black Intelligent (Y.B.I.)”, for example. Ace gives a first-person account of how people, including his Black high school peers, tend to view “Black” and “Intelligent” as oxymoronic together and thus, mutually exclusive. So, if you were a smart Black kid during high school with good grades, a large vocabulary and diction, it meant that you were trying to be White and therefore excluded from your own. Though times have changed in the years since to the point where being a Black nerd is now considered chic, Ace captures the pain and insecurity of that experience perfectly with help from Chuck D, Pav Bundy, & the Hypnotic Brass Ensemble:

Like his previous albums, he has a supporting cast of rappers to play characters to help progress the story along. Cormega, Queen Herawin of the Juggaknots, Stricklin, and A.G. all play a part in Ace’s high school epic. The level of detail Ace displays for a youth that he is now light years beyond is astounding, from having skits involving his high school football coach and school bus driver to “Mother’s Regret”. Featuring Queen Herawin, that song tells the story of Ace’s teenage crush on an older woman and how she steadily declined due to drugs. As with all of his albums, Ace includes a track that fits with the album’s concept and is one in and of itself. “Mathematics” is that track and, on the surface, it conveys young Ace’s experience in a high school math class. On the other hand, it’s a lyrical song incorporating mathematical wordplay as an extended metaphor for Ace’s drive and confidence.

Considering this album plays like a movie, I do not want to provide any more information that would be considered spoilers. However, I will say that Ace’s adolescent journey also coincides with his first introduction to hip-hop in its nascent form, which made it a parallel to the now-cancelled Netflix hip-hop series “The Get Down”. Ace continues to dazzle listeners with the cinematic creativity he brings to his albums and it has made curious if this “Benjamin Button” trademark of re-examining iterations of his youth will continue on his next solo album. Though anachronisms exist throughout his projects, they’re pretty solid all the way through and “The Falling Season” is a welcome addition to his catalogue.