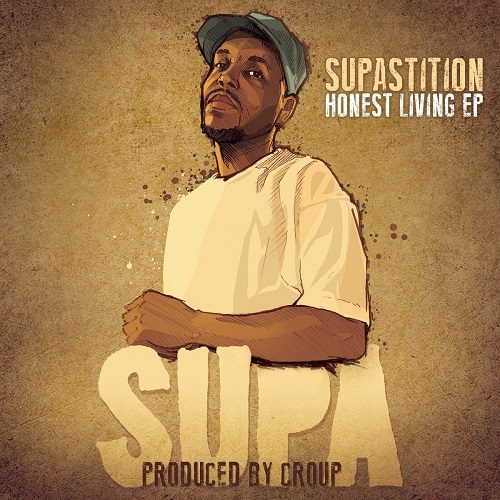 The return of Supastition last year wasn’t exactly greeted with fanfare and adulation from the hip hop community, except for those that regularly check the underground scene. He returned in 2013 with the impressive “The Blackboard EP” that only ended up being reviewed by RapReviews. It’s a shame, because Supastition didn’t take a break like a Jay-Z or Eminem can, he went back to working full-time to help pay bills and feed his family. It is easy to forget sometimes that many emcees are still pouring milk on to their cornflakes in the morning, changing nappies at two in the morning and completing any other mundane, yet necessary task we need to do to get by each day. Supastition is the voice of the real world lost in a genre that champions caricatures such as Rick Ross. You’d think that an emcee that raps about how hard it can be to find employment would be as boring as watching daytime TV, yet it’s somehow satisfying and something we can all associate with (unless you’re Rick Ross). There’s an ironic obsession with money that is from the perspective of those that don’t have it, yet want to earn it morally.

Supastition has this EP up on his Bandcamp site, and is actually allowing fans to download it for free if they so wish – inevitably making them feel guilty if they do. It’s supposedly dedicated to the working class, and as somebody that’s recently taken on a second job (on top of my 9-5) I can feel Supastition’s message more than ever. While I don’t live in “an area they don’t even deliver pizza to” as Supastition proclaims on “Honest Living”, much of what is said throughout this emotional, borderline angry track is so on point it’s hard not to nod in agreement. And that’s discounting the smooth instrumental from Croup that is minimal yet catchy as hell. Peep the truth on display:

“Even though I don’t got a pot to piss in
I got a mission, I’m optimistic
Gotta drop the negative views blocking my vision
Gotta pocket dollars quick like it’s nobody’s business
Racing against the clock feels like I’m chasing the second hand
Up ’til the point where I’ll take any job that you recommend
Forget about the fact I’ve been on multiple tours
I’m not too high on mine to work at a grocery store
Or any place that I’m employed,
I got pride, don’t think my mind is missing
What kind of man is ashamed to make an honest living
I mean, my children got food, clothes and shelter
And I’ma be embarrassed, come on what kinda times you live in?
Where dope dealers get more respect than nine-to-fivers
What kinda man would be ashamed to make an honest living?”

Before “Honest Living” is in danger of becoming “Depressing Living”, Supastition offers a positive approach to his hard-working mentality on “Nothing Like It”. When was the last time you heard a rapper say something like “the best feeling is having a family chilling, and waiting to greet you after a 10 hour work shift, the perfect smell of a home-cooked meal, the feeling of helping someone based on your own good will”? It may look a bit sickly, but the catchy hook and bass-driven production let the track reach that coveted area of hip hop – dope rhymes and dope beats. It’s that simple, and there’s no hiding the fact that “Honest Living” is a simple formula: Croup provides some licks of the bass guitar, crunching snares and a vague melody, and Supastition raps about scenarios that perhaps some of us don’t want to hear about. But the message throughout “Honest Living” is just that, it’s honest and it’s LIFE. It may be morally correct and takes a swipe or two at those rich enough not to have to worry about their finances, but it’s a message that is more than welcome when many of us don’t just lack cash in our pockets, but OWE money. It’s not just in Supastition’s native NC, but the world in general is suffering from a lack of money. With economies struggling and unemployment at record levels, it’s surprising to find ‘the struggle’ such a rare theme in popular hip hop when the struggle is what many of us are experiencing. Supastition has provided another short yet sweet EP that feels a lot like a friend on the other end of a telephone, sharing what he has been up to this week. It’s authentically delivered and thankfully not bogged down in jealousy for those that have wealth and comfort. The only downer is that this is only five songs long, and EPs tend to get quickly forgotten in this day and age where emcees are dropping multiple albums/mixtapes on an annual basis – but then twelve tracks based around jobs and working life could have been a bit too real. And when it comes to hip hop, there’s not many higher compliments than an emcee that is capable of being TOO real.