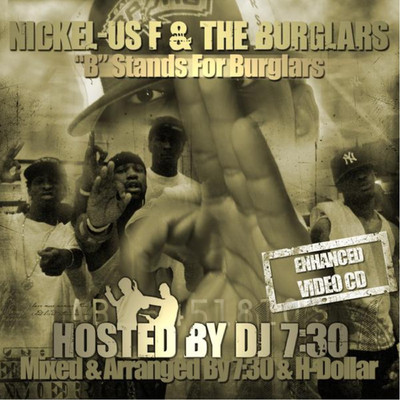 Nickel-Us F & The Burglars :: ‘B’ Stands for Burglars

The mixtape has never caught on fully with the hip-hop crowd, especially those who are more than just casual listeners. When a record comes in this format, buyer beware. The quality of material is usually up to par, but it is up to the listener to sort through a plethora of music to find the good stuff. Mixtapes in general, even ones that concentrate on one artist or crew, don’t appear to have any sort of method to their madness. Mostly it’s just a lot of exclusive freestyles with some fleshed-out songs thrown in for good measure. In many cases, the mixtape is just to whet the fans’ appetites for what is to come.

If this is the purpose of a record like this, “B Stands for Burglars” plays its part reasonably well. Nick Fury, the frontman of The Burglars, is on full display in anticipation of his forthcoming EP. He has a handful of solo joints and several freestyles as well. “Gritty Grime” is his first exhibition, as he rides a wicked bassline with style:

“We birds of prey, y’all rubber duckies
Washed up artists, the paintings you paint are smudgy
But I’m an artist painting lots with rap
I put blood and sweat on the canvas like a boxing match”

The Burglars’ group effort “The Cost to Floss” is another gem, as each member freaks a Kanye-influenced track. The bouncy pianos and sped-up vocal sample are the real stars, though, as none of the emcees runs away with it. Despite the lack of originality, the production has a head-nodding quality that can’t be ignored. “Burglar Love” flips the same formula as well, though it doesn’t mesh quite like its predecessor. Regardless of the novelty factor, both of these crew collabos find success through pure catchiness.

A plethora of songs give the artists within The Burglars their shine. With few exceptions, however, the solo efforts would have benefited from some help. None of the emcees distinguishes himself from Nick Fury, who is clearly the alpha male of the crew. Much of the production beats the whole soul-sample fad to death as well, which is suicide when not done correctly. For this reason, when they try something new on the musical front, it seems out of place. The group joint “We On Fire,” especially, should have been left off, with its makeup of bouncy drums and lethargic hook. Additionally, none of the freestyles contribute, they just kill time between actual songs.

At 25 tracks deep, “B Stands for Burglars” is excessive even for a mixtape. By freestyle number five or six especially, the skip button will start looking increasingly attractive. The crew starts off strong, but can’t maintain over a full-length album. The mission was mostly accomplished, however. After listening to Nick Fury by himself, it is evident that he has established himself as the main attraction. At the very least, people will start getting amped for his upcoming EP. As mixtapes go, this is pretty standard stuff, with a few exceptional moments thrown in.