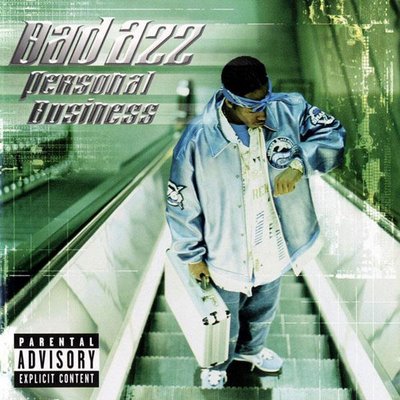 While the label formerly known as Death Row still hasn’t come up with any substantial or significant releases, rappers who at one time in one way or another were doing business with Suge Knight have picked themselves up and continue to strive and in some cases even thrive. Bad Azz was one of the first to sue Death Row for engaging in some type shady business moves resulting in him not being correctly credited for his guest appearance on the Makaveli song “Krazy”. Basically, the guy was on a multi-platinum record and didn’t see any money from that. I don’t recall how this matter was resolved, but if Bad Azz was able to get his name out after all, it was more due to his own brilliant ’98 full-lenghth debut and his guest appearances on albums by Snoop Dogg and the Eastsidaz. It comes as no surpise then that his sophomore effort “Personal Business” sails under Snoop’s Dogghouse/Doggy Style flag. I simply wonder, if Bad Azz has some ‘personal business’ to attend to, why then does he bring so many people along with him? This album is riddled with guest spots; but if there’s one rapper that would do just fine without anyone interrupting it’s Bad Azz. The man can hold his own.

But these days with rap albums you have to take the good with the bad, and the good definitely outweighs the bad here. Up front the beats have to be mentioned. There was a time when Westcoast beats blew everyone and everything else away. A similar momentum has slowly been building up these past years, with producers like Daz Dillinger, Fred Wreck, Jelly Roll, Blaqthoven, Battlecat, LT Hutton and good ol’ Dr. Dre (with a little help from Mel-Man), steering the sound in a brighter direction and taking both the rapper and the listener for a smoother ride. These days the West leaves it up to the South and the underground to get dirty and does what it does best: construct tracks that are the equivalent of chromed out cars. But don’t get it twisted: while the paint on these car-bodies may be candy, the chassis remains heavy metal. These beats bang as hard as the notorious L.A. gangs. Save for Daz and Dre (and Mel) all the producers mentioned above help Bad Azz out in the beat department.

On the vocal side, you have the distorted harmonies of Kokane, Jelly Roll, Suga Free and Butch Cassidy (add Snoop’s Snoopy Collins alias to that list) and Bad Azz’ characteristic photo-realistic delivery that’s somewhere between a husky bark and a vicious bite. I always think of Bad Azz as a more gangsta Xzibit. Although he gets down and dirty quite often, he also maintains a bird’s eye view on the problems facing Long Beach, L.A. and the world as a whole. The drama on a Bad Azz song never unfolds for its own sake. It’s all part of the message. It’s his consciousness of what’s going on and why it’s going on that makes him much more than just a ‘reality rapper’. Bad Azz’ has a message, and that message is: get yours. Unlike others in the rap game he isn’t stuck in elementary with that ‘Look what I got, you wish you could have what I got’ behavior. He doesn’t dazzle his audience with how icey his wrist is. He makes that clear from the jump, in the intro to “U Don’t Wanna Be Broke”: “I came here right now to put a little hope in the hearts and the minds of those have-nots… y’all can have it too.” In order to sound convincing, he has to have some authority on this, so yes, he refers to himself as a “hood-type nigga made good”, but he’s quick to add that everybody “should recognize life is more important / every second that goes by, it’s only getting shorter / we order death at the burger stand / murder stands closer to love than hate / wait – drugs are more abundant than faith.” And they work like this: “On this one-way street of life that ends in the middle / there’s a little time left, let’s hit the liquor store and get some liquor, nigga / drink away the drama before it leads us astray / wake up drunk and do the same thing the very next day.” When it comes to the dangerous side of the Cali lifestyle, Bad Azz knows the deal:

“It’s like craps on the dice, bustin’ caps on a bike
and flee-speedin’ down an alley
thinking: Damn! It’s somethin’ ’bout Cali…
It’s the water or the Cavi
Nah, maybe it’s the bitches and the sunshine
Fool, it’s the palm trees, cool breeze and one-time
This the home of ragtops and swimsuits
We wear Chuck Taylors, nigga, we don’t fuck with Timb boots
We 2Pac with it, we too hot with it
Keep two glocks with it, shoot two cops with it
We on the block with it, raw, non-stop with it
Run up bustin’, nigga, cause we ain’t cockin’ shit
We in the chamber off safety
You in danger if you hate me”

The next three tracks continue the theme. Corresponding to its urgent message “Get Yourz Now” is fast paced, while “Ready 2 Bang” proceeds more cautiously. For “Streetz Illustrated” Bad Azz gets assistance from Ice Cube and while Cube comes off okay, it’s the young gun who captures the action vivdly:

“This rat race called life is just like shakin’ the dice
To pray for your life ain’t always makin’ it right
I’m safe in the light but subject to the dangers of dark
They aimin’ at y’all and we the ones mostly involved
It’s mostly for y’all, it’s costly, they don’t know me to pause
And see, the truth is, I don’t feel they owe me at all
Your focus is small, a nigga either broke or he ball
And me, I smoke till I choke and I cough
Drink till I fall, sometimes I ain’t thinkin’ at all
but I don’t break to take my eyes off y’all”

In the title track he reveals what he means by ‘personal business’ – life itself is at the same time a personal and a business matter to Bad Azz: “I caught the game tryin’ to kill me and found out it’s been several attempts / it hurts to know this shit gettin’ so personal / what’s worse is though, you know you can’t do nothin’ about it / least we know the world’ll never be crowded… / The same thang that make you laugh’ll make you cry / the same game that got you rich’ll make you die / Fuck the truth, we like livin’ in a lie / It ain’t no time to try to find my lost mind / I’m on the grind, I got rent / I need nickels and dimes without a cent / And life is a personal business / sell your service, not your soul / if you ain’t got no dough.”

But let’s give Bad Azz a break to hook up with some of the people around his way. The Walter Hollis-produced “We From The LBC” finds him trading verses with Snoop, the sweet yet sorrowful “Too Many Choices” reunites him with his Lowlifes crew as they reflect on the chances you take and the choices you make in life. This song reminds me of Coolio’s “C U When U Get There”. Like the 40 Thevz did then, Lil’ Beau (“I’m on top of the world and the bottom / yeah, it don’t make sense / on a chase for sex and presidents”) and especially Lil’ Tip Toe (“I wake up early in the mornin’ everyday, when the sun rise / just prayin’ for the world to come together before my son rise / and get old, and have to go through life without a daddy / just because a Caddy came through with a barrel pointed at me”) help get the message across.

Next up is the smoothly gliding “How We Get Down” featuring Doggy’s Angles, and then “2001 4dr. Cadillac”. How this song got its title is a mystery – guests Butch Cassidy, Ras Kass and Sylk-E. Fyne never name-drop Cadillac (except Ras mentions a Brougham in the same line with a Benz). Bad Azz is even “smashin’ in a Bentley coupe through L.B.” so why then “2001 4dr. Cadillac”? Maybe because there’s four of them? Still, this is a cool song about waking up to a beautiful day and spending the rest of it with your crew. Funny enough the next song features “3 gangstas in a Cadillac”. “Money 2 Fold” mobs through with Snoop and Kurupt in the back with a heavy piano chord and busy beats emanating from the woofers and escaping through the windows. When you see these “Dogghouse Ridaz” (w/ Snoop, Goldie Loc, Kokane, Suga Free) riding by, keep your mouth shut, advises you “When You See Me” (w/ Kokane, Snoop, RBX). Or you might end up at the receiving end of Dat Nigga Daz and Bad Azz serving some of that ‘retaliation, revenge & get back’ (“Don’t Wanna Die”).

Towards the end of the album Bad gets back into his original stance. “Life Ain’t Never What It Seems To Be” picks up where he left to kick it with his homies during the mid-term of the album. Unfortunately “Wrong Idea” already appeared on Snoop’s “Tha Last Meal”, but the moving and soothing “It’s On All Day” and the supreme “Life Ain’t Hard” make more than up for it. To be really superior though “Personal Business” would have to cut down on some of the filler material in the middle and maybe get even more personal. I might add that business beef has led to some tracks not making the final cut and the album’s release being considerably delayed. So if instead of “How We Get Down”, “Dogghouse Ridaz”, “When You See Me”, “Wrong Idea” and the couple of skits there would be songs like “How Far Would You Go”, “Murderous MCz”, “Tha Money In Tha Briefcase”, “This Here’s 4 Y’all” and “Westcoast Plantation” (w/ X to the Z), along with the real “Intro: Da Birth (Born Bad)” – no disrespect to Mac Minista who I think did a nice job on the final intro – this record would be truly outstanding. Well, it’s not the first time that labels mess with our listening experience. While for most of them this is just a business like any other, it’s up to great rappers like Bad Azz to make it their personal business to make this rap business a little more personal.