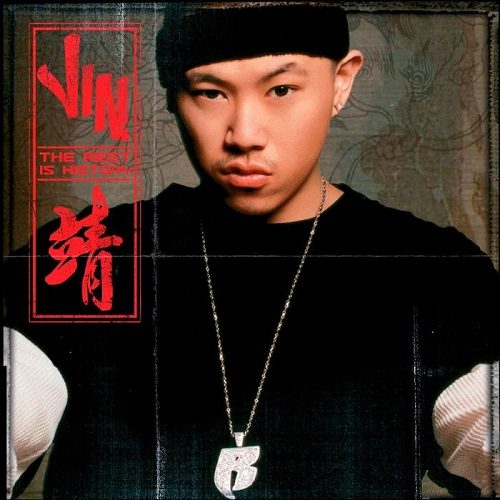 Jin :: The Rest Is History

I have to admit it, I haven’t watched 106 & Park for a while now. Free’s hot an’ all, but AJ gets on my nerves and the selection of videos they play seems heavy on the R&B and the little kid rappers trying to sell to an age group under 12. Then the e-mails started coming in. “Hey Flash, have you seen this cat Jin? He’s ripping shit on Freestyle Fridays.” “Flash have you checked out this Chinese rapper Jin? I heard after he won on BET that Ruff Ryders signed him to a deal.” Et cetera, et cetera. I’d heard this kind of hype before so I didn’t make much of it. Slowly though, Jin started bubbling up through the East coast rap scene. First he had a song on the 2 Fast 2 Furious Soundtrack

which seemed to confirm the Ruff Ryders connection. Then some dope tracks started leaking out from his unreleased album: “Learn Chinese” featuring Wyclef, and “I Got a Love” featuring Kanye West. Obviously Jin had some connections thanks in part to Double R, but more importantly he had skills.

While much has been made of his Asian ethnicity by the media in general and hip-hop press in particular, it’s really a non-issue to me – after all I still consider the Chops is definitely one of the top ten producers. They’ve been repping the Illadelph for years. You can go back much further than that and find Asian influences all over hip-hop, from the Wu-Tang Clan’s martial arts movie samples to the integral role founding member and rapper Fresh Kid Ice (a.k.a. The Chinaman) played in 2 Live Crew. There’s even a website specifically dedicated to the rising influence of Asian rap in hip-hop. So what does this say about Jin? Simply that being Asian in hip-hop doesn’t make him unique these days, any more than being white does ever since everybody from El-P to Eminem blew up. Mind you, that’s not a bad thing. If hip-hop is really about self-expression and having a voice, it shouldn’t matter what color or race that voice is. As long as you have something dope to say and say it in a fresh way you get props – end of story.

Jin certainly has a unique sense of humor about his situation though, having battled his way from being a no-name rapper to signing with one of the most infamous clique’s in all of rap music. Jin’s “Intro” on “The Rest Is History” is proof. He starts out dealing with a phony schmoozer acting as his agent, signs the record deal to make him a Ruff Ryder, and immediately thinks he’s going to meet DMX and start recording his album. Instead one of the RR crew tells him he’s going to have to “do donuts” on a bike, and Jin responds “well I am kind of hungry.” Comedy! Jin immediately shatters all doubts about his credentials on the opening track “Here Now”:

“Look I’m not a gimmick, there’s not a rapper I’m tryin to mimic
My life move bout a mile a minute
Make the best of it while I’m in it; talk shit I’ll never get offended
If so push it to the limit
I can shake off twenty haters, ignore ’em and handle my business
Holly-hood got my name cemented
A threat to every rapper in the game or that’s ever been in it
Five-six, but I stand tall
Built for war, sorta like the Great Wall, of China
Hear my footsteps like Yao Ming’s behind ya – don’t remind me
Do whatever to you, fly back and it’ll be hell on earth for you to find me”

It’s hard to pin down the sound of his voice, since Jin was born and raised in Florida but honed his craft on the streets of New York when his family moved to Chinatown. It’s a little bit Jadakiss, but mostly his own unique flavor. Jin likes to drop a cultural punchline here and there, but it’s certainly not a crutch. Songs like the JR produced piano-infested “C’Mon” are the proof in Jin’s pudding:

“First of all I had the thirst of all rappers combined
Worst of all people told me I was wasting my time
Like I was better off making up computer designs
A doctor, a lawyer, or anything that’s usin my mind
When I used to rap I usually got refused and declined
’til I felt abused and used it as fuel in my rhymes
In every battle, the race card was my downfall
’til I read +The Art of War+ and used it to clown y’all
I’m still battlin but on a different note
Not rappers, but labels, same ocean but a different boat
Them CEO’s must be sniffin coke
Don’t they know that I’m the dopest product on either coast?
They tried to drown me, but I stayed afloat
Here’s a verse for you to quote – the realest shit I ever wrote”

There is star power to be found on the album, but it doesn’t overshadow Jin in any way – it just adds more clout to the mix. Swizz Beatz is on “Get Your Handz Off,” Twista is on the high-octane bomb “The Come Thru,” and Styles P is on “Karaoke Night” amongst others. Through listening to the album, it’s apparent Jin is everything he says he is through and through – a dope MC looking to make a name for himself regardless of whatever other people think. Jin’s light-hearted attitude is also a fresh air amongst an East coast scene that’s often far too serious, with a “Club Song” that mocks the stereotypes of club songs with laugh out loud lines like “if I was Papa Smurf, you couldn’t give me blue balls.” The only thing that might hold Jin back a little is the selection of beats on the album. While most are good enough, the ones that are lackluster really stand out when a talented MC is trying to make something out of nothing. “So Afraid” has a melody in the background that borders on irritating. “Love Story” is actually hurt by having an overused Isley Brothers backdrop, even though it’s an otherwise fine song. The aforementioned “Get Your Handz Off” isn’t a Swizz beat, but Neo does his best to imitate his worst qualities – being noisy without really being good. Thankfully these tracks are exceptions as opposed to the rule, so “The Rest Is History” works quite well as a whole. Above all else Jin has proved that his Freestyle Friday victories and his signing to Ruff Ryders was not a joke – and if anything is the best thing to happen to that crew in a long time. So what ultimately is history here? All of the haters who are swinging on Jin’s nuts.