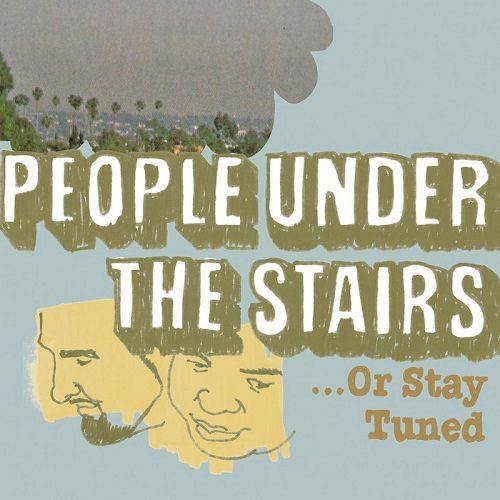 People Under The Stairs :: … Or Stay Tuned

Double K and Thes One are one of the best kept secrets in rap music. Perhaps that’s why they hang out under the stairs so much – their hip-hop can only be found behind your imagination and underneath the surface of the visible realm. While their name would seem to be drawn from the Wes Craven horror film (classic to some, classically bad to others), what they’ve locked away isn’t in any way vile or repugnant – it’s just natural hip-hop skills that are sadly not nearly as exposed to the light of the mainstream as they should be. That hasn’t stopped them from releasing four albums since 1999, showing a steady progression in dopeness that’s second to none among the L.A. scene or anywhere is in the world of hip-hop.

P.U.T.S. epitomize the DIY ethic of underground rap. On “… Or Stay Tuned,” the follow-up to their well received “O.S.T. (Original Soundtrack),” the duo handle all the duties involved in creating this sonic gem. They write their own lyrics. Double K does all the scratching. Thes One does all the mixing and recording. What’s most remarkable about this is not how they handle so many different duties with such excellence, it’s that their album proudly proclaims it was all done organically: “no computers were used during these sessions.” How many artists in any genre today could make that claim? Of course if the tracks weren’t all that such boasts would be meaningless, or foster the argument that maybe they SHOULD have booted up a PC to keep track of everything. Yet from the very opening track of this all too short 42 minutes CD, P.U.T.S. make one thing clear – they will not “Yield” to doing anything ordinary:

Double K: “The unaccounted for duo bringin down your charts and Billboard
That process boy it got me real bored
And I’ma ignore, settle the score solidly
Provoke my thoughts violently, knock you out your Wallabees”

Thes One: “All y’all weirdos take heed
Double K and Thes One have blessed one for the seeds
While y’all mousetrap and get caught up for the cheese
Cool cats droppin shit on the litter”

Indeed they are. The rhymes are not necessarily the most provocative or punchy in rap, but have a natural flow that’s fondly reminiscent of the height of the Native Tongues era, when everything that A Tribe Called Quest put out made you smile like a sugar addict on Halloween night. When Double K proclaims their music “soothes the women like night swimmin in a hot tub” and that they “rock clubs like Tiger Woods” on the track “Plunken’ Em” it’s neither an idle boast nor an overly cocky moment of braggadociousness. It’s more of a statement of fact and of purpose, a confirmation of their mission to create music that’s not only artistically pure but aesthetically pleasing. The simple track titles are self-explanatory, from their “Fly Love Song” to touring the world as “Roadbeaters” to rocking the “Drumbox” like a Jurassic 5 throwback track. They may be the only group in hip-hop who could call a song “Yo” and have it sum up their vibe so perfectly:

Thes One: “I stay so cool he freeze coliseums
Man the kid shine so bright you sneeze when you see him
He still hasn’t changed, tradin records for per diem
Guaranteein, new additions to his wax museum
Man I’ve seen it, his collection grows, it’s quite incredible
Huntin down them records like the damn things were edible
At this context, he’s too complex, you’re oedipal
Y’all motherfuckers only produce poetical perfection
in hypothetical selections
for your general public, expecting a soft subject
Man this medical touch, not budget but worth it
Impregnates the track, jump back and then birth it
Word is born, now his word plays all day
At that fancy daycare over by UCLA
While he sits at home, makin beats, drinkin the Heine’
Puttin new breaks on drum pads like Meineke
I finally seen him one day, chillin with his group
He was eatin at Ochollos sippin tortilla soup
I said ‘Thes, yo I’m feelin all them old jazz loops
Can you make me up a track man I got a little loot?’
He said thanks but don’t thank me, thank the forefathers
They deserve the credit, nowadays nobody bothers
I paused, I said true, he took a sip of his stew
He said, ‘I’ll dig you up a beat like Super Mario 2′”

There you have it in a nutshell. Double K and Thes One represent hip-hop at it’s core, describing themselves as universal b-boys who just do it all naturally, and they do indeed. There’s just something wrong with rap when People this good go unnoticed by the musical masses. Don’t just “Stay Tuned” to their rap this time, do yourself a favor and check out their whole catalogue. They’re well worth digging underground to find.