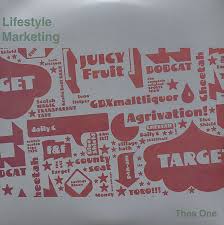 When heads first heard that Thes One was “going commercial,” a resonating three-sequence clicking could be heard from the collective “WTF,” “OMG” and “LOL” combos typed across the online hip-hop community. But Thes, who’s never been one to make it rain on hoes, isn’t going for a drastic stylistic change on “Lifestyle Marketing.” If anything, he got even more obscure and creative, exclusively tapping the vaults of commercial jingle composer and jazz pianist Herb Pilhofer. The result isn’t far from what People Under the Stairs fans have come to love, but with a little dash of gimmick, it’s all the more fun.

It isn’t a revolutionary concept (Oh No stuck to the works of Galt MacDermot for last year’s “Exodus Into Unheard Rhythms”), but what sets “Lifestyle” apart is Thes’ decision to include the very songs he sampled in the second disc. Seeing how he chopped up the original material should be a treat for fans across the genre, but the finished product ain’t bad either.

Thes has always grabbed listeners with his organic sound, ear for obscure, infectious loops, and perfectly complimentary percussion, and “Lifestyle” is no exception. In fact we see him more than ever intertwining vocals and melodies to craft his beats, and combined with the charming quality of Pilhofer’s music, the result is funky and original. Heads old enough to remember will probably take it as a nostalgic blast from the past, but virgin ears won’t complain, as they’ll soon find that these 1960’s commercials were insanely melodic and complex.

The two-part “Northwestern Bell” series is a particular highlight, where the first installment utilizes a gorgeous vocal sample urging you to “get on the phone,” further complimented by an intricate guitar melody. “Cheetah” is an industrial banger, electric bass and hard riding hi-hats enveloping Pilhofer’s exotic vocals, while “Target” sounds like the classic boom-bap that made PUTS who they are today.

Before long Thes even breaks into jazz mode on “Crystal Sugar,” and shapes a subtle bossa nova suite on “Pan Am, Pt. 2.”

Still, some of the things that made classics like “OST” so good aren’t here. The lack of Double K, for one, doesn’t help, but mainly the lack of variety. Pilhofer’s music is fantastic for sampling and Thes works wonders, but in limiting himself to just one source, he also puts a cap on his producing. After years of being a house party connoisseur with PUTS, part of that appeal is suddenly gone, as “Lifestyle” is an instrumental album. In fact, the album itself began as an experiment and personal challenge, a project centered around music Thes claims gave him “that feeling.” It just so happens that it turned out very dope.

Thes’ knack for taking an unassuming commercial jingle and turning it into a banger is a testament to his skill, and should be incentive for heads to check out the rest of his catalogue. As a double disc, “Lifestyle Marketing” is not only the best instrumental album of the young 2007, but it’s hella bang for your buck, so get up on that, yo. It’s sure to give you that feeling.