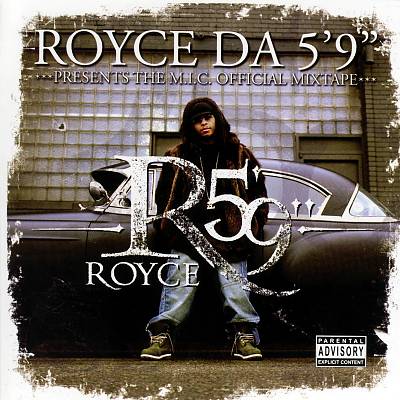 FLAME-ON! Very few rappers can stay mad as long as Royce Da 5’9″. Sure Nas scorched Jay-Z with “Ether.” But just when you were expecting that demonic Mortal Kombat voice to banter “FINISH HIM” and Nas to rip out a Roc spinal cord, his temper tapered off and he lost interest. (Must have been Kelis.) Jay-Z was never mad in the first place. “The Takeover” was probably a marketing ploy, considering how the concept of “beef” was just re-turning trendy in 01′ with Eminem’s verbal massacre of every man, women, and child in sight. Who, by the way, is also finding it harder and harder to fuel the fire. Canibus is probably the only other MC who manages to keep himself in a perpetual state of concentrated anger. Sadly, his untamable rage forced him join the military after he had eat eat eaten all the MCs within earshot; while LL just went home, did about five hundred push ups, and had sex with Marky Mark.

Royce however, doesn’t look to be cooling down anytime soon. Ever since his disgruntled divorce with the Shady/Aftermath camp, Royce has been starting fires like a rap pyromaniac. Fortunately, Royce has managed to preserve his tenacity by remaining viciously bitter towards pretty much the entire rap industry. And it’s great! His interminable zeal has pushed four albums in four years over four different record companies. (Not counting numerous mixtapesâ€¦well mostly distracks, but just as heated.) And his momentum seems to be snowballing with every release.

Royce continues to carry that exasperated demeanor into his new album, “M.I.C.” Marcus Garvey starts things off with “Buzzin,” an extravagant, orchestral ode to Royce’s surmounting street credit and rising reputation. Its colossal power seems to encompass all the aggravation and disappointment built up behind Royce’s previous releases.

Nottz covers the next two tracks, “Nickel” and “Jump.” Both are very expectant of what a Royce track should sound like -and that’s a good thing- as they bouncy and layered, with enough space to accentuate Royce’s gyrating flow. Nottz was originally slated to cover the entire album, as a collaborative effort, but was inexplicably replaced by Asar, one of Royce’s previous producers. Thus, the album resembles the congenial blend of musical syntax that prevailed in his previous albums: a light, itchy, drum beat, mostly snare, that stirs gingerly into a general ambience of instrumentals. In any other artists’ case, I would presume the passive mix of “Gone In 30 Seconds” and “On The Road” would falter the rapper’s lyrical flow. That the jittery snare of “Switch” would lack the well defined rhythm necessary to rhyme well over. But that’s with any other artistsâ€¦

Royce creates his own rhythm with careful pacing, control, and word accentuation. He keeps you tongue-tied to his lyrical whip, listening to every word, following every twist of diction. “Simon Says (Street Games)” bangs out to that westcoast synthesizer style that Dr. Dre patented in the early nineties. While Royce yanks your around “52 Bars” of contorted violins and punchy drums as he counts down lines.

The only prominent problem with “M.I.C.” is the overflow of guest appearances by Royce’s entourage, aptly named the M.I.C crew. At times, the album begins to feel like a group debut instead of a solo album. Collaborations like “No Talent Rappers” and “Switch” aren’t detrimental to the album, just diluted, as Royce is forced to share the spotlight with two or three other rappers that are lyrical peons compared to him. No need to fret though, there are plenty of dope solo tracks left over, like “F-ck A Hook” and “Back In The Days,” that showcase Royce’s exceptional talent and unacknowledged potential.

“M.I.C.” might not flaunt the blatant disses and name calling that you have almost come to expect from a Royce release. But it proves that Royce can remain consistently motivated without controversy. It’s caulked full of the same vehement energy, dope beats, and potent lyrics as his last trio of releases. But is not liable to piss anyone off. Overall, Royce is not letting the flames fetter. He’s not letting the coals cool. He’s throwing fuel on the fire, and burning brighter. Pretty soon somebody has got to see the flames.