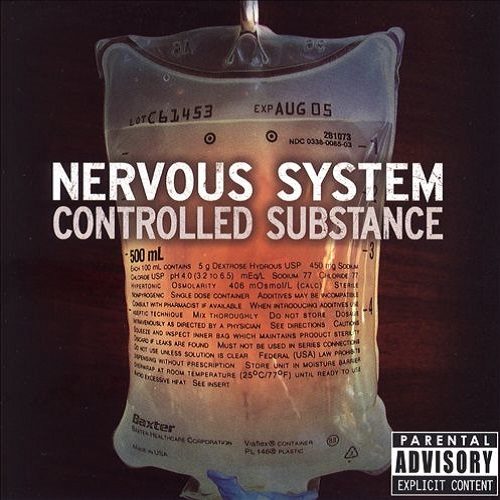 Nervous System is something quite different. As time passes on, rap, just like rock, has spread out into several sub-genres such as “R&B”, “conscious rap”, “southern crunk”, or even “old school” to name just a few. However, what pushed the expansion of these branching marketsâ€”pure expressionâ€”is now discouraged by record companies demanding that their artists â€˜fit a niche’ instead of find their place. Nervous System counters this impeding categorization of rap by confidently meshing varied groups of music together, in an attempt to form their own style.

The group consists of two male MC’s, Polarity Plus and Eclipse, and one fisty female, Sol Storm, and although their names might make you think of cameo characters in an X-Men movie, the trio comes together quite comfortably in some kind of rampant, electronic jam. The album’s opening track, “Nervous!”, shows the energy and confidence the group brandishes even though they stand somewhat outside the norm. “Sip on Dis” is a funked up mix electronic ambience and foraying freestyles. The euphoric atmosphere sobers up with “Sick”, a much more aggressive, hard talking track. You can dance the Spanish fandango to “Hip Hop Tango”, then hit the back seat with “Casual Sex”, a slutty song full of quick pick-up anecdotes and after-school warnings of promiscuity.

Around this time in the album, five or six tracks deep, a shaky suspicion seeps into the electronic pandemonium: Nervous System sounds an awful lot like some generic brand Black Eyed Peas. The funky, freestyle construct. The ecstatic energy. The commonsense conscious raps. It all starts adding up. All the sudden their exulted originality comes under questions of biting the BEP. It is certainly a smart, marketable move considering The Black Eyed Peas’ second-wave success put them at the top of the charts, not to mention getting more commercial endorsements than Kobe (pre “rape” Kobe). If Nervous System is trying to bite off of the Black Eyed Peas’ success, they will play second fiddle. No one in the group has yet to show the musical genius of Wil.i.am or lungs that could shatter The Louvre like Fergie’s. It’s hard to say for sure, but nevertheless, Nervous System certainly sounds great based on their own merits. Now as for their namesâ€¦

One element that certainly helps Nervous System sound unique is the electronic production. Pinging, high-pitched piano keys, jittery bass beats and dense background noise give the music a sense of electronic ambience. For instance, atmospheric tracks like “Lonely Individual” and “Guilty Conscious” feel extremely organic. Overall, “Controlled Substance” sounds like something put together on someone’s laptop; six hundred dollar synthesizer software pushed to its instrumental limits instead of drum sets and samples. And although some might prefer live instrumentals over simply mouse clicking, the album sounds cohesive, energetic and original by its musical design.

Unfortunately the album ends with its two worst tracks, “Broken Hearted” with Dave Harris of Planetside and “Eternal War,” both dabbling in hard rock and both painful to hear. “Broken Hearted” might be tolerable if Harris’s sour, Bon Jovi-esque vocals didn’t sound like some lush throwing up in a bathroom stale, while “Eternal War” stands as another example that hard rock rarely works with rap (somehow Korn pulls it off). Although the group’s continual instrumental experimentation with everything from Latin music to Reggae is admirable, it runs a little sour here on hardcore guitar whaling.

As far as content, the group’s lyrics balance somewhere in-between gangsta rap, as in “Stick Em Up” and “Sick”, and the lightweight conscious rhymes found in “My Enemy” and “Critical Breakdown.” The group never convinces you they are serious though. Their freestyle-like rhymes usually lighten the mood on even the darkest tracks. It makes for a very fun, energetic album. The trio seems to have established a powerful creative chemistry with each other, and if they can stay there, grow together, evolve their soundâ€”anything is possible. I compare them to the Black Eyed Peas, but even the BEP took a few albums to find their funky, tart center. Overall, “Controlled Substance” is a very strong opening album by a group packed with pure, artistic talent.