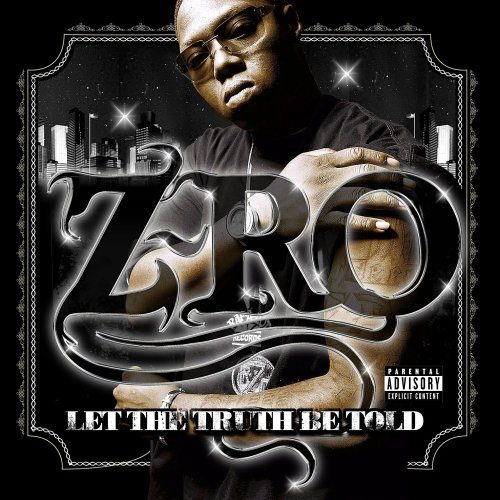 Although the Houston native has been on the rap scene for far more than just a minute, it was last year’s “The Life of Joseph W. McVey” that put Z-Ro on the map for rap fans outside the Dirty South. Or did it? Let’s be real here, that’s the cliche thing to say whenever a popular rapper from Texas or Louisiana or Florida gets national distribution, but it by no means proves people North of the Mason-Dixon buy the shit. Obviously getting a major label record deal is the first step, and getting some press in magazines other than Murder Dog helps, but that still doesn’t guarantee you spins in certain markets. New York likes to play with the Southern sound now and then by having T.I. on a record or signing a Nashville artist like Young Buck, but when it comes to taking the shit seriously you may be hard-pressed to find anyone on the air other than that Prince wannabe Andre Benjamin. A song like Lil’ Flip’s “Game Over” may blow up national now and then, but the only way you’d really hear B.G., Devin the Dude or Z-Ro outside the South is to either own their records or just happen to be listening to XM satellite radio at the right time of day.

When you get right down to it, there’s really no excuse. People down South aren’t afraid to bump it if it’s good, whether it’s W.C. or Jay-Z, but some people hear the Southern accent or a hard’n’slow beat and automatically get the wrong ideas. Well “Let the Truth Be Told,” because Z-Ro is just as fresh as any other artists out there today getting the mainstream exposure and SoundScan units sold that he’s not. Here’s something to keep in mind – whether you live in the North or the South, urban is still urban and ghetto is still ghetto. More specifically, if you live in a metropolitan area, there’s no such thing as “country” – it’s all the same. Maybe the racists in the South are a little more open about it, maybe in the North they’re a little more sneaky about hiding it. That’s the major difference I see. But when it comes to music, hip-hop is universal, and has been for a while now. That’s why on the album’s opening track “Mo City Don (Freestyle)” you’ll hear Z-Ro rapping over the same beat as the remix to Eric B. & Rakim’s “Paid in Full.” And why not? That’s still a fat track, and Z-Ro is worthy to be ripping on it:

“Why niggaz wanna talk down? I don’t know
Gotta take a trip to Acapulco, from the 4
With my 4-4 on my side, when I ride
Ready to do another homicide in a pine box
And I’m gone, nigga old glory
I’m H-Town to Cali, just like Robert Horry
If I do a murder, flee the murder scene
When it’s a shortage on the drank, I can’t find no lean
From Southwest to Southeast, bitch it’s about war not bout peace
Nigga like me, I’m bout knockin out teeth
Knahmsayin? I’ll loose your grill
A nigga coming down, in the Coupe Deville
Looking gravy, looking real throwed
I’ma be the nigga pullin over at the fuckin crossroad
With my K on my side, I’m ready to ride
And if I gotta go, it’ll be a homicide”

Does Z-Ro floss like a boss? Yes, you could say he does. Are his narratives about violence and mayhem? For the most part. Yet with those things said Z-Ro distinguishes himself from his less worthy contemporaries in four distinct ways: the deep baritone of his voice, the smooth breath control of his flow, the charismatic delivery of the words and the visual impact of the words he chooses. Those factors make even a song which could be as cliche as one titled “Platinum” into something that stands apart from the crowd, and the fast sing-song way he presents it over the Bigg Tyme beat is fly as hell:

“Bout time they opened up the do’ for Z-Ro
Cause I been droppin hits since ten years ago
Tryin to do it legal and not slang llello
If I can’t get it legal to the corner I go
I never took pride in slangin cocaine
Never could get a job but needed some mo’ change
CD’s wasn’t sellin because I had no name
Nothin but a t-shirt, no piece, no chain
Too many times I was ready to give up
Run up in a bank and say ‘This is a stick-up’
Put my pain on records and record sells picked up
The tears I done shed lead me to the big bucks
Two-thousand-and-fo’ I ain’t broke no more
Cause God is my life jacket when I sink so low
I went to a hundred thousand from a hobo
So all you haters hate me as I make a little mo'”

Personally, I appreciate the crucial distinction Z-Ro makes in the opening verse of this song. So many hard and wannabe-hard rappers today brag about selling drugs and making money from it like it’s the greatest, but Z-Ro openly says there’s nothing about it to be proud of and the only reason to hustle is if you’re so po’ you can’t get it any other way. It’s those subtle nuances to what he’s saying, the hidden gems within the rhymes that sparkle without blinding you, that put him on another level. Z-Ro can get his grind on with money muscle and gats, but even Ice-T would have to acknowledge Z-Ro’s most powerful weapon is the one inside his cranium after hearing “Respect My Mind.” He’d rather shoot you with verbal artillery, but he’s definitely not to be mistaken for a chump:

“Tragedies happen in my world everytime I breathe
So I’m paranoid and trigger happy until I leave
I got a 357, a 45, and a gauge
But Ms. Katie put mo’ motherfuckers on the front page
If I gotta pull a trigger I’ma shoot to kill
Not tryin to hurt ya, I’ma try to leave you stiff as steel
Cause I ain’t tryin to watch my back when I’m out in public
So when I blast that’s yo’ ass you went out and dusted
But I’m not tryin to send the wrong message to the kids
I’m just sayin even if you young they’ll stil split ya wig
And I’d be wrong if I told you to let a nigga do ya
I practice what I preach and ride with much more then a Ruger
I guess the Lord’ll deal with me at the end of time
I’m not a killer but motherfuckers gon’ respect my mind
That’s on my mama trust, nobody but friends to my kin
For the slightest disrespect I’ll put ya spirit in the wind”

Beats? Z-Ro’s got that. From Dani Kartel’s swing on “The Mule” featuring Devin the Dude and Juvenile, to Mr. Lee’s subtle understated hardness on “It Don’t Stop,” to the straight up funk of Mike Dean beats like “I’m a Soldier” and “Everyday, Samethang” it’s all good here. There aren’t that many guest appearances, but Z-Ro makes the ones that are here count – Ashanti on “1st Time Again” (sounds like a fly-ass sequel to “Fuck Faces”), Paul Wall and Lil’ Flip on “From the South” and Trae on “Don’t Wanna Hurt Nobody” and “1 Night,” it’s all tight. If you’re still sleeping on Z-Ro at this point, my advice is turn off your Hot 9-7 and get a late pass so you can go to the record sto’. Whether or not the haters are ever going to let hardcore Southern hip-hop get as much rotation as Puff Daddy is in the end no concern of mine, so long as Z-Ro gets his hustle on like Bay Area rappers do when it comes to selling the uncut dope. These days there’s plenty of ways to be heard without BET or MTV, and if you’re too wary of purchasing a Z-Ro album without hearing him first take advantage of some of them. Time to stop sleeping and wake yo’ ass up to the truth; once you do you’ll be willing to “Let the Truth Be Told.”