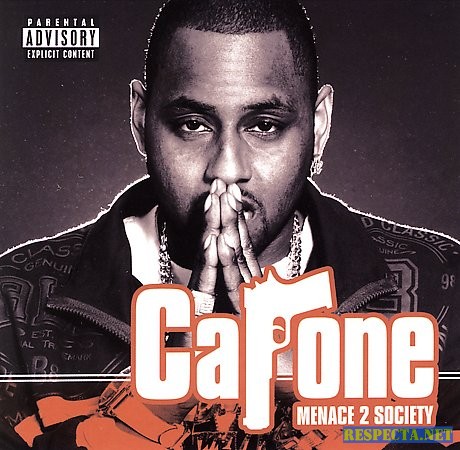 Since making his solo debut on the mixtape circuit last year, Capone has been hard on his grind trying to catch up with Noreaga’s long and prosperous solo career. Yet to achieve any commercial success at the level of his partner, Capone seems content catering to the masses that reside in NYC’s streets. On an even more independent level than his solo debut, Capone’s “Menace 2 Society” is a record that seems to ensure that we’ll never see Capone or Noreage revert to the gritty and raw reporting heard on “The War Report.” Following the current trends, Capone definitely matches if not exceeds the quality of similar recordings but doesn’t do it on a level to distinguish himself.

The album pops off with the Twinz produced “King of New York” which features a sped up sample on the beat and Capone spitting brags about why he embodies the role described in the title. “F.U. Your Honor” features an M.O.P. line that everyone should know and Capone spitting lyrics similar to those heard on the first track. “Troublesome” is a straight party track featuring Noreaga and Just Blaze dropping a beat that’s decent but definitely not his best. The track works well for what it is, though it doesn’t reach the energy level of any of Nore’s previous party starters. “Roll With Me” is a skippable track that begins to show a trend of Capone sticking to the same brags as his topic matter. “Aura” breaks up the monotony and finds Capone delivering one of his best tracks to date over a dope Frank Nitty beat:

“Y’all niggas is playing games, I beat your aura up
You know the streets is watching
I stick and move like I consider this boxing
My swollen aura got me hopping, reckless lane changing
In the Maybach with the instamatic coffee maker option
My aura come in bag, come in a slab
I get it right from uptown to QB in the cab
I’m just a seventies baby with eighties aura
Early nineties, floss my shit, the 4-5th inflate ganga
Aura like the Riker’s vipers
My life is priceless, nice, the trifest
In these New York streets I might just â€“
Leave New York if I wanna
And come back in a week and leak the next source first of the month
Old timers speak wisdom aura, Some of its learned from the tora
Most of it’s gained from they time on the corner
See, cuz I got aura, and you got none
It’s gonna take a lot more for you to stop me son”

Despite the content wavering along the line of every other song on the album, the track is somewhat creative and finds Capone adding a dope concept to his already high level of energy.

Reggae crooner Lexus drops by on “Fire” where both drop decent verses over an equally decent beat from Kev Kyze. Not the best rap/reggae collabo, the track still stands out on the album. “Hand On My 9” features newcomers 100 and Pinky Ring but neither emcee does anything to lift the track from its boring and played out topic matter. “Mac On Chill” is more of a remake of the previous track than a new one and lacks both in rhymes and bad Southern inspired beat. “Whassup?” jacks the beat from last year’s “Yes Yes Y’all” from the Geto Bboys and only makes you want to hear the original. The only other notable track on the album is the previously released “Fallen Soldiers” which can be found in parts on Nore’s “What Up 2 Tha Hood” mixtape and a previous Capone mixtape. Capone’s interpolation of verses from rap’s fallen soldiers is a dope concept and dope in execution also.

With the inclusion of obvious mixtape material and other sub par Capone performances, this release either marks the further deterioration of Capone from his CNN days or indicates that this project isn’t as official or thought out as Capone’s previous album. It’s definitely not the worst release I’ve heard by far, but it sounds more like a mixtape than an official Capone album. Some of the tracks are definitely worth peeping by fans of CNN and New York Street-hop, but otherwise Capone does little to differentiate himself from every other NY rapper. As a personal fan I still prefer to hear Capone spitting generic tracks over the latest mixtape cat, but next time around he’ll need to step his game up.