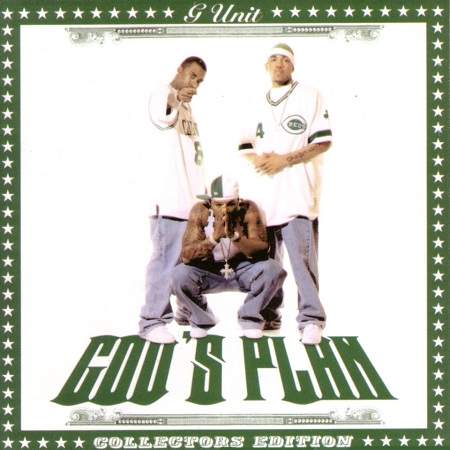 It’s pretty clear now that BCD Music Group is eager to cash in on the more obscure parts of the 50 Cent & G-Unit catalog, and those respective artists have absolutely no problem with it as long as they’re getting a piece of the pie. One after another these early mixtapes from when 50 was finally starting to blow up in New York are hitting the market, releases from just before he went national and international with hits like “In Da Club.”

The formula is as always the G-Unit rappers flowing over the instrumenals from other popular tracks. “Gangsta’d Up” is the perfect example, as they are not even trying to disguise in the title that the original source is the Tha Eastsidaz’ track “G’d Up.” I’m sure as hell not complaining as the original DJ Battlecat track was all that and a whole bag of Rap Snacks. Even though these street tapes were meant to showcase the entire G-Unit, as always it’s 50 Cent who comes in and steals the show.

“I’m from the bottom man niggaz know I came up hard
I got a temper man I’m looking for some shit to start
Man my tax bracket change, I’m sittin on some change
The hoes man they changed they don’t treat me the same
It’s not my looks that’s got me all up in them drawers
It’s the new M3 with the Lamborghini doors
Man them D’s they done turned them dogs into dopefiends
Smell a leak in my clothes so they barkin at me – WHOA!!”

Other easily identifiable musical jacks include “Deep Cover” being straight lifted for “187 Yayo,” the Angie Martinez “If I Could Go” being rewritten as “Short Stay,” and perhaps most blatantly of all Ms. Jade’s “Ching Ching” being turned into a song titled “Ching Cing Ching.” When they’re being that straight up brazen and unapologetic about it one can’t hardly complain – it’s not like they’re trying to fool anybody as to the sources or origins. All that really matters is whether or not the song works, and it’s safe to say 50 rapping over Notorious B.I.G.’s “The World is Filled…” absolutely does.

“Went out her way to let her know that I want her
I told her I – know fo’ sho’ we belong together
And I wouldn’t break her heart, my intentions are better
And I, shared the same dreams she had about cheddar
When the D’s came she was down to hold the baretta
I got a thing for babygirls, me and her against the world”

It’s impossible not to notice his star was rising on these tracks. The raspy voice, the slight slurring of his words, the calm and confident way he delivers his lyrical bravado, it’s all there. “God’s Plan” warms up slowly but by the time Lloyd Banks gets his shine on “Banks Workout, Pt. 2” it’s all there and keeps poppin figuratively and literally the rest of the way through. 50 Cent may have been the cream rising to the top on these releases, but he definitely didn’t hold down his homies or keep them from shining too – it’s simply that 50 had too much potential for too long to not break through in a big way.