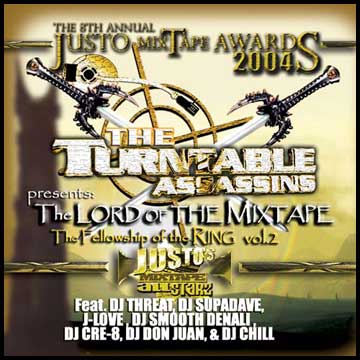 The Turntable Assasins :: The Lord of the Mixtape: The Fellowship of the Ring Vol. 2

It seems the death of Justo Faison, founder of the annual mixtape awards, has come and gone with little attention from the general hip-hop community. It’s not surprising, considering the average hip-hop fan didn’t know who Justo was or what he meant to the DJ/Mixtape world. But any mixtape DJ or fan will sorely miss Justo and his mixtape awards. In an oversaturated and generic mixtape world, the chance of getting recognized by Justo with a mixtape award was enough motivation for most DJs to dedicate more attention to the DJ part of their job instead of focusing on being hustlers. Evidence of the competitive spirit Justo brought out of DJ’s is “The Lord of the Mixtape,” released by a collective of DJs shortly before the 2004 mixtape awards and sponsored by Justo. Consisting of five different DJs, each spinning a different type of music during their set, the mixtape truly embodies what a DJ should be.

The mixtape kicks off with an intro by the legendary Supadave followed by an exclusive Jadakiss track from the late DJ Threat, who tragically lost his life in a car accident. This tribute to DJ Threat sets the tone nicely for the mixtape, showing the collaborative effort is competitive but still about nothing but love. J-Love kicks things off with his set of grimy underground hip-hop. Featuring obscure and exclusive tracks from the likes of M.O.P., Nas, Jay-Z, G-Unit, and the Wu-Tang Clan, the set is a throw-back to the mid-1990 rap scene. The highlights are the Wu-Tang contributions, especially Rza’s “Never” and the posse cut “Drummer.” Cormega comes through with a strong showing on “Bring It Back” and J-Love flexes his production skills on three tracks. DJ Cre8 changes the pace with his somewhat short set of R&B cuts. He hits off the listener with the popular “Diamonds” from Jaheim and D-Block and also the smash “I Don’t Wanna Know” by Mario Winans. He also comes correct on the obscure “Take A Look,” blending the Mahagony track with more familiar instrumentals.

The mixtape changes pace yet again with Smooth Denali crafting his set around old school Queens music. Denali’s set ranges from hip-hop classics like CNN’s “Blood Money” and Nas’ “Halftime” to more obscure Queens’ bangers like Tragedy Kadafi’s “True Confessions.” The placing of the set, right after a short R&B set, is a bit suspect, but the tracks included are sure to get any hip-hop head nodding. The old school theme is continued somewhat with DJ Don Juan spinning a set of classic old school reggae. Anyone will instantly recognize Dawn Penn’s “No No No” and the influence tracks like “Bam Bam” and “Kuff” continue to have on modern reggae and hip-hop. Don Juan even manages to squeeze in new school jams by Sean Paul and Alicia Keys. Though “Still In Love With You” and “You Don’t Know My Name (Reggae Mix)” were released in 2004, they are crafted with the roots vibe of old school reggae. DJ Chill ends the mixtape with a short set of Dirty South tracks, highlighted by the contribution from the late Solja Slim on “I’ll Pay For That.”

“The Lord of the Mixtape” is far from a perfect mix. The variety of the music included is both a bless and a curse. The sets are almost too varied and are oddly placed as the new school and old school NY hip-hop sets should have probably been placed together. Not all of the tracks included are of top notch quality, but the tape does offer less misses than most mixtapes. The last gripe is that the R&B and Dirty South sets are entirely too short to give the listener any idea of what DJ Cre8 or DJ Chill are all about. But despite these shortcomings, “The Lord of the Mixtape” is better than the average street mixtape. Most importantly, the mixtape captured the spirit of competition and creativity that Justo brought to the game, a spirit that hopefully will remain as a testament to Justo’s legacy.

The Turntable Assasins :: The Lord of the Mixtape: The Fellowship of the Ring Vol. 2
7Overall Score
Music7
Mixing7