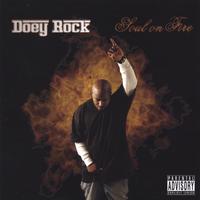 When you read enough press releases as a music critic, it’s not hard to get a little jaded. Everybody is big where they’re from. Everybody has opened for KRS-One, Talib Kweli and Noreaga. Everybody is getting spins and requests at a group of radio stations around the country. The story never changes, just the names of the key players. With this in mind expectations for Doey Rock’s “Soul on Fire” were not high. He’s not a familiar name, doesn’t have any big guest artists, and the biggest credit on his album is that Rick Rock produced a track titled “The One.” Every new rapper has to overcome these obstacles though – not just the jaded music industry critics out there but having the right beats for their tracks. A few rare MC’s are talented enough to do their own, or more accurately do them WELL. Some MC’s are such hot prospects their label will front the cost of every big name from Scott Storch to Alchemist being brought in to bang out beats. The rest just have to fend for themselves and either hope they know a good up-and-coming beatmaster or have the scrilla from their own hustle to get names.

With all of these things working against Doey Rock, the results that he achieves with his “Soul on Fire” review are impressive and quite frankly shocking. His press release may be full of typos and his claims of superstar status may be exaggerated, but the skills Rock displays lyrically are all legit, and the beats he’s cooked up for his tracks provide him able support. From the epic cinematic opening of the “Truthseekers” intro track co-produced by Stereotypes, Rock spits lyrics which instantly put him on par with any hardcore California hustler from the North to the South:

“Hard act to follow, hard pill to swallow
Ali with a pen, one everlasting motto
Early bird gets mo’ worm, so go to work I do
Cash’ll grow on trees and fall like leaves before I’m through
Patterns parallel, paranormal they float
Stereotypes, Industrial, raisin the status quo
Complex, contradiction, criminal too
First of many, my directorial debut, some real shit”

The pounding beat behind the words is worthy of any that Rick Rock himself would do. The lyrical fire Rock spits puts him on a par with the people like E-40 his press release says he opens for, and he even shows a little wit by taking a potshot at The Game with the line “I ain’t tryin to save the West coast, I’m tryin to save me.” Vocally he’s got a deep tone but he’s not slow-flowing. The release of the verbals is automatic fire quick and the diction as clear and crisp as Jay-Z, with that California accent twist you hear in each syllable, sounding like a mixture of Opio, Gift of Gab and Mac Dre. Rock is highly motivated on his 15 track album, which is a good thing since most new artists could not hold down that many tracks and stay entertaining. Rock is not only the exception to the rule, he rips mics hard on a “Daily Basis”:

“Let’s get to it people, people this is the rebirth
Necessary evil, rap music, the street’s church
Where the truth hurts and ‘caine is President, throw up ya turf
No time for hesitance, get your face burnt
Only way to learn is fall to the dirt, get up, dust it off
You went hard, now go hard and get your return
[…]
You are witness to the transition of a man to a giant becoming”

Rock’s so sharp that he “make(s)the pen bleed” on “Left Lane,” with “flows ambidextrous easy to interchange” on “About a Buck” and so confident that “this is not a test, it’s the final exam” on his title track. Rock may be a new jack to the rest of the country, but it’s clear from listening to his album that he’s no joke in his native California. He may not have the widespread distribution of some of his fellow artists, but this is one hip-hop artist you’ll want to look up on either DoeyRock.com to check out his music. Take it from this jaded writer though, Doey Rock is the rare and pleasant exception to the rule in a music world full of hyperbole. He’s got all the potential and just needs a bigger platform to step on and showcase his skills to the rest of the world.