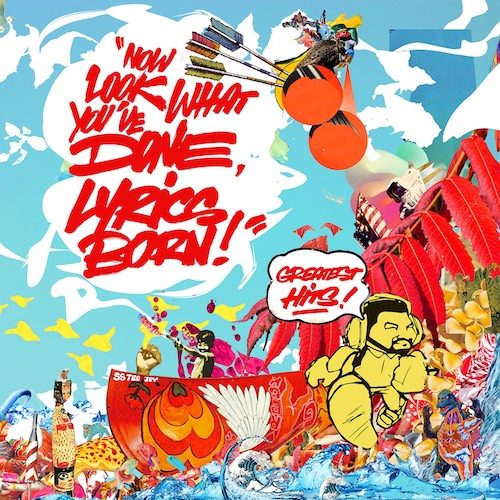 There’s no doubt in my mind that Tsutomu ‘Tom’ Shimura is worthy and deserving of a complation album – even one with the deliberately absurd long title “Now Look What You’ve Done, Lyrics Born! Greatest Hits!” It occurs to me as this review gets underway though that I’m far from impartial about the subject of Lyrics Born in general, or the entire extended SoleSides/Quannum Projects fam in particular. Back when I was a college radio DJ who had the officially unofficial title of “Assistant Programming Director – Urban Contemporary” it was my job to call up, write to, or in rare cases even e-mail labels (this is the mid-to-late 1990’s – not every label was on the web then) and hustle them for music. Even though it probably didn’t serve the interests of a West Coast label headquartered in San Francisco to service a low power FM station in central Iowa, something I said or did convinced them to hook us up. I remember those early days of DJ Shadow and Latyrx records with incredible fondness due to the crew’s musical and lyrical creativity – and for deciding that even some college kids in Ames could get down with it.

Fast forward nearly 20 years later and I’m a bit floored to think that I’ve been listening to Lyrics Born for that long. Obviously that’s a testament to Born’s musical perseverance to continue producing and releasing hip-hop through three different decades, not to mention a clear statement of just how much he loves and appreciates the art. Perhaps that makes the two exclamation points found in the title of “Now Look What You’ve Done, Lyrics Born! Greatest Hits!” that much more apt. This hour long album IS the exclamation point on a successful career – one which hopefully isn’t coming to an end just because he decided to sum up the highlights thus far. There’s certainly no reason to think it needs to given both he and his friends have cultivated the Quannum following one loyal listener at a time, and that devoted following means they can continue to record and tour as an independent without any mainstream exposure or major label push. Here’s how I like to think of it in 2016 – Lyrics Born and his friends were “Bandcamp” long before that became a model for indie hip-hop. If you wanted to succeed in the hustle, you certainly couldn’t go wrong copying their muscle, because they flex with or without big checks.

Having a good hustle is one thing. Having good MUSIC is another altogether. Hustles fall flat when they’re not built on substance, but Lyrics Born has always had an overflowing ABUNDANCE OF SUBSTANCE on his songs. It could in part be his unique background. Not many of us can claim to have grown up in Tokyo, Salt Lake City and Berkeley – but Mr. Shimura spent his early years in all three. Once he settled into the California life though he blossomed at UC Davis at a time when hip-hop on the West was getting hella experimental and creative. It was a perfect time for a kid who was Japanese, Italian AND Jewish by birth to get down with the bubbling sound of the hip-hop scene, and that uniquely ebullient hip-hop style has not faded for Lyrics Born over the years. You can hear it on almost every track compiled for “Greatest Hits!” but one that best exemplifies it for me (and is arguably the most mainstream recognizable song he’s done thanks to airplay on HBO’s “Entourage”) is the remix of “I Changed My Mind.”

“Well lookin back now as a young man, girl
In hindsight I regret
I never listen to my better judgment
So my blind side got the best of me
But we live and learn, what you did in turn
Made me never have to settle for less
And would I deserve and once you mature girl
You’ll always be second best”

The reason I want to cite this particular song is because the first time I heard it I really didn’t like it. I wasn’t a fan in 1999, but the Stereo MC’s revisit on “Same !@#$ Different Day” was enough to change MY mind too. These days the performance has only grown in stature compared to the overproduced and electronically distorted vocals of hip-hop singers like Fetty Wap and Travis Scott. Shimura’s husky, gravelly singing is a breath of fresh air in a room polluted by smoky substandard hip-hop. The feminist anthem “Lady Don’t Tek No” is another great example – a DJ Shadow produced Latyrx song that came too late for the first Latyrx album.

“She won’t speak less it’s somethin worth sayin
Don’t play, the girl take herself so serious-lay
People stare curious-lay
She got a natural way, her hips sway furious-lay
yet luxurious-lay
Carries herself like the cutest most purttiest thang
you’ve seen, this side of the Bay
Go about her business so purposeful-lay
She got razor sharp wit and she just won’t quit
Flauntin it, body built like a house made outta bricks
She got the smile, the style and finesse
And bounded with the blessed and profound intellect
Select few, have ever seen her butt naked
And they too wanna see the rep protected”

It’s FUNKY with a capital FUNK and the kind of hip-hop song that still makes the hair on my neck raise up in approval. If there’s one downside to “Greatest Hits!” though it’s that so much of this is retread of material on “Same !@#$ Different Day” – which is already one of my favorite Lyrics Born albums. The aforementioned Stereo MC’s remix, the Stuart Smalley inspired and Dan the Automator produced “I’m Just Raw,” the “Pack Up Remix” with Evidence and KRS-One, and Young Einstein’s take on “Do That There.” This is going to be a problem for me on a Lyrics Born compilation in general though since I’ve long been a subscriber to what he’s selling without Patreon, and truthfully some of the exclusions are just as painful. I love “Callin’ Out” to death but there wasn’t room for the remix with E-40 and Casual? What about the rare Muzappers EP track “Cloud 9” – no space on “Greatest Hits!” for it? Still I did say this album was an “Exclamation Point” on Born’s career and coincidentally that’s one of the Latyrx songs I’m glad was included here.

My takeaway on “Now Look What You’ve Done, Lyrics Born! Greatest Hits!” is that it couldn’t have possibly satisfied me at an hour long, but that doesn’t make it unenjoyable in any way. If this was your starting point on Mr. Shimura’s work you probably couldn’t ask for a better one save for “Different Day.”