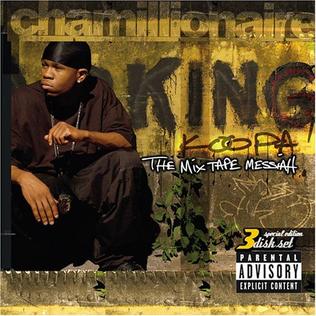 Now let’s not get it twisted. RapReviews has had love for Chamillionaire from the start, going back to the days he rapped with Paul Wall up to the present day where “King Koopa” has become a highly popular underground freestyle MC. Still I had to be a little concerned when I read Nin Chan’s review for “Greatest Hits” with these prophetic words: “At least Koopa doesn’t spend two discs indulging in his battle with Mike Jones this time – Mixtape Messiah anyone?” As much as I like Chamillionaire, I’m not sure I could listen to two whole discs of him dissing one MC, even one as repetitive and asinine as Mike Jones. And apparently the two-disc version was the first release. The copy of “Mix Tape Messiah” that I picked up is THREE discs long. Holy shit. The first disc is “The Album,” the second disc is “Screwed & Chopped” by O.G. Ron C, and the third disc is titled “Tippin Down.” I’m not sure how well planned a three-disc release was, because they don’t even have an inset tray to hold them all – just a flip-up for the first two and the third is left to slide around on top of the back cover. It’s easy to imagine crunching or scratching disc three entirely by accident.

Listening to “The Album” disc, the only conclusion one can come to is that Nin Chan was entirely correct. If one was wondering why Cham was mad enough at SwishaHouse to call his forthcoming major label album “The Sound of Revenge,” this should give you a good idea. When Cham mentions his name at all, he calls him “Dyke Jones.” Aside from thinly veiled homophobia that doesn’t get any cuter after he says it the thousandth time, it’s just not that good of a rhyme. Then to make matters worse he loads up “The Album” with skits about it that are varying degrees of unfunny. At the end of “Run You Out the Game” Cham pretends to be an ignorant cracker that shoots at anybody he even thinks is gay, “Dyke Jones” included. On the 98 second long “New Name Interlude” Chamillionaire seems to be editing or remaking a scene from a movie or TV show (possibly Roots) where a slave is whipped into submission, making him say his new name each time he strikes. That name of course is Mike Jones. When he’s not throwing disses in SwishaHouse’s direction, Chamillionaire is living up to his “Mix Tape” name by rapping over other people’s beats. Juvenile’s “Slow Motion” is the basis for “Put it in Slow Motion.” Lil’ Flip’s “Game Over” is the basis for “Who They Want.” Fat Joe’s “Lean Back” is the basis for “Body Rock”:

“Don’t do nothing foolish, cause I’ll completely loose it
Give a player a new breathin hole with a pool stick
I got hoes, square rooted, doubles and cubics
They be come in groups of two or more
And they be wantin to do it
Got females that do lick, and some that strictly do dick
And if your freaky prove it, I’ll go get the Cool Whip
If you love yourself so much, that you don’t want to prove it
You can get up outta here and you could get excluded
Don’t know what click that you with, I’m king of the new click
(What click?) Color Changin Click-clack rap, I plan to rule this”

Now as you might expect, disc two is just revised versions of what’s on disc one. It’s what you’d expect from a Screw & Chop mix, although despite what Chamillionaire has to say about him I’m still partial to Michael ‘5000’ Watts. The third “Tippin Down” disc is therefore what’s worth writing about here. It’s an interesting collection of tracks that are either by the Color Changin Click or which feature Chamillionaire as a guest, such as the “We on Fire” song which (you guessed it) is built off of Lloyd Banks’ song “On Fire.” This disc also reminds me of the lengthy debate I had by e-mail about Stat Quo’s song “Ooh Drama,” which many know better by the name “Call Some Hoes.” The original version of the song I heard only featured new Shady Records artist Stat rapping with Kanye West, but I received a lot of messages that stated the original song was actually Chamillionaire’s and they re-released it without him. To this day I can’t prove it either way since I heard both versions right around the same time and nobody ever proved either came first, but we do know that Cham has a reputation for rapping over other people’s shit. Still I can’t front and say I don’t like his verse on his version:

“Go get a bigger scale – on a scale of one to six
I’m an 11, you’re in heaven when I punish it
I got her naked but I know I wasn’t gonna hit
She was lookin at it like that isn’t gonna fit
I told her I was only gonna use half of it
If you want a smaller size go and rent a plastic dick
Why you actin like you a genital activist
Matter of fact you can get out, you can pack your shit
And she was like – ‘Ay, why you gotta act like this?’
Cus your wastin my time you can ask my wrist
Now you trying to talk to me about abstinance
She was like wait a second let me ask you this
Is you’re name Chamillionaire, do you rap? – No
Ain’t you on that song with Kanye West and Stat Quo?
Ron C says you was – Oh is that so?
And then I said if he did don’t know what he told you that fo'”

That’s the thing about Chamillionaire really. He’s a good freestyler and a funny cat when he wants to be, and can flip different verbal styles from tongue-twisting to assonance and alliterative rhymes that could hang with the best of ’em. The problem is that it’s getting a bit difficult to tell from all of his “mixtapes” if he can put the total package together. He’s good on other people’s beats, but sooner or later he has to come with his own or hook up with a producer who can provide dat. He also needs to get over this petty fight with SwishaHouse. If he really is bigger than anybody on their label, he should prove that by not even making references like “I don’t care who ‘House’ you in” time and time again throughout albums like this one. Whatever they did, get over it and move on. Keep on hustling. I’d recommend “Mix Tape Messiah” for hardcore Koopa fans, but if you’re not the jokes are gonna wear thin and three albums is a lot of shit to sort through for the gems. Most would be better off waiting for “The Sound of Revenge.”