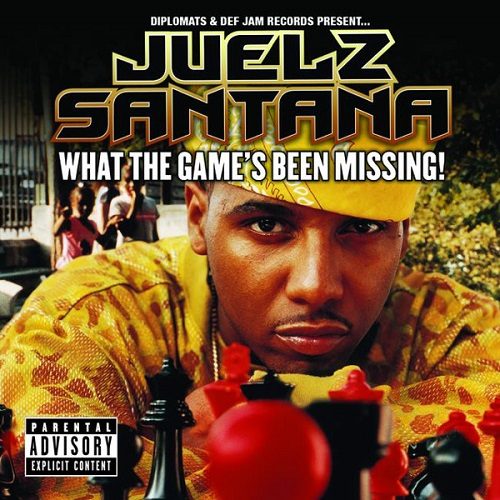 Juelz Santana :: What the Game’s Been Missing!

To be perfectly honest Juelz Santana would not have been my answer to the question “What is the game missing?” The first thing that comes to mind is dope MC’s in general. The second thing that comes to mind is beats that don’t sound recycled a million times or flatter than the tires of a junkyard car. The third thing that comes to mind is honesty and integrity – not saying shit you can’t back up and not trying to pass off “street cinema” as a poor cover for lying out your ass about how gangster you are. The list goes on and on. In fact Juelz Santana really isn’t on my list anywhere at all. Oddly enough he’s one of the few DipSet rappers that I have any respect for. His debut album “From Me to U” didn’t light the world on fire musically or lyrically, but it did show that out of the DipSet as a whole he had more potential than most of his banal brethren. It was easy to miss that potential with “There it Go (The Whistle Song)” though. The first single off of “What the Game’s Been Missing!,” the song was best known for a stupid hook where the rapper’s wolf whistle is repeatedly downsampled at a lower pitch. The actual lyrics go a little sum’n like this:

“Top down and I’m at it again
It’s hot now and I’m at it to win – you heard me!
Who want it with me, nobody wanna it with me
Oh I’m so fly, oh mami come and get me
Sit it down, back up, bring it on back up
Move it till you feel something hard on your back – huh!
There it go, if you want it come get it
I ain’t kiddin I’m wit it here it go – go
So, girl, let, me, see, you, get, low
There it go, yeah just like that
Move the thang like a boomerang and come right back
There it go – I don’t need to ask I proceed to grab
All chicks love my G’d up swagger”

And there I go – straight to the bathroom to throw up. Seriously though, I’ve heard worse, hell we all have. It’s sad that a 13 year-old Sir Mix-A-Lot song like “Baby Got Back” can wax Santana musically, lyrically, and in praising women’s ample posteriors, but there are far more inane songs playing on the radio. At least the drums produced by Daren Joseph and Terence Anderson thump pretty hard. Still for a guy once praised as being the future of the DipSet, you’d expect a little more than that. Thankfully you can find it in the Neo Da Matrix produced “Mic Check”:

“First – let me take time to brush my shoulders off
Wait… I had to dust my shoulders off
Thanks, y’all been waiting, been patient, been anxious
Now I herefore bring back me, your greatness (yes!)
The rap Ali, jab I weave
Then come back with the same jab times three
I blow smoke to the heaven I’m so close to perfection
Rap’s one big casino, I’m plottin _Ocean Eleven_ (ay!)
I might have sold the least
But I still managed to be most feared by most MC’s (good)
Who holding me, who close to me
Fo’ sho’ papi, nobody yeah that’s how it’s supposed to be
Now listen you can either comprehend it
or compliment it, it’s all authentic (yep!) But you better believe whatever I say
Guess what? You can bet it all, I meant it”

Now that’s the Santana rap fans are looking for – the one who’s a little bit clever with punchlines, who times his flow to go on and off beat purposefully, the one who has a brash personality and sounds like he could dominate the game given half a chance. The problem here is that there’s some game missing from “What the Game’s Been Missing!” Santana is a fifty-fifty rapper – half the time he comes with that fire and half the time his flame’s done been pissed out. Often the fault lies more with the beat and the guests than with Santana himself. “Oh Yes” is the ideal example – it’s hard to get behind a song built on samples from “Please Mr. Postman” – the Heatmakerz swing and miss. “Shottas” is less problematic musically, but as patois chattas go Sizzla is no Beenie Man or Capleton. Maybe the reggae/dancehall scene feels him, but if that’s the case he’s on the wrong song appealing to the wrong audience. Same goes for Lil Wayne and Young Jeezy on “Make it Work for You” – it’s not a natural collaboration and the Doe Boys beat feels out of step rhythmically and musically.

There’s enough Santana dopeness to improve upon his debut album at least marginally. “Whatever U Wanna Call It” featuring Hell Rell is that fire, and Shoddy comes nice with the pianoes in the background. It’s hard to go wrong when looping Eddie Kendricks, and “Lil’ Boy Fresh” does not dissapoint. Santana also works it into a nice coming of age story about doing wrong but trying to make it right all the same. “Good Times” shows the finesse Neo has as an up-and-coming producer, and even though the “back in the day” song has been done a million times you won’t be mad at Santana’s version. Other standout tracks include “Gone,” “Changes” featuring Razah, and the guitar rocking “I Am Crack.” It’s not a Fat Joe diss, don’t jump to conclusions. That’s one other good thing you can say about Santana – you don’t get the impression anywhere on the album he’s purposefully trying to start beefs with people to get more notoriety. I can still say Santana is the future of the DipSet but “The Game” has honestly not missed him that much yet. Maybe given four more years to develop lyrically and musically, he’ll become vital enough to actually be missed when not around.