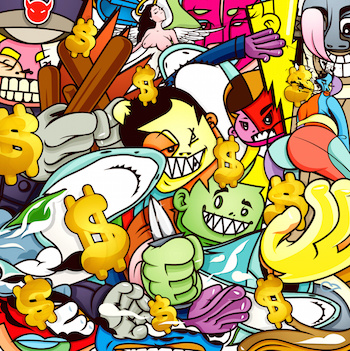 MarQ Spekt’s career spans decades. He started out as a battle rapper in Philadelphia in the 90s before being signed to Subverse Records in 2000. That label folded before he could release an album, but he did put out work with as part of the Broady Champs in 2005 and Invizzibl Men in 2008. In 2011 he put out “Machete Vision,” entirely produced by Kno of the Cunninglynguists. His latest album, “JustPlayWitIt,” is entirely produced by Blockhead, who has previously worked with Aesop Rock and Illogic. (For those not familiar with HiPNOTT Records, it is the label run by indie rap blog KevinNotthingham.com. It is an interesting state of affairs when blogs are running labels.)

Spekt’s battle rap roots are all over this album. It’s one big aural assault, with Spekt taking out anyone in his path, and especially other rappers. He comes out swinging on album opener “Vaughn Bode”:

You wouldn’t want to call Spekt a conscious rapper, but he does deserve credit for mixing in some genuine knowledge amongst his verbal beatdowns. A lot of “JustPlayWitIt” is boasting and smack-talking, but there are also some insightful rhymes. On “SumOfItsParts” he raps:

“Life has valleys and peaks
You can have vision without having to seek
Society’s an ulcer, ravage the streets
Bunch of parasites laughing they just happy to eat
Even first class can’t catch the elite
You’re just a slave with a master’s degree
Make your play it don’t matter to me
People live inside the belly unshackle the beast
He just vibing on the island of lost souls
Spirits in alignment all they’re finding his lost hope
We fight fire with more smoke
And leave your skull lying on the side of them crossbones”

MarQ Spekt’s aggression is balanced by Blockhead, who makes “JustPlayWitIt” the record it is. Blockhead has an ability to mix interesting and often melancholy music with hard-hitting beats. No matter if he’s sampling mourning pianos, or sitars, or lumbering upright bass, he always lays fat beats underneath it. Most importantly, Blockhead adds color to Spekt’s often monochrome delivery. Like Aesop Rock, Spekt is an intricate rapper with a flat delivery, which pairs excellently with Blockhead’s melodic beats.

I had a problem with Spekt’s rhymes, and it is the same problem I have with all battle rappers: Fourteen tracks of someone calling people names is a lot to take, especially when they use the second-person “you” so often. It’s hard not to take it personally when someone is saying they will destroy “you.” I don’t mean to come off as over-sensitive or whiney, but I don’t like being yelled at, especially when I’m listening to music. I was reminded of former battle rapper Nocando’s editorial in the L.A. Weekly from August, “Battle Rap: I’m Just Not That Into You.” “I do not want to be offended, nor do I want to offend others for sport,” Nocando wrote. He went on to say that if someone slept with his wife, a common battle rap taunt, “there would be serious repercussions: in her life, in your life, in my life, my kids’ lives and maybe more.” Spekt is good at tearing people apart, but I wish he’d use his impressive mic skills for less destructive purposes.
My issues with the whole genre of battle rap aside, this is a solid album of underground capital R Rap music. Like jeans and a white t-shirt, it may not be trendy but it is never out of style. If I’m going to sit through an hour of someone calling me a punk and detailing just how miserable they are going to make my life, I can’t think of a more enjoyable way to do it than “JustPlayWitIt.” MarQ Spekt is a fierce rapper, and he has found ideal partner in Blockhead. Together, they make doing bad sound good.