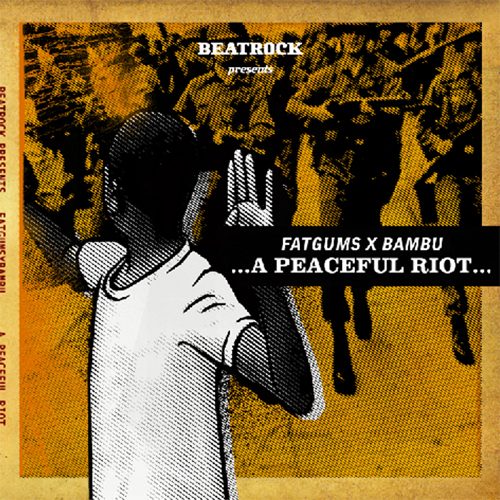 On this ten-song EP, Bay Area DJ Fatgums and L.A. rapper Bambu answer the question, how do you make hip hop that isn’t commercial, doesn’t pander to violence and misogyny, but isn’t boring? They start things off with “Peddlin’ Music,” in which Bambu raps about trying to make it as a rapper in L.A., dealing with open mics, angry bosses, shitty day jobs, and, for Fatgums, med school, “trying to stay focused when he opens that textbook.” “We peddle music on the side to hopefully make rent,” Bambu admits, but he doesn’t sound down. Part of that is due to the soulful strings and funky drums that Fatgums layers in the background. They may be broke, but they are still celebrating, and on “Good Clothes” Bambu raps about the joys of finding good clothes on sale.

On “Strapped,” Bambu takes on the subject of gun ownership. This is a tricky subject for rappers who get lumped in with the backpack or conscious scene. Talib Kweli got a mess of shit for his “Gun Music” from fans who felt that the underground should be a safe haven from the violence of mainstream rap. As Bambu makes it clear, the problem isn’t that simple. Over a Biggie Smalls sample and swaggering horns, Bambu raps about coming strapped both literally and lyrically:

“I do not condone the killing of our own
But I do condone defending yourself from the pigs, home
Ask Kaisha Miller who her killer was, you’ll see
Riverside PD shot til she did not breathe
12 shots hit her point blank right in her chest”

The Biggie sample is no accident, since the late rapper was shot to death. Bambu continues the discussion on “Gunslinger I,” describing his gun collection, but clarifying: “I am not advocating what a bullet might bring/I done lost two cousins three homies one uncle/From the little tiny pellets that fly out a gun muzzle.” Bambu grew up surrounded by gang culture, and was part of that life before decided to start focusing his energy on more positive pursuits. The song both acknowledges the need to bear arms, and laments the fact that so many people are quick to pull the trigger over nothing. “Remember,” he advises, “Fight for your family and change/Stop killing over nothing more than ‘What’d you say?'” That song is followed by “Gunslinger II.” Fatgums provides a mournful spaghetti western beat for Bambu to spit a tale of his 12-year-old nephew beaten by police. Fatgums cuts in just about every “fuck the police” line in hip hop history, ending with audio footage of Oscar Grant being shot by police on New Year’s Day.

Bambu’s thoughts on police and guns and violence are much more complicated and intelligent than what I’m used to hearing from the media, much less rappers. He comes from a world where pacifism isn’t an option, and where violence is as likely to come from the police as it is from the drug dealers and gang bangers. Bambu has a gritty toughness rounded in intelligence and insight, so he avoids the trap of coming off as either a dumb thug or an intellectual with no real life experience. He applies the same insight to relationships on “Listen,” which talks about the need for both partners in a relationship to listen to one another in order to avoid conflict and misunderstanding. The album ends with a eulogy to a dead friend, “Black Smile,” which includes phone messages to the deceased. Bambu’s rhymes are heartfelt and heartbreaking, and the song stands up with Ice Cube’s “Dead Homiez” or UGK’s “One Day.” Throughout every song on the album, Bambu’s never comes off as preachy, and he doesn’t drop any awkward or clunky rhymes. He never sacrifices the music for the message, and he manages to make his message sound good.

Bambu gets a lot of help from Fatgums, who is the perfect partner on this album. A point of reference would be 9th Wonder’s work with Murs and Little Brother; both producers know their soul, and are able to spin samples into colorful, banging beats. Fatgums created the beats here while on leave from med school, and as much as I hope that he will be able to finish school and become a doctor, I’d also like him to keep making beats. He’s too good on the decks to completely abandon them, even if it is to help people.

“A Peaceful Riot” finds common ground between feel-good, old school worshipping West Coast backpack rap and sun-and-gun drenched L.A. gangsta rap. Bambu tackles big issues without resorting to oversimplification or cliche, and Fatgums keeps it cooking with his soulful beats. This EP is one of the best I’ve heard this year, and I hope that the duo keep peddling their music.