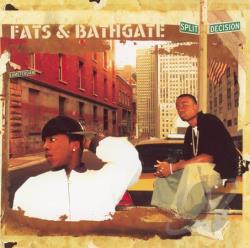 Fats and Bathgate both have a long and impressive history in the rap game, especially for two cats who have never dropped a full length. Bathgate was signed to Virgin a few years back and built heavy buzz with his hit single, “Bump That,” but was eventually dropped once Virgin gave up on its rap division. Fats was signed to Rodney Jerkins’ label, the producer that was on top of the game in the late 90s, but was too eventually dropped once Jerkins’ label venture fell apart. The two have been on the independent grind since then and now come out with their first official album, a collaborative effort that is meant to showcase both their talent and that of their new label, Never Enough Records. Fats and Bathgate both show that they can hold their own on the mic, dropping a mix of punch lines, street lyrics, and charisma. But ultimately, “Split Decision” is held back by poor production and played out song concepts.

The album starts out promising as Fats and Bathgate pay homage to their respective cities over a soulful beat from X-Ray. Bathgate comes especially correct, even finding space to reference the infamous Rich Porter story:

“In my city it’s whatever route, berettas out
Squeeze the four, Kevin Childs, they let him out
Yeah, cause he a force
Federals sat him down, and he ain’t talk
Stand around, stand your ground, now see the thoughts
Now see he walking, and that man’s living proof
It’s a cold earth, stones hurt, but we’ll shoot
In the city where the cameras never come
Where Jim Jones and Cam and them is from
Where Mase just left from
They stash fifty-eighths in they rectum
Home of the late, great Big L
And when you say weight, it’s big sales
And if you play safe, shit fails
Or you end up with B-I
Or sitting in a jump suit awaiting a V-I
Get a grand from hustling and think they T.I.
See I ain’t got any feelings
Make money, stay bummy like Kenny Wilson
For that gwop, then we fills them
We familiar with any villains
We get it in front of any building
Kidnapping many children
Kids clapping, and we willing
For the package that’s in the ceiling
Tempt me please, find a finger in a bag in Mickey D’s
With a note that simply reads â€“ 50 Gs
And I’m here to take it, I’m here to cake it
I got a new town and I’m here to make it”

From there things tend to be hit or miss, with mostly misses as Fats and Bathgate devote too much energy trying to make a club hit. “I Got That Workie” is a song mostly about the annoying “chirps” associated with nationwide Walkie-Talkie/Phone services. With “chirps” incorporated into the beat by Total Dynasty, the track is either extremely catchy or extremely annoying depending on how you feel. “I’m Watching You” is easily the album’s worst track as the clichÃ© and annoying hook doesn’t even rhyme:

“Now Go” is a better attempt at club music as the beat has plenty of bounce thanks to Frequency, though the subject matter and lyrics are still mired in the stereotypical. “Can’t U See” is a Fats solo track and finds him returning to the more soulful tracks where both he and Bathgate are more successful. Despite a solid beat from Do-It-All, Fats sticks to typical street brags and ends up making an average track. “Get It” finds X-Ray doing his best impersonation of vintage KLC from the No Limit days with little success. Fats and Bathgate also sound like they’re trying too hard to mimic a down south flow on the track. “Stand Up” solidifies the conclusion that Bathgate and Fats are best suited over soulful beats, especially those with some type of vocal sample. Agony provides a decent amount of energy in the beat with Freeway really getting things amped with his hook. Lyrically, Fats is O.K., with lines like “come yell at a player like Bobby Knight” and “It’s not toothpaste when I AIM.” Depending on what you like, the style is either dope or corny.

“So Silly” is another Frequency track which samples a smooth R&B joint with success. Fats and Bathgate spit rhymes dedicated to the “silly” females they’ve encountered and the things they say. “Hood Shit” is produced by Fats himself and seems to take a page from Bathgate’s own “Bump That” as the beat is playful and almost cartoonish. It’s a surprisingly successful track as the rappers contrast the playfulness in the music with raw street rhymes. “Drugs,” “Stop,” and “Let’s Ride” all follow a similar formula as the rest of the album, with decent beats coupled with average street rhymes and occasionally dope punch lines. “Stop” features Q45, Tom Gist, B. Grams, and Merlino along with Fats and Bathgate, but falls short of becoming a dope posse cut. “Missing U” switches things up completely with good results as the song has a smooth R&B feel with an equally smooth hook. Fats spits his most heartfelt rhymes dedicated to those who have passed away. “Pray” is another Fats solo track and is another highlight as he delivers what amounts to a last confession before death.

“Split Decision” delivers split results as some of the tracks are dope, but the majority of the tracks are at best average. Songs like “My City,” “Pray,” “Missing U,” and “Hood Shit” show plenty of promise for the duo as both a group and solo artists. But feeble crossover attempts abound and severely hamper any chance for success. With more focus on their own brand of music, Fats and Bathgate should find plenty of fans, but for now “Split Decision” doesn’t deliver enough quality songs to garner much attention.