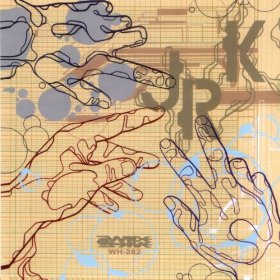 The Los Angeles-based instrumentalist JRK doesn’t like outsourcing his musical ideas. On his self-titled debut the only thing JRK doesn’t do is the vocal section. He plays his own drums, keyboard, and horns, which virtually makes him a one man band. It is a shame this band with two arms and two feet sticks to performing other people’s repertoires instead of creating his own sound.

JRK’s versatile musical qualities can be explained by taking a look at the record label responsible for his debut. Wide Hive Records was established in a San Fransisco community center, which acted as studio, bar, stage, and meeting point. Very convenient if you want to record a song, and let a live audience respond while they are sipping on a double espresso. Maybe the coercion is not so literal as described, but it does show why JRK, who himself is from San Fransisco, is so independent in his music making.

Like Wide Hive’s community center, “JRK” is filled with up-and coming MC’s and female singers. The veterans of Variable Unit and DJ Zeph are all signed to this West Coast underground label, but they apparently were all off duty while this album was in the making. MC Joe Con acts as lyrical punching bag for JRK’s jab combination beat on “Come One and All.” The song feels like it is mimicking Jurassic 5 tag team capabilities, but Joe Con is, at best, evenly skilled as the most moderate MC of the LA collective. Neal Rames’ rhyming skills on “Cold Chillin” are under average, with weak punchlines and an inadequate delivery:

“Never have I ever felt weak in the knees
Peep my daily routine, I’m not a weekend MC
Every day’s a Saturday when you’re speaking to me
On a stage, or always, keep freaking the beat”

Rames has an agreeable voice, but his words are not sharp enough to make a rip in a piece of paper. “Follow” and “One Long Kiss,” lastly, feature female vocalist Jessica Coke, who sounds like a clone of former Portishead singer Roisin Murphy. She has an endearing voice, but never comes close to Roisin’s sexy timbre.

The guest appearances aren’t too impressive, but a well-equipped beat coach doesn’t have to break a sweat to save the day, as J. Dilla proved time after time. Unfortunately, JRK is still unfit to save the day. His songs in themselves are very enjoyable background tunes, but they might as well be featured on one of those vintage music box sets you can buy at the record store around the corner. In other words: they lack impact.

“Purple As an Iris” might as well be the lead song for the next Austin Powers feature. It has easy listening written all over it with its lighthearted electro tunes and silly drum loops. “One Long Kiss” is souped up elevator music with swooning female vocals poured all over it, like butterscotch over vanilla ice cream. With its slick cha-cha-cha rhythm and hypnotic female humming, “Synthetic” made my foot tap the ground for around fifteen seconds, but after those fifteen seconds that foot got stationary, and my mind wandered off to more important matters.

Individually, JRK’s compositions are certainly enjoyable. His musical craftsmanship is apparent, and the variety of musical instruments is surprising to say the least. It is a shame the San Fransisco Wide Hive talent doesn’t use those skills to come up with new formulas. Quantic and The Herbaliser have previously explored the musical directions JRK is rediscovering. Both these acts have constructed a sound their fans can easily recognize, while this debut completely lacks that trait of instant recognition. When you are a talented musician like this one man band, forgettable is not the word you want to hear, but JRK will have to step his game up to get people to notice him.