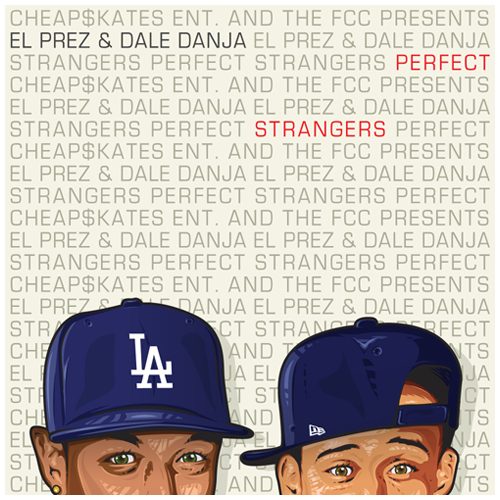 Every time I travel, I take advantage of the idle hours by going back and listening to a handful of the up-and-coming rappers being pushed by the blogs and hip hop sites I read regularly. The underground hip hop scene is as fertile as it’s ever been; the XXL Freshmen Ten, Drake, Wiz Khalifa, Guilty Simpson, The Cool Kids, Pacific Division, J. Cole and a number of others making better music than almost anyone, be it through mixtapes, EPs or albums. It’s difficult to filter the good music from the hype when so much music is being pushed by sites like 2dopeboyz, Nahright and Pigeons&Planes, among others.

I’d heard of El Prez for a minute, mostly via 2dopeboyz and then as he was Hip Hop Official’s artist of the week in January, around the same time he dropped “Perfect Strangers,” a collaborative mixtape with fellow Los Angeles MC (and producer) Dale Danja. Better six months late than never, I suppose.

With the tedious exposition out of the way, from what I’ve heard â€” between “Perfect Strangers” and a briefer listen of “The Daily Show” EP â€” El Prez is a very listenable rapper, if less talented or at least less refined than the aforementioned musicians. He’s not a gangster rapper nor is he a hipster (it seems every new rapper is bound to be pigeon-holed into one of these categories), and I suppose if I were forced to compare his subject matter and delivery to another emcee, I’d call him a West Coast Wiz Khalifa, without the leitmotif of marijuana throughout his work.

Now I feel like a bastard for practically blackballing the other half of the duo, Dale Danja, in this review. I haven’t heard nearly as much buzz in his favor, but from what I can deduce he’s a nearly as skilled a rapper as El Prez with the perk of producing nearly half the tape as well. And while neither of the MCs is terribly compelling on their own, their conflicting styles make much of the music more than the sum of its parts. Danja has a smooth, low voiced flow that could easily be mistaken for that of a Texan, whereas El Prez has a higher voice and less predictable delivery.

All that being said, I can’t say “Perfect Strangers” is a great mixtape, or even a perfectly good piece of work. It’s almost completely listenable, and at times impressive, but as a whole lacks direction and polish. For one, it seems to rely a bit too much on mixing other artists’ music into a hip hop beat, likely hoping to tweak the songs enough to bring out their best attributes while still sounding fresh. Good in theory, but it’s not completely successful here. “Let Go” mimics the guitar line of the White Stripes “Seven Nation Army,” occasionally concealing it under some Bay Area-flavored bass. Smart idea, except Apathy did the same thing in 2004, and his less tampered with sample sounded a lot better than Danja’s ambitious mix. Similarly, Chex & Cristo remix MC Hammer’s “U Can’t Touch This” and “Them Nights” samples Lauryn Hill’s crooning on “Doo Wop,” both to mixed and ultimately too derivative results. When Danja and co. are creating their beats from scratch (or at least not from smash hits), things go much more smoothly. Axl’s “Whatchu Got” sounds like classic Pharrell at its bestâ€”and I can’t stress “classic” more, as I’m not referring to the Pharrell that’s been recreating the same beat for the last few years now.

Rapping across the board is solid, if rarely flat out impressive. El Prez is at his best when experimenting with rhyme scheme and wordplay, at times delivering humorous punchlines such as, “dirty bitches wanna put they hands on me // â€˜til I’m lookin’ like the front of the Mann’s Chinese.” Danja is consistent and sounds comfortable on both self-produced beats and outside contributions. Guest spots are limited outside of the bonus tracksâ€””Floss Angeles” and a remix of the title trackâ€”both of which are posse cuts good enough not to bitch about the stupidity of bonus tracks. However, the best verse on the tape is perhaps Tunji’s on “Them Nights.” The California MC, who I’d only heard prior in his collaborations with CunninLynguists producer Kno, display an impressive balance between Prez’s rhyme scheme and Danja’s confident flow, and is perhaps the next rapper to join me on a road trip. El Prez is still coming into his own both lyrically and musically, and while I won’t tell you to hurry out and pick up “Perfect Strangers,” it’s solid music for the whip and, not to mention, completely free.