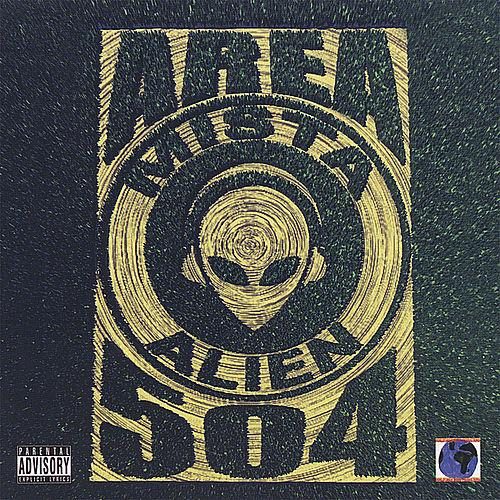 With a logo depicting the bust of a Martian and an album titled “Area 504,” you’d figure that New Orleans emcee Mista Alien was on some interstellar shit. “Is humankind being used as part of some cosmic science project?” a man inquires in the album’s opening seconds, immediately captivating all Gang Starr/Star Trek fanboys in listening range. As it turns out, watching the Discovery Channel and researching life on Mars are probably the last two things on Alien’s agenda.

In fact, a sense of false advertisement might be my biggest beef with “Area 504.” The nerdy motifs and obscure, sampled interludes almost pigeonhole Mista Alien before the beat drops, but the underground pool they look to be wallowing in is far from where they actually are. Quite the contrary, his style is much more 8 Ball than Vinnie Paz. Ultimately, “Mista Alien” was flat out a poor choice for a name, as his music has absolutely nothing to do with black holes, gas giants, or any of the reasons why Pluto isn’t a planet anymore (are there any?).

Front to back, “Area 504” swells with marginal southern rap. It isn’t bad by any means, but it does manage to find itself handcuffed to every southern stereotype imaginable (one of the track’s subtitles is even “Ridin’ Dirty”). Nearly every song revolves around interchangeable dirty south cliche; postin’ up, puttin’ it down, talkin’ shit, keepin’ it dirty, hittin’ the spot; it’s hardly a stretch saying that nothing of any significance is ever said.

The beauty of this is that it almost doesn’t matter (*emphasizes “almost”*). Just as Three Six Mafia could captivate the world with a song about weed and the state of Tennessee, Mista Alien proves that good chemistry and the ability to flow over a beat gets you farther than one might imagine. It comes as little surprise then, that in listening, I was constantly reminded of the original music featured in the movie “Hustle ‘n’ Flow.” In the film, Terence Howard’s character is an incredibly shitty lyricist, but lo and behold “It’s Hard Out Here For A Pimp” did end up winning an Academy Award. For the majority of the album Mista Alien finds himself clinging to norms, coming off hokey and lame even when he tries to flip something serious, but in the end he wins in a war of style vs. substance.

Beats are more than half the battle. Worldtaker shows a savvy for concocting ruthless southern jams, but his samples and melodies are rarely up to par with his craft. Still, his beats are very listenable: “How We Run Shit” rocks a throbbing classical loop, and “The Crescent” is like a throwback straight from No Limit’s heyday. It’s unfortunate that Worldtaker flips hardly a sample on “Area 504,” as his loops are decidedly better than his original melodies. Meanwhile, the cutting of vocals into hooks are extremely hit-or-miss; some cleverly scratched into the beat, some completely out of place and utterly ridiculous (“red dragons can’t even fuck with my brain pattern” on “Mental State”). As a team, Mista Alien and producer Worldtaker have good chemistry, but the most impressive thing about “Area 504” is how cohesive it is. Even with the seemingly out-of-place sci-fi skits, it’s extremely free flowing, and with the duo’s seamless ability to coexist, it’s an easy listen. Rock this when E.T. shows up in your backyard.