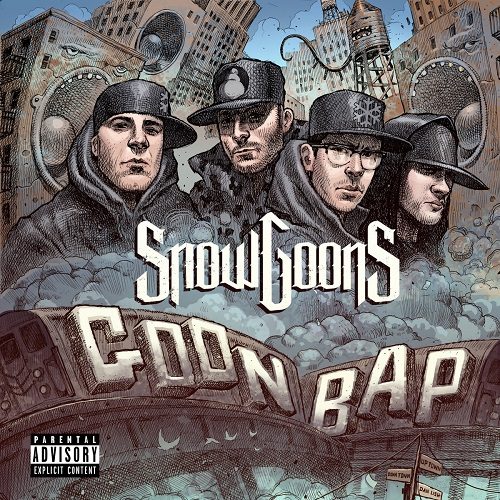 Attempting to keep up with the Snowgoons release pace for exactly ten years, this website has always shown sympathy towards what the outfit now can rightfully brand as “Goon Bap.” Our debut coverage of “German Lugers,” however, closed with the wise words that “everyone that has been waiting for this will know that this release could soar to greater heights given a real definitive direction and an even stronger use of the stable at the disposal of the ‘Goons. The true heads will have to wait for that piece of perfection on wax and just be entertained with what they get, a very nice album.” As the years went by and the albums hit underground heads left and right, that perception was never fundamentally challenged. Yours truly unwittingly repeated it a couple of years ago, on the occasion of the quasi-compilation “Independent Warriors“: “Somewhere down the road there has to be that one outstanding release. And if it happens to be their definitive retrospective, the song selection has to be stronger than on this 2015 snapshot.”

Barely a month after that statement the ‘Goons dropped the double-disc “The Best of Snowgoons” on that ass. The occasion to judge the team by its own standards (what they consider their best work) came and went, and of course by the end of 2016 the quartet already had the next project ready. “Goon Bap” would be a suitable title for a culmination of the Snowgoonian career. Let’s consider the kind of opportunities they create. They are able to revive the Flatlinerz, a group that put out a sole album in 1994 but still manages to get regularly referenced when the hip-hop subgenre horrorcore is mentioned. They take Artifacts back to their heydays as a graffiti-checking, technique-flexing tag team. They get all three Dilated Peoples on a track, a feat outside of the group’s albums. All three respective tunes do justice to their features. Although neither one has the power of the album’s closer, a farewell from the incomparable Pumpkinhead, who parts from his fans and aspiring rappers with “a seminar for the youth that love hip-hop.” The touching “My Advice” is the sort of album finale deserving of a steady accumulation of quality tunes that precede it.

They exist. The excellent production for Doppelgangaz’ “Steady Cloakin” matches the duo’s own musical ambitions beyond any stereotypical hardcore hip-hop. Artifacts come hard over the heroic horns and sharp scratches of “All City Kingz.” The Flatlinerz’ “Give Me Room” is a true-to-the-times throwback to the pocket they represent both musically and lyrically. Passionate MC may sport a cute ’80s rap name, but dude is a beast in the booth and sure to be a Snowgoons fan favorite. Over an accelerated rock-meets-classical-meets-rap concoction (truly a vintage Snowgoons production) he appoints himself “Cypher God” all by himself, backing it up with an aggressive flow and dense verbiage. “Freedom” is Sicknature’s most personal moment on the album when he, accompanied by Block McCloud and Snak The Ripper, reminisces on the role (rap) music played in his life:

“Before the Snowgoons fort was built, before a bit of luck was revealed
before gettin’ props in the field for my productions with Bill
before tour offers from promoters, performances and posters
before tourin’ with La Coka, before the various travels
before my work with Paz and the Pharaohs
I only had frustrations that I didn’t manage to channel
A rascal who looked for ways to escape from the lunacy
Would await opportunity, but impatiently usually
Too young and troubled, an obvious menace
I invited problems so I had a fuck-off grimace
Society’s expectations left more room for insanity
Life was never met with horse shoes or rabbit feet
But then my brother bumped a tape with Run-D.M.C.
My thoughts would gain speed, my tongue became free
Bought a Public Enemy record and instantly wrote a rap
Felt it would take a whole nation of millions to hold me back”

The Snowgoons vocalist harbors these sentiments for duets with Reef the Lost Cauze (“Goon Bap”) and Sean Strange (“We Won’t Die”). “Goon Bap” relaunches the Snowgoons to the forefront of ’90s nostalgia. The choir that they preach to will surely join them in their sermon. It will also welcome the cast of “The 90’s Are Back” with open arms, a class reunion that seems to ignore that most of these MC’s try to have a career in the here and now. As does the offspring of their peers (Chris Rivers, iNTeLL), who admittedly still finds Snowgoons beats to be a natural habitat.

And so the Snowgoons’ latest star-studded album goes the way of its predecessors, an apparently indispensable ingredient being lengthy lineups and more or less unlikely bedfellowships. Modern incarnations of hip-hop’s old soul like Doppelgangaz or Epidemic are recognized and rewarded with guest spots, rap commons like Sean Strange and Aspects get a slightly disproportionate amount of exposure, all the while that new talent is fostered (“New Kidz on the Blok” featuring Token, TJ Brown, Big Kurt, iNTeLL and Merkules). It’s one big hip-hop kumbaya, even though its participants are not particularly happy campers, but still coming from the heart and caring about the art.

A formula once born out of necessity has evolved into a formula for success for the Snowgoons, and from their point of view it’s totally understandable that they stick to it. There have been infinitely more instable projects in rap music than theirs. DJ Illegal, Det Gunner, Sicknature, and J.S. Kuster know what they’re doing, in every respect, although occasionally they are too hospitable hosts, see the “Hell on Earth” drum set used in Infamous Mobb’s “It’s a Queens Thing” or the sheer amount of rah-rah tracks that naturally attract the likes of Sticky Fingaz, Slaine, Lil Fame, Chino XL or Ill Bill. The same could be said for the modern slow-paced “Solid Gold Guns” featuring Conway and Banish (among others), but if the ‘Goons have to be lauded for anything this time around it’s their musical range and especially their ear for melodies. The latter is frankly excellent, providing first-time listeners with an element of attraction in case the rhythm section and the raps are too forceful.

So how about ‘that piece of perfection,’ ‘that one outstanding release’ from the Snowgoons? First off, we have to realize that producers practically never have to burden that specific responsibility (unless it’s instrumental releases). The rappers have to deliver the masterpieces, and the beat selection is usually their success (or failure). Therefore producers aren’t deemed chiefly responsible for classic rap albums, unless they mastermind concept albums or are part of a hall-of-fame group (or are named Dr. Dre). The Snowgoons are in another business, one they helped build substantially. Regardless of whether they ever present us with a neatly wrapped up crowning achievement of their career or not, ten years after “German Lugers” their track record speaks for itself and it speaks loudly.