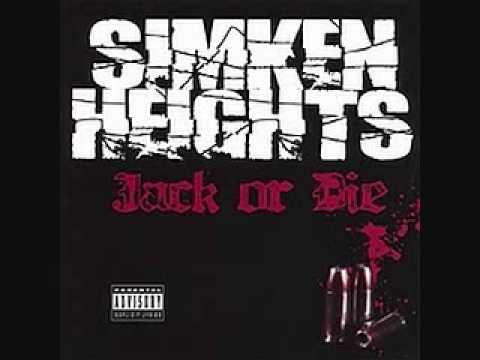 Simken Heights have been around since the mid-90s. The Michigan-based group was originally Cap One, his brother J-Rome, and Mass. J-Rome was murdered, and there are rumors Mass found religion. I’m not entirely sure who makes up Simken Heights on “Jack or Die” because there are no production credits or liner notes on this disc. The only emcees I heard referenced were Zilla and Cap One. Their earlier stuff was mostly horrorcore, referencing the kind of satanic imagery that is more common in heavy metal than hip-hop. On “Jack or Die”, they are focused on a different kind of devil: The gun-toting, drug-dealing, homicidal gangbanger.

On the first track, “We Ain’t Playing,” Zilla lays out Simken Heights mission statement in a syrupy drawl:

“We be ready for combat
We be ready for gunplay
We wet your blocks up
With Berettas and AKs
If you want to try, bitch
Then you gonna die, bitch
I roll with Smokebox
We ready to ride, bitch
Your neighborhood dopeman
I’m pushing amphetamine
You niggas be hating
But I be serving up your fiends”

Their crime spree is continued on the title track:

It’s not all jacking and shooting, however. They also liked to get wasted. On “Thizzin” they declare “We smoke we drink we pop we roll/ We get fucked up til we can’t no more.” This sums up their take on life: They want to fuck shit up, get fucked up, and fuck, in that order. They have an efficient, no-frills flow, as if rapping was only a side-hobby to their illegal activities. That approach has made Rick Ross a pile of paper, but I wasn’t really feeling the blunt, coldly efficient flow that is all over this disc.

The music matches the sinister mood of the lyrics, with a lot of menacing synths and strings, skittering hi-hats, and handclap beats. As with the rhyming, the beats are competently constructed but not overly exciting or interesting. They get the job done, but that’s about it. Highlights for me include the bizarre pitch-shifting beat on “I Need Mine” and the spooky, horror-movie soundtrack of “Soldiers”.

Simken Heights’ unrelenting, unapologetic nihilism is probably their biggest strength. â€œJack or Dieâ€ is 100% hardcore and 100% evil without even the slightest attempt to be at all socially redeeming. It probably would have just come off as phony and hypocritical if they had included the obligatory track about how hard it is to grow up in the hood. The flipside of this is that for those like myself who are not huge fans of horrorcore or hardcore gangsta rap, the nonstop ultraviolence on this album is repetitive, numbing and not very interesting. I’ve always needed at least some glimmer of social consciousness to make gangsta rap palatable, and there is none of that to be found here. Instead, it’s ten solid tracks of bleakness. Simken Heights do what they do with some skill and finesse, and fans of Esham and the like may find this highly entertaining. I’m not a fan of the genre, and â€œJack or Dieâ€ didn’t win me over.