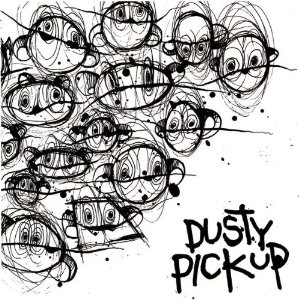 “Dusty Pickup” has all the makings of a classic album. Symmetry, the emcee and star of the LP, is a truly gifted master of ceremonies. With an excellent rapping voice, he comes from the same school of versatile, multi-syllable emcees like Phonte and Blueprint – he weaves in and out of a beat like it’s nothing, rattling thoughts off like he’s firing from the waist. Producer Dox is equally skilled – sampling from a myriad of soul and jazz, he provides an ideal sonic landscape for his emcee to work with.

The canvas is there, but that doesn’t mean there aren’t obstacles. While Symmetry has great things to say, he can’t help but get caught up in a little bullshit. The same, tired “are you listening” complaint that Little Brother drilled into our skull years ago becomes prevalent early on, and at times he completely neglects sticking to the theme of a song. The “I’m not your typical rapper” shtick is exhausted by track 8, further complimented by several of his long-winded complaints on how everyone’s “fucking with him.” And that’s even before the “fake versus real” commentary… ugh. When he finds himself, however, Symmetry really turns it on, putting his amazing thought process on display.

Symmetry kicks it to a provocative chick on “I Need You” (“I ain’t fond of women I can figure out”), and “Little Girl” is an utterly haunting tale of parental neglect. And even though he’s hating on “Hater” himself, it’s an interesting rant. Elsewhere “She Asked” sloppily evolves from a series of some chick’s questions, to Symmetry’s idea of heaven, to the recurring theme that he has no definition as an emcee. “Idiosyncratic” almost stumbles with its wacky, Gnarls Barkley-esque hook, and Symmetry doesn’t do much to make up for it, going on about how he continues to think out of the box and this and that.

But even when Symmetry fails, Dox regularly kills it with the beats, sounding something like former Rocafella/Camp Lo house producer Ski earlier in the album but evolving into an ever-versatile beat smith by the end. The familiar Skull Snaps break used on Gang Starr’s “Take it Personal” is used for “Back There,” and gorgeous voices and warm, ambient bass tones accommodate the appropriately titled “Angel Eyes,” enveloping Symmetry’s wistful reminisces. “Intrepid Approach” builds off a beautiful series of keys and chimes, and is arguably the best beat on an album full of heaters.

Dox’s tight, old school-sounding production harkens back to early 90’s Native Tongues, and compliments Symmetry very well. They sound good together naturally, so it only helps that the overall sound is extremely professional, especially for a pair of relatively unknown artists. Symmetry boasts extreme dexterity and a roaming imagination, and when concepts get derailed, the listener has beats to fall back on. More often than not, it’s a win-win situation.