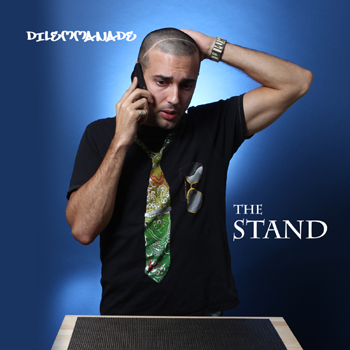 If life gives you dilemmas, make Dilemmanade. If that doesn’t make particularly sense to you, it makes perfect sense to the artist formerly known as Johnny Dilemma, who after having to undergo emergency brain surgery five years ago when he was still a teen decided to turn the negatives into something positive and goes by Dilemmanade now. Continuing the penchant for wordplay ostensibly at work here, with his November ’13 EP, recorded for the purpose of providing the Canadian with new material for his supporting slots on Machine Gun Kelly’s tour, he doesn’t just open a stand, he also takes one. Even though it is more of a personal stand, it might prove inspirational for others, just to witness someone tackle life with a newfound enthusiasm after being given a second chance.

Mind you, Dilemmanade doesn’t run down his medical records in a maudlin tone, far from it. The only time he gets actually serious is in “You Mang!” – and that’s a song that features some of our genre’s main ingredients as the rapper testifies a strong sense of independence and calls to the stand longtime rap music confidant Tony Montana. From the jump, Dilemmanade comes off as an artist who’d rather thrive on invincibility than vulnerability. The 7-cut EP opens with “World on a String,” whose Sinatra sample leads into a firecracker of a track erupting with piercing horn stabs and guitar riffs. As producer Justin Frew prolongs Sinatra’s stay, Dilemmanade dives head first into tongue-in-cheek triumphant bravado:

“Feelin’ like a king, you should call me Tut
So if you’re feelin’ like a queen, you should call me up
This is feelin’ like a dream – but it always does
Hell, Buddha couldn’t even keep me calm enough
I’m always pumped, up, high on life
Like, ‘Today’s the day, tonight’s the night’
I call it love, you should try it twice
Got the world on a string and I tie it tight
Like a yo-yo, y’all, no cello player, I’m like ‘Yo-Yo Ma
Hello there, here’s my phone to call’
[…]
Got the globe in palm, ’bout to go stroke-arm
So I can f… the world, here – hold my balls
I’m on the come-up, CD comes with a rolled up cloth
So when you touch yourself to this you won’t get caught”

What’s instantly striking about Dilemmanade is how articulate he is on every level. An extensive live show resume may have something to do with it, and for the most part “The Stand” offers the type of energetic and engaging tunes that should serve him well live. “Ms. Weekend” is a fun tune that combines a catchy metaphor with a punchy Andrew Triple A production. “Ducks in a Row” looks to the south for inspiration with a hypnotic beat courtesy of Good Lawd Lashad and a more aggressive delivery. “Dubya” tracks the Toronto native’s move to Vancouver, throwing up a universal ‘W’ and paying homage to West Coast rap with a heavy piano bounce and chipmunked funk vocals. “Inhale Exhale” is smoke-filled as expected, but also meets the expectations for modern spaced out and trippy hip-hop, again thanks to a clear and precise beat (this time from Stroker DeLuca) and an equally spot-on performance by the rapper.

For a while it was common for rappers to record 18 variations of the same song and sell them as albums. The times have changed. Rap releases have not only become shorter (the EP being a popular format especially for indies), they’ve become simultaneously more eclectic. Dilemmanade is part of that new generation, plus his personal inclinations, influences and temper paint him as an artist who likes to come from different angles (that includes taking on different accents). Like other disciples of Eminem he’s on his way to discover his artistic essence. At times he seems to resort to some kind of niche as a North West representative (with the KimYe punchlines to go along), but the song material, the sound variety and last but not least the personal story suggest that like with other regional artists there’s a greater audience waiting for him.