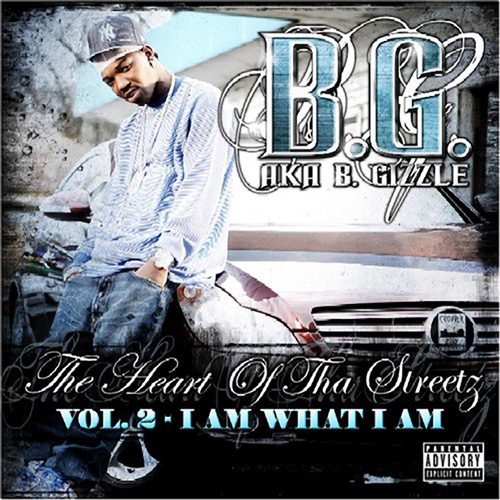 To put this album in context is easy to do. With “The Heart of Tha Streetz Vol. 2”, B.G. hopes to ride the second crest of the Southern rap wave. He was already there the first time around, and now he wants back in the action. Since he’s been beefing with Lil’ Wayne and Baby, Ca$h Money does not have his back and B.G. has found it difficult to come through with the hits like he used to. Still, he’s been grinding on Koch records and keeping his name out there, refusing to go away and still netting a few higher profile guest spots per album (T.I., Paul Wall, etc.). Add his continued perseverance to the fact that B.G. sounds VERY much like Lil’ Wayne and the notion presents itself: while the rap world is currently eating out of Weezy’s hand, how ’bout a little action for B.Gizzle?

Continuing to make albums has been good for B.G. because they have helped him improve his flow. Lil’ Wayne came back for the Carter albums with new fire, newly creative lyrics that catapulted him past Ca$h Money’s most debilitating quality: none of the original MC’s could rhyme at all. Has B.G., the near dead-ringer for Wayne’s style, graduated to the same lyrical plane?

Oh, hell no. Weezy is still a much more captivating rapper, and even if he does pose too much, at least he’s capable of writing in character semi-convincingly. B.G., however, has gotten better but doesn’t pepper his street-edged rhymes with enough wit to stop himself from being annoying. He’s got the lazy, saran-wrapped/rapped syllable stretch working to full effect, but even his sticky New Orleans style can’t cover up some pretty uninspired lines. Still, he’s not bad. His flow is mostly on point, his voice itself was made for rapping, and he’s certainly a cut above Dem Franchize Boyz and all that bullshit.

So, if you’re like me and kind of feel bad that B.G. was kicked out of the limelight, you’re looking for a foothold for this guy, a way back in the game, a Trojan horse. Just because the public is feeling Weezy doesn’t mean they’ll feel B.G., and really, the MC’s are miles apart in terms of the kinds of chances they are willing to take; Wayne is a much shrewder businessman. But B.G. has an ace up his sleeve, and that ace is guest shot from his old homey Mannie Fresh.

In this day and age where one well-marketed single can a platinum album make (Ne-Yo, case in point), you gotta be hot with that first taste. An artist must introduce or re-introduce him or herself to the rap audience with a song strong enough to sell a whole album. Mannie Fresh plays by those rules because he can, and he does B.G. one hell of a favor with “Move Around.” Already on the BET charts right next to Weezy’s “Ghetto Music” is another Hot Boy, and it’s really nice to know B.G. “never ever forgot/ Mannie Fresh was the reason why I was so hot.” This cut will have everybody singing, “I’m from the ghetto, homey/ I was raised on bread and baloney!” It’s funny/serious and it’s just the energy B.G. needs right now.

So how’s the rest of the album? Well, it’s alright. B.G. sounds as if, with every release, he’s a little more wise for his mistakes. He sounds more like a rational man and less like an arrogant kid than he did in his Ca$h Money days. He offers a little more insight into how a gangsta lives and how a gangsta makes paper, but it’s pretty much gangsta all around. About half the beats are bad. A few are horrible. The Paul Wall cut is on point, but doesn’t re-invent the wheel. He has a few pop hopefuls that I hope don’t pan out because they sound like Murder Inc. one-offs, but there are a few cuts that are dirty, grimy, and completely sold by B.G.’s flow. If he gets a hot beat, especially a dark sounding one, he usually kills it. That happens a few times.

Still, the main reason to care about this disc is “Move Around”, a monster of a song that, on this album, is surrounded by half-cocked reminders that B.G. can still rap just fine and he ain’t goin’ nowhere. The extra swagger in Weezy’s step came from his actually believing himself to be an artist. He went to art school, did or did not graduate, and decided that he had a mind, had something to say, and had some talent to do it. He challenged himself to raise the bar. That’s what B.G. needs to do.

Despite coining “bling-bling” and storming the nation with Ca$h Money, B.G. knows he can’t rest on his laurels and wait for fame to come to him. Continuing to make albums is the right thing to do, but he needs to create as many combinations as possible, because if it weren’t for Mannie Fresh, this effort would be a whole lot less hot.