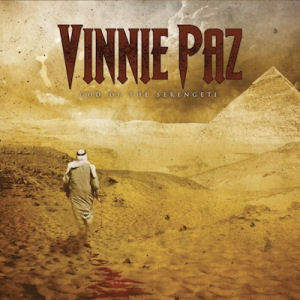 Vinnie Paz :: God of the Serengeti

“God of the Serengeti” is the second solo album from Vinnie Paz, a follow-up to the well received “Season of the Assassin” in 2010. It’s not surprising that it would be critically acclaimed given his long history as the frontman of Jedi Mind Tricks, and they dropped an equally acclaimed album between these two. At this point in Pazienza’s career, the only thing he should fear is not fear itself, it’s simply finding a way to stay near the apex of underground hip-hop after having been there for so damn long. “God of the Serengeti” doesn’t pull any punches in that respect by having DJ Premier produce “The Oracle,” one of the most bruising beats from Primo in many a minute. It’s bass, distortion, reverberating guitars, slapboxing beats and Biggie samples – SHIT HITS HARD.

“I’m a bull in a china shop, watch how the uzi spit
Who he wit, brothers with +Hammers+ and they like +2 Legit+
I ain’t got any time for your foolishness
Raw raps from the same place where the kufi sits
He the motherfucker always sippin Goose and shit
Stomp a rapper out, Timberland boots and shit
The left hand is what I give you the contusions with
The right hand is where I write all of the ruthless shit”

Vinnie’s unbridled ambition is on display when he spits the words “I’m trying to make the same money that Madonna make.” I don’t know if that’s realistically possible for Vinnie Pazienza, but if you don’t aim high, you’ll never hit anything but the concrete. Actually I don’t know if that’s obtainable forANY underground rapper, since having Madonna money would contradict being “underground” in the first place, but let’s examine this idea a little more closely.

Paz has a devoted following, but he’s more than a bit of an anomaly, and not just in hip-hop. There aren’t many people who are born Roman Catholic in Sicily and convert to Shia Islam in Southern Philly. As much as I respect his religious choices, I’m still not sure how he reconciles the amount he raps about drinking vodka and swearing profusely – perfectly acceptable for a rapper but not exactly in keeping with his faith. As a listener you come to accept those contradictions though, along with his many conspiracy theories about everything from George Bush and Barack Obama to the Illuminati. If these things don’t keep him from selling like Madonna, his vocal tone is (and this is a compliment) like someone gargling with 190 proof after smoking a dozen cigars.

There are a lot of reasons Vinnie Paz could never get that kind of mainstream that Madonna does, though if we’re balancing the scales that’s also because Vinnie Paz wouldn’t be the amorphous musical blob she has become over the years. To stay on top of the pop world you have to change with every fickle pop trend, work with every hot flavor of the minute, and basically lose your soul to the music industry. Vinnie Paz may only be on top of the underground, making Mobb Deep money instead of Madonna money, but he gets to stay true to his values – even the contradictory ones – and make the kind of music his fans embrace. And what’s so appealing about Vinnie Paz IS the contradictions – the sandpaper voice, the Muslim who drinks straight vodka, the man who casually advocates that “Violence Begets Violence” yet says “As-salamu alaykum.”

Paz is working with all the people you’d want him to work with from hardcore East coast hip-hop on this project. Lyrically he’s got Immortal Technique and Poison Pen on “And Your Blood Will Blot Out the Sun” (that’s a hell of a title), Mobb Deep on “Duel to the Death,” Kool G. Rap on “Wolves Amonst the Sheep,” Tragedy Khadafi on “7 Fires of Prophecy,” et cetera – there’s no shortage of cameos amongst the 74 minutes of this CD including multiple cameos by his favorite collabo’ partner Block McCloud. Beats are from the finest producers of the hip-hop scene as well – Marco Polo, Mr. Green, Stu Bangas, Psycho Les, et cetera. The only ones who didn’t bless this album that probably should have are Alchemist, M-Phazes and Large Professor.

So here’s the grand summary – a lot of people don’t like Vinnie Paz and I understand why. They don’t like the contradictions between his religion and the lifestyle he advocates. They don’t like the vocals and they find his voice irritating. They don’t like the seemingly limitless amounts of bloodshed he’s willing to spill. Vinnie Pazienza is not going to be Madonna to those people, now or ever. Guess what though? Nobody said you couldn’t be a contradiction and be a success. Kanye West has built an entire career off it. Maybe it’s not Jesus who walks with Paz, but if he considers him a prophet, more power to him. All he really has to do is keep on making the kind of music he does on “God of the Serengeti” and give it the one thing he’s never had any shortage of in his career – TONS OF TESTOSTERONE AND FUCK YOU ATTITUDE – and there will always be a place for him at the banquet hall of hip-hop’s smorgasboard. He’s an unusual flavor, but one that should still be considered a delicacy – even if it just might be bad for you.