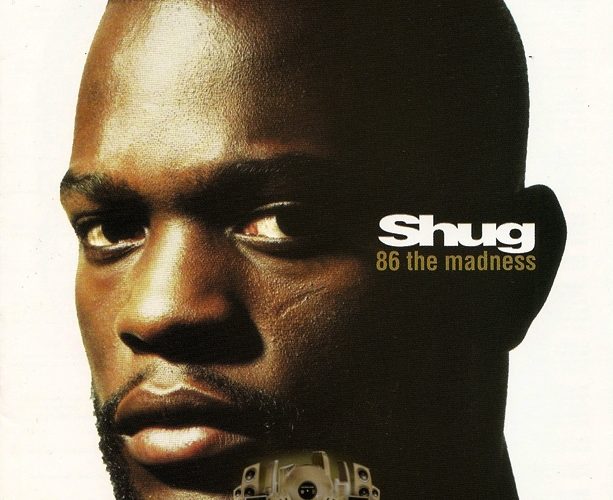 Those of you who are long-time RapReviews.com readers are familiar with my “bargain bin theory” but for the newcomers out there I offer this brief synposis – take a chance on a cheap CD by a rapper you’ve never heard of once in a while. Some may be brilliant, some may be garbage, but either way you’re only out a few bucks. In this manner did I come across Shug’s “86 the Madness.” If you’re confused this is not the same Shug as the Big Shug closely associated with GangStarr. Scant information exists about this artist either on OR offline so the most that can be said about Shug is the same as what’s revealed listening to the album itself – the rapper hails from the Western Hills section of Tucson, Arizona. Ask yourself how many of today’s top hip-hop stars you’ve heard of throwing shouts out to Tucson and you may have your answer why this ended up in the bargain bin. Nevertheless somebody in the Rush Associated Labels family saw enough in Shug to sign him to a deal and release this album to stores in 1996. Songs like “Run From the Undercover” reflect why:

“Gotta shoot my way up out this motherfucker should I hear the cops comin
I better start runnin
They ran out of shells, the clip’s loaded
I hit two of them pigs, buck buck, try to jack me now fool
Down the nearest the backstreet, damn I’m on feet
Watchin every car, cause the punks tryin to creep
Western Hills, oh Western Hills here I come
Runnin from the undercover cop ain’t no fun
Crooked-ass cops just shootin up shit like it ain’t no thang
Tryin to start up the gangbang
In my hood ain’t no fuckin set trippin
Niggaz do the bleedin, cops do the crip-plin
You mother-fuckers dare shoot my cousin in the back
Killed him on the spot pig!
It’s open prey on the black head
Shoot ’til the black’s dead
Run, better run little brother, they killin off our color
Run from the undercover
“

Rapping over a funktastic sample from the Barkays “She Talks to Me With Her Body,” Shug’s heavy baritone becomes eeriely reminiscent of California rap legend W.C. It’s more clear due to the wit and humor he inserts into his otherwise hard raps, and the subject matter nails the comparison down to a tee. Shug is clearly a “let my nuts hang” kind of rapper who’s unafraid to say exactly what the fuck he thinks. If Shug’s topic matter is any indication, Western Hills would be just as rugged as the streets of Compton or the 5th Ward of Houston. In Shug’s hood the police are brutal racists, the gunplay will make “Your Brains Hang Out” and even the homies are suspect – particularly if you come up on a record deal like Shug did. The advice has been often repeated in hip-hop, but “Ride Your Own Dick” still clicks thanks to Young D’s production and Shug’s unapologetically macho views:

“Claimin that you’re rich, top notch in the streets
But when it comes to eatin out you ask me to treat
So you made a few bucks from me, that’s alright
But soon as you got it, you gave it to the pipe
You’re the kind of brother that won’t show up
When it ain’t no money cause you don’t give a fuck
But soon as a dollar bill hits a nigga pocket
Yo’ ass come around fast as a rocket
Hand stuck out, talkin ’bout can you borrow
Sayin you got bills, that’s due tomorrow
Knowin God damn well that you can’t pay it back
Tryin to juice a nigga for his money, that’s whack
If I was quicker I’d slap you like a bitch
Now the dog got his tail between his legs
Ride your own dick”

Shug doesn’t spend the entire album lecturing on truths of manhood and verbalizing the graphic details of Western Hills. He takes time out to “Be Thankful” for his moms and pops working with a smooth William DeVaughn sample laced up in the cut by Madball. On “Party Til Your Brains Hang Out” he raps over some classic Roger Troutman “More Bounce to the Ounce” sounds and regails the listeners with a tale of how he partied with the mayor and “got him drunker than a skunk” while he slept with his wife. “C.O.D.” is another smooth Young D track and although the title leads you to think it would be about drug sales it’s actually an ode to getting pussy. If there’s any doubt though that Shug is harder than the hardest, hard as hard can get, “Fuck a Bitch Fever” will definitely answer that question.

“Nowadays, a hoe think she so fly
That she can straight whip the pussy on a guy
Shit, get ’em sprung, hung off the hoe’s tongue
Throw the whip appeal, cause that shit’s fun (aw yeah)
Like to see a nigga cry when they leave
Wanna see you beggin, just pull on her sleeve
Wanna try to break you down, make you feel you need her
In order to get the bitch back you gotta eat her
Make a bitch a promise, offer her a ring
Tell the girl that you would treat her like a queen
But if you’re real to the heart and got it clout
Do yourself a favor, and throw the bitch out
And tell her.. we got fuck a bitch fever
Weeeeee, got fuck a bitch fe-ver!”

It’s amazing how well “86 the Madness” plays despite being over ten years old and getting major distribution with no publicity whatsoever. In part this has to be attributed to the production by Young D and Madball, who handle nearly the entire album with an “if it ain’t broke don’t fix it” philosophy of using classic funk beats mixed with their own personal touches. Some might call it a lack of creativity, others would say if it works it works. After all do Roger Troutman and George Clinton ever really go out of style? The majority of the credit has to go to Shug though, who comes straight out of Tucson yet bangs with a style that would be credible in any hood anywhere in the country. If Shug has any major flaw it’s that he is largely too hardcore for any crossover appeal, which probably caused RAL to quietly drop this album and release him from contract so they could write “86 the Madness” off as a loss for tax purposes. If you happen to find this album in a bargain bin though don’t pass it up – Shug may have gotten a raw deal but you won’t if you score this unheralded rapper’s release for $5 or less.