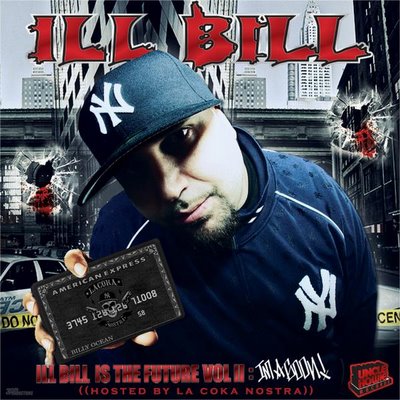 Non Phixion, more than any other Hip-Hop group, turned me into an underground Hip-Hop fanatic. For a young, white kid from the ‘burbs – like myself – to hear rhymes by young, white kids (such as Non Phixion’s Ill Bill, Goretex, Sabac Red, and their producer Necro) from the rugged Glenwood Projects of Brooklyn New York over beats by Pete Rock and DJ Premier? Shiiiit… it was game over. I still hold their seminal 2002 debut, “The Future Is Now,” close to my heart as a personal classic, and my views on rap were changed radically by how three dudes could spit Nostradamus-type prophecies with a street swagger that even Mobb Deep would be hard-pressed to match.

However, the star of the group was always Ill Bill. From the minute he dropped his first two bars on “The Future Is Now”‘s intro, “Futurama,” you knew that you were listening to something special. But, as the saying goes, “things change, mad things rearrange,” and after all three MCs dropped solo albums, the group officially disbanded because of internal conflict in July of 2006. To hold things over for fans hungry for more of Bill’s material following his 2004 solo debut, “What’s Wrong With Bill?,” in late 2006 Billy Ocean dropped a mixtape, “Ill Bill Is the Future. Vol. II: I’m a Goon!,” which served as the first of two precursors to his sophomore effort “The Hour of Reprisal.”

The first thing that you notice about the post-Phixion Ill Bill is that his voice has altered incredibly since he first came out. It’s changed from a high-pitched, almost nasally tone to a deep growl that can only be compared to your favorite WWE Superstar. But, unfortunately, the voice isn’t all that’s been changed on this mixtape: Ill Bill’s horrorcore/shock value rhymes have little to no point now, as opposed to what he was doing earlier in his career. The fact is that even when he does political pieces on “I’m a Goon!,” they tend to be interspersed with gratuitous violence as opposed to sticking to the subject. Compare the mixtape’s “Push the Button” to his debut’s “American History X.” While the former sees an erratic Bill switching back and forth between superfluous savagery and fight-the-power-style ranting, the latter remained fixed on the subject that it was SUPPOSED to tackle. For those who find this mixtape as an introduction to the emcee, it might not be as annoying, but to those of us who have copped most of Non Phixion’s material in the years since their debut, it’s very frustrating to hear someone with as large of a fanbase as Bill’s change up their formulas this late in the game.

However, there are moments when Bill’s new style works in his favor. Peep, for example, the mixtape’s intro, the Necro-produced “Focus on Bill,” where we still find Bill waxing poetic about everything from violence to social ills to R. Kelly-style debauchery:

“What’s going on? Our favorite entertainment is violence
I’m addicted to it myself, in fact, I’m part of the science
Part of the problem, but I don’t wanna solve nothin’
Fuck you, pay me, I’ll write myself a Grammy, I’m a hustler
Honestly, though, I’m not part of the problem at all
I’m the perfect reflection of the devil and God at war
This is LCN, baby, La Coka Nostra
You disrespect me, homey, I’ma soak you with toasters
In other words, I’ma turn your world into a funeral
Your life into a bloodbath, your girl into a urinal
This is truth, shoot first, we buck shotties
Coroner come in the black van to clean up bodies
Hour of Reprisal, it’s the re-up, papi
You’re a fuckin’ asshole if you think you can stop me
If I kidnap the judge’s wife, justice to the people
Shoot the policeman, justice to the people
Overthrow the government, bring justice to the people
Wanna hear my new album? This is just a preview”

The verse, kicked over an infectious guitar loop and subtle electronic keys, probably best exemplifies the mixtape: while Bill’s wordplay and sadistic wit are still intact, it seems as if he doesn’t know which direction he wants to go in; is he an intelligent hoodlum, or simply a hoodlum? As with most mixtape fare, Bill overwhelmingly chooses the latter; unfortunately, it only works when his guests are up-to-par (peep his Raekwon collabos, “Thousands to M’s” and “Enemy,” as well as his crew La Coka Nostra’s roll call “Fuck Tony Montana”), instead of just dragging them down with him (the Big Noyd-assisted “Street Villains,” which just leaves the listener even more confused as to whether or not Ill Bill is condemning or condoning the ills of street life).

The other disappointment of the album is Bill’s beat selection. While the production – provided mostly by DJ Lethal and Bill himself – certainly isn’t subpar, it definitely leaves the listener missing Necro’s deadly combination of haunting samples and headcracking drums. The fact that Bill’s brother’s only contribution to the album is the aforementioned “Focus on Bill” leaves you hoping that, like Bill himself, he’s got more heat in store for “The Hour of Reprisal.” Fans who bump the mixtape may be disappointed to find that where Bill had a method to his madness in the past, here, there is nothing but madness, and while Bill still does it better than 75% of the underground scene, it wears thin over twenty tracks. But until homeboy finally drops his second CD, I’m gonna spend my time playing “The Future Is Now” on repeat, and hoping that the Ill Bill that all of his fans know and love happens to show up again and make us all remember the reason that we loved his music in the first place.