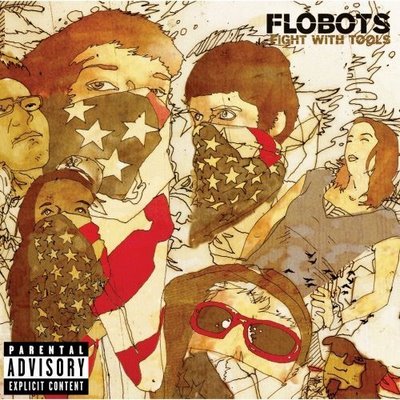 As much as I like politically charged, thought-provoking hip-hop music blowing through my headphones and speakers, it’s often easy for artists and groups cast in this mold to get overlooked in the overwhelming tide of bling bling banality. Take the Flobots for instance – a Denver, Coloradio based group which I had never even heard of until just this month. I find myself a bit embarassed at my ignorance of their steez particularly given they worked their way from local radio play to a record label deal off the strength of their live performances and a single called “Handlebars.” The Flobots made their bones the way so many Bay Area and backpack MC’s do yet their hustle completely escaped my notice.

Thankfully a promo copy of Flobots hit my inbox to provide me with a wakeup call, and I’m here to say the crew are ready to “Fight With Tools” – and I’m not talking about the kind you tuck in your waistline and lift up your shirt light to let people see. Frontmen Jonny 5 and Brer Rabbit aren’t pulling punches with their rhymes, rocking a steelo that’s part Jurassic 5, part Sage Francis and part Zack de la Rocha. Take “Same Thing” for example – a song rocking live trumpets by Joe Fortone while spitting lyrics that are completely uncompromising about their left-of-center views:

“We want money for healthcare and public welfare
Free Mumia, and Leonard Pelier
Human needs, not corporate greed
Drop the debt and legalize weed
We say YES, to grassroots organizations
No to neoliberal globalization
Bring the troops back to the USA
And shut down Guantanamo Bay!”

Bill O’Reilly fans will probably shake their heads in disgust and walk out of the room when you drop Flobots in the boombox, but “Handlebars” notes that the members of the group are “proud to be American” and live in a country where you’re still allowed to have your own point of view and speak on it – at least for now. It’s still a country where anything is possible and if you’re a Flobot you know not your own limitations.

“Look at me, look at me
Just called to say that it’s good to be
alive, in such a small world
I’m all curled up with a book to read
I can make money, open up a thrift store
I can make a living off a magazine
I can design an engine sixty-four
miles to a gallon of gasoline”

Would any of this be interesting if the Flobots didn’t rock? Perhaps – but it would be a much harder sell. The Flobots would be playing coffeeshops and tiny hole in the wall venues without the bass playing of Jessie Walker, the drums of Kenny Ortiz, the guitars of Andy Guerrero and even the violin playing of Mackenzie Roberts. The spontaneous instrumentation that runs behind these bars allows the ‘Bots to flow from one musical style to another with almost effortless ease. They skat and croon a tune on “Never Had It,” invoke the spirit of George Kranz on “Combat,” rock strings with a flow that’s pure Fort Minor side by side with poetry from Minnie Baldwin on “We Are Winning” and speed spit the rap to a sly funk slap groove on “Mayday!!!” The versatility of the Flobots sound makes them very hard to pin down, but it also makes for an entertaining musical journey that doesn’t get bogged down by their politics or a preachy didactic presentation. If this crew can be said to “Fight With Tools” their most insidious one is music that makes you think about the big picture while you’re jamming to the music.