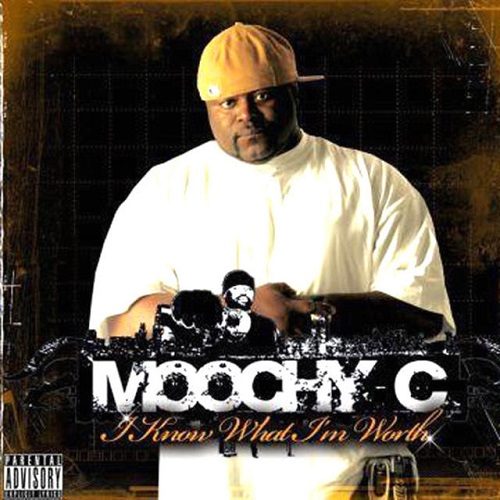 As a distant second to Chicago, Minneapolis may very well have the second best rap scene in the Midwest. Moochy C’s effort entitled “I Know What I’m Worth” is more of a conformity to the typical rap than some other acts you may have heard from the area like Atmosphere and Brother Ali. In that sense, it is refreshing to see such a variance within a given region, but being a counter to such forward thinkers as the aforementioned artists might automatically pigeon-hole Moochy as just another emcee on the block.

After getting past the unnecessary “don’t hate” skit and intro that open the album the listener is given a hometown anthem in “Minnesota” featuring T-Lace and Bookie. It is always intriguing to see how a given artist portrays the city they rest their head. The beat comes through in rather dramatic and clashing fashion. Moochy and company manage to avoid the over-generalizations of their city and note specifics such as:

“Let me take you on a tour of these Minneapolis bricks
You got killers on 26th
Hustlers on 36th
Gunplay on Golden Valley
They got sex all day on Broadway
That’s just the north side you could lose your brains in broad day
Southside, 38th to Chicago
Chicago and Franklin, Lake Street
Back in the day when you was on the Southside you had to have heat”

This not only helps local listeners legitimize the rhymes, but also makes outsiders (like myself) believe that the ghettoes of Minnesota may be just as harsh as the cities that are usually painted in this picture. The following track, “City Slicka” finds Moochy further proving himself to be a true city boy. “Get Fucked Up” is a remarkably subdued listen that will remind many of the party-loving Devin the Dude. It is surprising to hear a song named the same as the Iconz hit of the past but with such a different sound. It features a boom bap sound and some nice DJ cuts as Moochy C spits in a slow, hypnotic way.

The real reason a lot of non-Minnesota natives will listen to “I Know What I’m Worth” is to hear Slug (of Atmosphere) drop his verse on “The Club”. As previously mentioned, the styles between these two clash but they manage to find a nice middle ground with this track. The beat sounds like a hollow whistle whimsically sweeping along. Slug drops these stellar bars:

“I can’t believe this fool’s got me up inside this club house
I just want to buy my weed and get the fuck out
All these women look like goddamn strippers
And I bet these dudes carry hand mirrors
Now why you thinking you should holler at me?
Like I’m going to buy you a drink at 12 dollars a piece
You tripping chick, in fact that one your sippin
I’m going to pick it up and finish it
When you go have a cigarette
I don’t care whose Bacardi this is
Just like I never cared whose party this is
So why you in my face trying to start up some shit?
What girl? I’m growed up, I don’t party with kids
I’m the type that brings home a fifth
I don’t fit no dress code mode I’m on some home shit
From the bars to the hoopty, to the back
Yo Moochy, where you at? Come give me the other sack”

The also featured EMS and Moochy do not stand a chance, in fact, Moochy gets outclassed on his own ish a few times too many, mainly because his style is so straight forward that he remains simply consistent. Some relative unknowns show up for the plethora of guest spots and you will be introduced to some truly unique and unorthodox emcees.

Though he rarely surprises with his rhyme scheme and structure, Moochy makes up for this with a wide variety of beat selections from the old school (“We Don’t Honor That Shit”) to the softer soul-inspired beats (“We Gon Ride”; “What’s Poppin”) effectively keeps the album from becoming mundane. He is also thoughtful enough to keep a wide range of subject matter ranging anywhere from the hardcore stuff, partying, all the way to love and an ode to his Mother.

The highlights on the album are the venomous “Recognize the Real” and the ominous “U Don’t Know Me.” Here we find Moochy C sounding confident akin to rapper Trae. Rarely do you come across an artist who sounds more believable when he is dropping hardcore bars, yet Moochy is one such artist.

Sure, at a bloated 22 tracks, there are bound to be some weak efforts and “I Know What I’m Worth” has it’s fair share of filler; however, there is more good material than your average disc that will make skipping a less wasteful experience. There is definitely not anything that will make you gag in distaste. Even if Moochy C’s image seems all too generic; complete with the white t-shirt and bright yellow backward cap, there is something more to this guy. He is not the best rapper you will ever hear but there is something to be said about putting together a complete album that hits on all cylinders. So, without being facetious, I look to Minnesota to keep bringing that real shit.