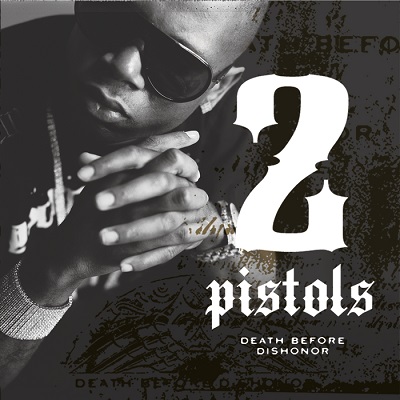 The image of “2 Pistols” is one that carries much weight and admiration. Beginning in the wild west, “2 Pistols” were associated with craziest and most vicious outlaws. The outlaw caricature survived well past the days of the cowboy and found its way into action movies and comic books. Ultimately, the image progressed to the most modern incarnation of a bad ass outlaw â€“ the video game hero. Anyone who has divulged in the pleasure that is a first person shooter knows that few things are sweeter than upgrading to two weapons. Whether it stems from a sincere concern of not making your empty hand feel slighted or the primitive idea that more is better, there’s something about doubling your firepower that appeals to the senses. Jeremy Saunders might have hoped that the same attraction would extend to his rap career if he adopted the alias of “2 Pistols.” Mr. Saunders does his best to live up to the lofty expectations one would have of a wild “2 Pistols” toting bad guy. Illegal activities are here by the boatload. Sexual escapades are passed along like folk tales. The requisite posse of goons is present as well in the form of T-Pain, Trey Songz, Slick Pulla, and Blood Raw. “Death Before Dishonor” could make 2 Pistols hip-hop’s modern Jesse James, but does it?

You’ve likely heard 2 Pistols’ hit single “She Got It.” It’s one of many T-Pain tracks currently in radio rotation and has been remixed and re-rotated before the album even dropped. Unfortunately, the remix isn’t included here so we don’t get the pleasure of hearing Twista drop a verse. The original is nothing more than another stripper love song:

“Excuse me while I talk to you for a second
Lil mama so fine she got the whole squad sweating
Damn, how you fit all that in them jeans
Was the question that I asked followed by let me buy you a drink
Young boss baby I treat you to the finer things
Neck bling, wrist bling, wedding ring, no I’m playing,
Might light your neck or your wrist
But you gotta ride nice dick and
Take trips with the bricks
She got it, she got it that’s what Pain saying
Them other niggas lame man, lil mamma I got the game plan
2 Pistols, BMU boss I make it happen while they talk
Ridin 6’s while they walk”

If you can get a chickenhead to fall for you playing this wackness, more power to you, but please remember that child support lasts a full eighteen years. 2 Pistols doesn’t stop catering to the ladies there as he hits us with “Let’s Ride,” “You Know Me,” “Flexx 2008,” and “That’s My Word.” None of the songs have anything of substance, just candy coated brags meant to appeal to the radio. “Flexx 2008” is actually a remake/update of an old Mad Cobra song, for those who like butchered dancehall music.

2 Pistols’ commercial tracks could be forgiven if he brought the heat elsewhere, but both pistols are stuck on empty. The title track is just generic street talk about not being a snitch. “Been Throwing Money” let’s us know that 2 Pistols was wasting money before all these other broke rappers started doing it. “Getting Money Mane” finds 2 Pistols explaining just how he got the money that’s been thrown, apparently selling drugs is good business. “We Run It” might be the best track on the album just because Blood Raw and Slick Pulla add some stylistic variety to the monotony.

Basically, 2 Pistols is the generic, value priced version of the outlaw/video game I discussed earlier. In theory, everything required to make a good rap album is here â€“ success story, drug dealing, ladies, flossy things â€“ but things just don’t add up as they should. The Justice League production team does little to help things as their southern fried synth beats lack any identity. 2 Pistols himself isn’t as creative or compelling as he should be given his subject matter. He got the basics down, but did little else. If you absolutely love this type of rap and already ran through the good stuff, 2 Pistols might be something to hold you over. For all others, “Death Before Dishonor” is about as enjoyable as having “2 Pistols” and no ammo.