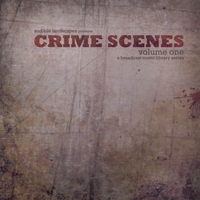 Audible Landscapes is a production team that hails from the LBC, home of Snoop, Sublime, Wilson High, and oil rigs. “Crime Scenes” is Audible’s fourth album of instrumental hip hop, and first under their Broadcast Music Library series. The idea of “Crime Scenes” is to create a soundtrack to an imaginary film, ostensibly with crime scenes.

The music is composed with snapping snares, skittering high hats, and a mix of live instruments and moody keyboards. Audible Landscapes are at their best on tracks like “Vampires.” It has an accordion and keyboard, which create a sinister atmosphere with a hint of Bohemia that definitely brings to mind Dracula. “Timescape” has a plucking harp that sounds like Dr. Dre meets the X-Files. “The Tower” and “Detectives” have fairly head-nodding beats, while “The Jigsaw Man” and “Blood Rain” create haunting, brooding moods. The tracks fit their names, and “Crime Scenes” lives up to its goal of creating soundtracks for unmade films.

“Crime Scenes” sets a mood, and it might make some good score music. It is less compelling as a stand-alone piece album, however. It is too mellow, a little cheesy, and nothing about it really stands out. In the end it falls prey to the problem that plagues a lot of instrumental music: it makes decent background music, but that’s about it.