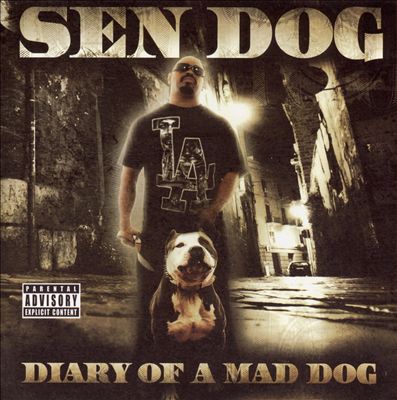 It’s the long awaited, highly anticipated, tremendously overdue and finally coming through solo album in the history of hip-hop! After years of playing second fiddle to the nasally flows of B-Real, loyal Cypress Hill member Sen Dog finally gets to let his own star shine on “Diary of a Mad Dog.” This is a watershed moment in rap music. This is the album that will change the game forever…

Aww let me stop playing. I couldn’t keep that up for another three or four sentences no matter how hard I tried anyway. I mean absolutely no disrespect to Sen Dog but in no way was a solo album from this Cypress Hill loyalist “long awaited” or “highly anticipated.” In fact I couldn’t have been MORE surprised when a publicist informed me that Sen Dog was dropping his own LP. I pondered this for a while. I realized theMAINSTREAM might not be highly anticipating a Sen Dog solo album, but my OWN curiosity was piqued by the idea. We’ve heard little tidbits of Sen Dog sandwiched between B-Real’s charismatic weed enhanced flows for years – sometimes witty, sometimes psychopathic, but always a footnote to the star power of B-Real as a frontman. Let’s put it this way – if you and a friend were going to a party as Cypress Hill for Halloween you’d end up fighting over the Louis Freese costume instead of the bag of chronic. That’s EXACTLY why I wanted to hear this album. If anybody has a lot to say and has had little chance to say it, Sen Dog is the man. I pictured Suburban Noize backing him up on promotion, distribution and possibly even production and the possibilities seemed wide open. 17 years since the first time I heard Sen flow solo on “Latin Lingo” I can say that even though “highly anticipated” might be bullshit, “tremendously overdue” is definitelyNOT. A solo Sen Dog album should have been done a LONG time ago.

Sen caught me by surprise with the opening track “Fumble.” The Pharmacist Chris beat, not to mention the Dog’s flow, both seem more suited for a hard rock member of the SubNoize label like Hed PE. I can’t fault Sen for making the most of the rock’n’roll flow though, owning the track with a rap that talks about thinking you’re about to win only to realize you didn’t get there in the end.

“So I pray to the Lord all day
Please help me change my ways
I know that I did wrong
Gotta be some better days
And I’m livin up in this hell
But can’t nobody tell
Just me myself
and to hell with everybody else!”

The short choppy flow doesn’t allow for Sen Dog to be very loquacious, but to Sen’s credit he rides the beat instead of trying to override it. He sounds more comfortable on the DJ Ace produced “Capo” though, a song which brings the latin swagger you would expect and actually sounds remarkably close to being a lost Cypress Hill track. The weeded paranoia is certainly there, as Dog warns that you have to watch your back at all times and says of his muscular street hustle “when will it stop, nobody knows!” The next song “Biggy Bang” falls somewhere between the two, as a simple one note beat marries a vaguely rock backdrop while Sen Dog brags “gangbang fo’ America, we ain’t scared of ya/all around the world we got people in your area.” The most standout track early in the album is “Hard in the Paint” as Jeffrey Simmons Jr. comes with an uptempo beat that forces Sen Dog to push himself to the edge of his flow ability, and he proves to be up to the task:

“Clear the lane and watch me go through it
You’re dazed and amazed as you watch me do it
Gotta have substance and be about somethin
Otherwise they gon’ know that you frontin
What you be about, what you believe in?
What you represent? I can’t see it
Legalization for the whole nation
We gon’ get there we just gotta be patient”

Sen Dog benefits from the chance to advance on his own here, showing that he’s had a lot more to say than he’s been able to in the Cypress Hill team. That’s not to say that he’s been held down by anybody in the CH crew, as there wouldn’t be ANY interest in his solo album had he not become a star rolling with them, but it does show he could have been spitting more strong tracks on his own than he had until now. Suburban Noize seems to be an incredibly good fit for him as well, as SubNoize is close enough in spirit to the Soul Assassins (particularly pharmaceutically) that he doesn’t move too far away from his comfort level, while still managing to sound unique. “Juggernaut” shows Sen Dog funking it out, while “Don’t Sleep on the Streets” is a collaboration with Kottonmouth Kings own Johnny Richter that benefits both. “The Sicko” has Dog spitting a hardcore banger anthem like a loco vato, while “International” is the kind of posse-all-in SubNoize track you could see Sen Dog performing on one of their many hip-hop & rock tours. You’ll hear a lot of songs that will remind you of Cypress Hill like “What You Wanna Do,” but the one thing you WON’T hear is B-Real. He makes no cameos anywhere on “Diary of a Mad Dog” and it’s only to Sen Dog’s benefit, as it proves he can do it on his own and not need to rise Freese’s coattails.

15 tracks. “Diary of a Mad Dog” has just enough material for Sen Dog to make a name for himself, but not so much that you’d be overwhelmed by the prospect of a guy you’d barely heard on his own suddenly dropping an entire album of his own material. Cameos by members of the SubNoize roster help – he doesn’t necessarily have to do it all on himself – but you’ll probably be surprised by how well it works when he does. There’s one thing you can definitely say after “Diary of a Mad Dog” is done – you may not have been anticipating Sen Dog’s FIRST solo album but you’ll definitely anticipate his NEXT one.