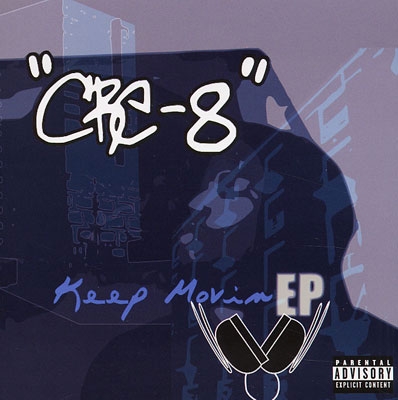 Florida isn’t a state known for organic, soulful hip-hop. That is not to say the state hasn’t produced its fair share of quality rap albums. Even though groups like The 2 Live Crew and Poison Clan have made some classic albums, the average fan doesn’t realize that Luke Records did more than make booty music. Florida’s image as party rap central didn’t improve with recent acts like Pitbull and Florida who also made their name off of making bodies move. As is the case with any state in the union, there is always a variety of styles to be found but you have to know where to look. In Florida if you’re looking for slower, relaxed, and more thought provoking raps then Potency Records is one place to look. The independent label’s latest release is an EP from newcomer Cre-8 who reps a very different style of rap coming out of Florida. With only six tracks, it is hard to get a full gauge of Cre-8’s potential, but this EP definitely shows promise.

Cre-8 kicks things off with “Forever Fearless” where we get a smooth loop for the beat, which is simple but effective. Cre-8 uses the occasion to do a little battle rapping, dropping some clever punch lines along the way. The best line comes from guest rapper Exodus when he declares he’s “claustrophobic so I think outside of the box.” “Hot Riden” finds Cre-8 joined by a slew of rappers over a funky horn sample. The Street Officialz crew isn’t as innovative on the mic, but for a street oriented crew cut the song does well. “Danger” gives us another funky sampled beat, this time flutes, voice samples, and pianos bounce off each other while Cre-8 drops some more battle raps claiming he “rock[s] well like the city in Texas.” “Hootie and the Bloated Fish” is the first track where Cre-8 changes up his steez and shows off his story-telling skills. The production is clearly inspired by the jazzy boom-bap of ATCQ and goes well with Cre-8’s soft, yet raspy flow. “3 Years Later” is another soulful joint where Cre-8 mixes his storytelling and battle raps for a nice balance as he addresses all that’s gone on in the last three years of his life. The EP ends with “From Within” where Cre-8 unleashes many of his frustrations with his career, the Florida hip-hop scene, and rap music in general.

In the end, “Keep Movin” presents plenty of potential for Cre-8. The last three tracks are the dopest due to the fact that Cre-8 mixes his styles without focusing too heavily on the punch line aspect of his game. He drops some memorable punch lines on the first 3 tracks, but nothing so amazing that it can stand on its own. If he’s capable of crafting a well rounded album more in line with last half of this EP, Cre-8 will be a name to remember.