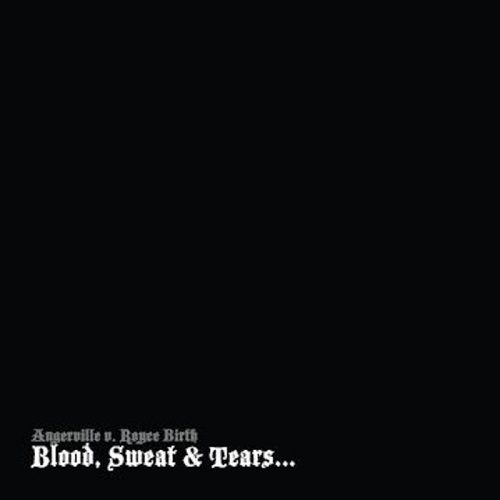 Angerville may be the coolest name for a hip-hop group I’ve heard in quite a while. Sure, it’s basically a different take on the Shadyville DJs, but still it brings up an image quite quickly – a city full of mad rappers. When I say “mad” I don’t mean robbing other rappers with an annoying voice “madd,” I mean angry at the world mad. Some of the best rappers to come out have been angry when they delivered their best work. Angerville isn’t quite as angry as their name may imply, but they still turn in a commendable performance on this collaboration album. MCs Conscious Thought and Fortunato make up the group Angerville. Originally consisting of three emcees, third group member Ill da Shystee was tragically murdered at the young age of 22. The two remaining emcees are based in Aurora, Ontario and are the latest in a long line of Canadian acts to show they can hang with their US counterparts. Not much info can be found about producer Royce Birth, but he handles the beats on “Blood, Sweat & Tears.”

The crew immediately kicks you in the gut with “Built From Scratch.” Royce Birth puts together a menacing beat with loud, distorted horns and alarm-sounds – on paper it sounds like a mess, but it is truly gritty, hardcore gold. The rappers take full advantage of the aggressive beat:

“We impact you emcees who want to be real
Talk shit and we gon’ take you on a trip to the ‘Ville
I’m old school still writing all my rhymes with a quill
Shining so bright I change the forecast at will
Suns come out, we bringing that heat you feel
Grab a rapper by the face and put his grill on the grill
Like an Ice Cube album we gon’ kill em at will
Emcee’s worried bout the face, while we building our skills
Leaving all you snakes shook, cut your throats like ills
We ain’t here to pay bills, we just here to build
Bring it back to the skills, leave that shit in my will
I can’t make the world better so I’m making it ill
They telling me chill, but really they ain’t knowing the deal
There’s a war on hip-hop, people saying it kills
They outlaw, thinking music is a cause of they ills
Not realizing that violence is a part of they wills”

These guys aren’t the best rappers out there as they rhyme the same syllable for a whole verse on this track, but they bring energy and rawness to the music which makes up for their lyrical shortcomings. This energy, coupled with the dope, dark beats, makes for an interesting album. The main drawback for the group is the lack of diverse subject matter. The track titles are plenty interesting with names like “Uprise of the Machines” and “Broken Drums” but in the end a lot of the tracks cover the same subject despite the differing song titles. Given that the album is divided into Side A and Side B on the tracklisting one would think there would be a big difference between each side, but Side B gives us more of the same. “Marauders” flips a simple, but funky, loop but the raps themselves are about the lyrical and physical prowess of the rappers involved which can be said about 75% of the album. A few tracks deviate from the pattern, “Heavyweight Slang” being the highlight, but overall most of the album consists of trash talking verses over different beats. That said, these guys stay interesting despite the lack of diversity in the music and I have to admit given their angry steez one should expect angry trash talk aplenty.

Overall, “Blood, Sweat & Tears” is an interesting album sure to contribute positively to the discography of all rappers and producers involved. Royce Birth has a knack for flipping soul samples in a dark and gritty manner with great success. Even when his beats lack the dark element, they tend to have a catchy, yet rugged element to them that make you take notice. Angerville’s aggressive style fits nicely over these rugged beats. From this album, I would say that Royce Birth is the star of this show with his production, but Angerville does a great job riding his beats. Together, the collaboration makes for some head-nodding rap music. Given the group’s darker and aggressive style and the gifted producer I can’t help but compare these guys to Jedi Mind Tricks. The same complaints lodged against that group, mainly the lack of diversity and Vinnie Paz’s lyrical shortcomings, can also be lodged against this group. With that said, I personally enjoy JMT despite their shortcomings and I enjoyed Angerville’s latest as well. There’s room for growth, but this is definitely a group underground rap fans should keep on their radar.