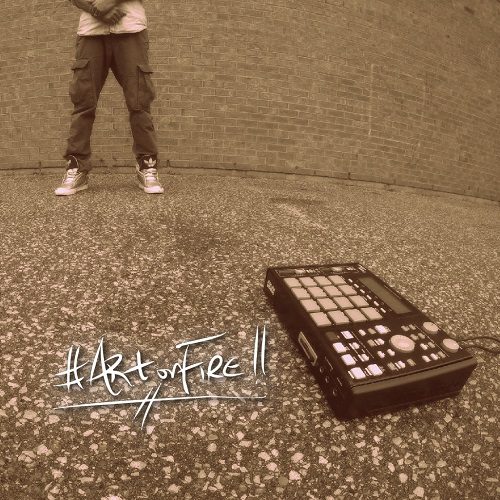 I should probably make it a policy to not review an album when I’m mentioned by name in the one sheet that accompanies it. I question the ulterior motive of the label offering it. Quoting from me should be flattering but instead it just makes me cock my eyebrow like The Rock with suspicion. “Am I a roll now? Because I feel like I’m being buttered up.” Thanks for showing me love, I’m not turning it down, but just know that the same reason you liked my last review might be the reason that you hate this one too. I’m only going to hand out what you’ve earned – no more or no less.

“Art On Fire!!” is an album I spent a good deal of time trying to wrap my head around, which is infinitely preferable to wrapping expensive cars around heavy duty utility service constructs. The point is that it’s not easily digestible, and over the course of 49 minutes I started to wonder if this was in fact the same artist who did “Caesar Is Home” or not earlier this year. royceBIRTH is a well known producer and did a fine job lacing his own album on the last outing, but starting right from the opener I’m confused – and not just because it’s called “Goodbye!” BIRTH seems to be signaling this album is a swan song, but I wouldn’t want to go out on this note. The vocals drown underneath a muddy instrumental, gasping for breath but never quite drawing enough oxygen to be heard clearly.

Things just get weirder from there. “Point of No Return” is an instrumental that can’t seem to make up its own mind what tempo to be, with a flanged whining synth sound that’s borderline headache inducing. “In My Darkest Hour” desperately needs some strong percussion or a compelling bassline, and once again the vocals are drowned out save for the words “I was waiting for a big inspiration – inspiration never came.” That’s clear. Instead of trying to review this album in consecutive order from start to finish, I wound up randomly punching up tracks trying to rediscover what I liked about BIRTH. A few times I came close and “Kismet” was one of those moments. The musical backdrop wasn’t that hot, but I was feeling the double tap of the beat – some really old school hand clap soul that saved the song for me.

Several other tracks reflect the royceBIRTH that I became a fan of on his last go around. “Root For the Villain” still suffers from muddy vocals, but it seems more charming with BIRTH singing over his energetic instrumental. “Hello!” really redeems the album at the end – sounding like a leftover track from “Caesar Is Home” that’s actually a bit out of place on this LP. And if you have to accept that royceBIRTH wanted to go eclectic for this project and create totally experimental tracks, the minimalistic “Let It Bleed” is one of the winners. The instrumental jumps up and smacks you in the face at the start and the finish, then goes into chill mode for the rest of the presentation. It draws me in and that’s a win.

I’m still convinced that royceBIRTH is a talented cat, but one thing has definitely not changed from this review to the last one – it’s not my favorite thing to hear royceBIRTH sing. This time the biggest problem is that BIRTH simply got a little too clever for his own good, releasing an album full of his wildest creative impulses without considering if the audience would enjoy them as much as he did. You know who else does that? Kool Keith. I respect Keith Thornton as a hip-hop legend, but he’s released some totally unlistenable s–t I wouldn’t wish on my worst enemy. I’ve got good news though for royceBIRTH – when compared to the bottom of Keith’s catalogue “Art On Fire!!” isn’t that bad. It’s not high praise though and I suspect this is not a review they’ll quote from in their next press kit.