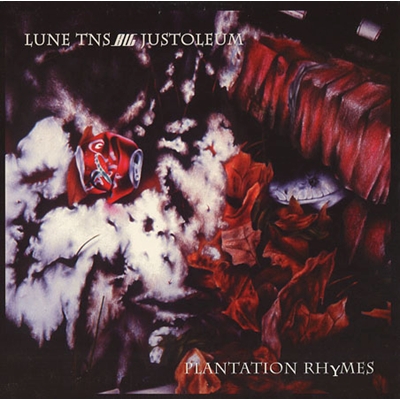 Jus is primarily known as one third of Company Flow, where he functioned as both rapper and producer. The group split in 1999, and while Mr. Len, El-P, and Bigg Jus went their ways, they remained quite productive – multiple albums, side projects, and so on. In their own ways, they are hip-hop icons, especially in New York City; few artists are as “urban,” as they’ve turned complex cacophony almost into a trademark. El-P may be ahead of Bigg Jus in all respects – he is a subtle lyricist, and happens to be one of the greatest, most consistent producers in the history of rap – but there’s no denying that all three contributed to the greatness of “Funcrusher Plus.” In fact, subtract Bigg Jus, and you’re left with no ‘counterpoint,’ and Company Flow becomes less interesting, on many different levels.

But… a counterpoint has to evolve in a solo effort. In “Funcrusher,” Bigg Jus is often vocally quick, muffled, and monotonous – not always, but often. In rap, this can serve an artistic purpose, as songs function more as wholes than individual parts. Thus, in the Company Flow album, Bigg Jus’s verses – the counterpoint – are like a building tension, and El-P – vocally sharp, aggressive, and more subtle as a performer – cuts it well. On other tracks, Bigg Jus was pretty creative flow-wise, offering enough variety to prove himself a good performer independently.

“Plantation Rhymes” does not showcase the better parts of Jus. Here, he has to depend on himself to carry each track, but he often does not. Given his monotony, which serves no real artistic purpose any longer, it’s hard to listen to an entire album of his without some concentration, which, unfortunately, does not always pay off anyway. In brief, “Plantation Rhymes” could have been improved with some variety.

Production wise, it’s pretty similar to the stuff on “Funcrusher.” El-P took a different, more melodic direction (those that complain of or praise his solo debut’s cacophony have always confused me – in fact, it’s hardly cacophony, and certainly much less than Company Flow’s album), but Bigg Jus maintained the dirty drums, occasionally melodic, atmospheric and creepy samples, and the repetitive, memorable rhythms. One of the only real differences is the complexity – in fact, it’s greater, since songs have multiple changing parts. That didn’t really happen on “Funcrusher,” and it’s interesting to finally see (and appreciate) how much of the artists’ individual creative personalities went into Company Flow. Overall, then, the production is very good.

In “Tongue Sandwich,” the first track, the above is obvious, and the subject matter here is not always cerebral, the lyrics inconsistent. For example, he might rhyme in not very memorable ways above (“That self-righteous indignation/ will get you broken like a bootleg Tony Hawk 7 for Playstation”), but then craft a solid narrative, as in “Dedication to Pray,” one of Bigg Jus’s many graffiti tracks:

“Live, from the most remote location out the corner of your eye, in the pour
rain, scratching in the phone booth on the left hand side had the word ‘PRAY’
was the illest bombing dedication
pick any station along the line
the attribute pray to God in the truest definition of all-city
and although it was a simple scratch tag
it was up crazy-silly”

As Bigg Jus continues, he connects the ‘buff,’ or removal of graffiti, the influx of less talented writers, and so on, to modern rap: urban culture goes through these cycles. A niche, it expands, and its DYI nature tends to attract less talented, less committed individuals. Production-wise, it’s nostalgic, with muffled violins looped to the same phrase, appropriate, but less complex than most things here.

“Gaffling Whips [You’ve Changed Remix]” features disturbing production, with an emphatic, heavy electronic keyboard against some purposefully incongruent vocal samples, a looped woman’s “you’ve changed,” which comes up shortly after the documentary-esque intro: it all touches on drugs, “urban renewal” (or, “removal of Negroes,” a sound bite declares), as keyboard, samples, vocals, title, and Jus himself all play against each other with some complexity. Good to see – rappers ought to treat their material as total units, and nothing less. “Gaffling Whips” is one of the best things here.

“Dedication 2 Peo” is another graffiti track, and, again, Jus undermines himself through monotony. It starts off as a narrative about his family against, as above, an incongruent, atmospheric sample, and – like many tracks here – morphs into a rather different, much darker song (dirty keyboards, scratches – damn good, too, given the content) about graffiti and riding trains at night. It’s peppered with philosophical bits, though, so it ain’t fluff. Still, although Jus has something to do with the quality, it’s his production that makes this song good.

“Lockjaw [Dregas and Gerk],” which, fortunately, has little to do with Bigg Jus, features terrible, pointless, amateurish rapping by Gerk, who drops gems like “I eat meatloaf with toxic paste,” and so on. The “beat,” by Dregas, is a brief looped sample, and the same two dull piano keys again and again. It doesn’t belong here, and Bigg Jus shouldn’t have done any favors to either.

And, there it is – a pretty solid effort, with virtually no excess. But, even if there’s no filler (which is unsurprising, anyway), it doesn’t mean individual tracks couldn’t be improved. Bigg Jus is best at complex, multi-part instrumentation and philosophical rhymes. It would be a much better product, though, if his vocals would evolve towards some distinction.