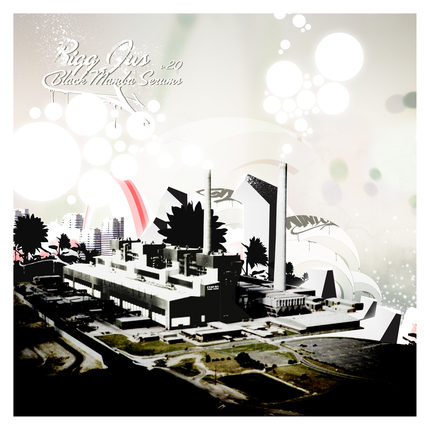 This is Bigg Jus’s third album. Or rather, it’s a variation of “Black Mamba Serums,” which in turn was a variation of the EP “Plantation Rhymes.” The first was good because it was unorthodox in sound, incorporating a mix of evocative samples, dirty drums, and a style reminiscent of Company Flow. In brief, it was ‘rough’ without being sloppy, and innovative without devolving into utter formlessness. The second, although bloated, was likewise good for the same reasons. In fact, that’s Jus’s strength and weakness. He’s consistent, but doesn’t grow artistically, which is especially problematic since, as a solo artist, he needs to evolve beyond the ‘point/counterpoint’ dichotomy he and El-P served in Co-Flow. Instead, although he offers more conceptual material, he’s cruder lyrically and vocally, and sometimes throws too much on an album, seemingly without reason. I’ve detailed the specifics in previous reviews, and will thus focus on the sequel to the original BMS here, omitting discussion of tracks these albums have in common.

In “Black Mamba Serums 2.0,” there are only 14 songs, down from a superfluous 23 â€“ a promising start, as far as variety and concision go. Bigg Jus, despite endless claims to the contrary, is not a great rapper, as he’s often monotonous, lyrically bland, or plain uninteresting. Just check any song, and you’re bound to find non sequiturs, mush, strange associations, and even the occasional clichÃ©. Still â€“ and it’s an important qualification â€“ his tracks do work as ‘wholes,’ and, at his best, Jus is not a good, but excellent producer, as this and other albums demonstrate. On “2.0,” there are a few new tracks, some remixes of the old, and elimination of excess. A good tweak, with some effective results.

“NYC Color Designer” opens the album as a new track, which, despite the signature muffled drum and base, sounds polished, presaging, perhaps, the feel of “Poor People’s Day,” a superior album for evening out the clunks in Bigg Jus’s style. Regardless, this track’s minimalist (at least in its musical gaps) enough to let Jus’s voice through as the beat drops emphatically and unexpectedly. Ah, that important little twist â€“ Jus is good at inverting expectations, with the ‘familiar,’ a concept he exports from the rough medley of “Funcrusher Plus.” “Kingspitter,” another new track, brings out some of Jus’s best work. A sharp, rough bassline dominates the entire thing, while an occasional keyboard, given its intermittent position, forces your attention to the ‘background’ noise as well – shuffles, drums, samples, and scratches, all full of variety, keeping monotony at bay. It feigns ‘lush’ or ‘polish,’ but has neither. This is talent – Jus plays with expectations, innovating along the way.

“Silver Back Mountain King” is another new track, the relentless piano (only a few keys, with an occasional digression) against Jus’s start-stop vocals. It’s a good interplay of music and vocals, and, unlike 97% of his work, the two are mutually supportive, not competitive. While neither part of the dichotomy generate good or bad art by itself, too much of the latter leads – paradoxically, almost – to a monotony of noise. In brief, the problem in musical ‘competition,’ like in some of Captain Beefheart’s work, is the drowning out of sound, thus negating whatever idea or innovation intended, but never executed. Here, by the track’s very position in the album, sandwiched between two typical Jus works, variety is key.

“Story Entangles” from the previous two albums appears as the “The Under Flippage” mix, a slightly superior, more complex version, and “You Must Be Sniffin'” is sample driven and full of vinyl ‘pops,’ but is slightly dull – almost no variation – and the performances duller, the words often inaudible, and virtually no vocal difference at different parts of each verse. Fans buy into this stuff a bit uncritically, perhaps shocked at the novelty, and little else. But, I offer an alternative. One ought to look past the novelty, and judge tracks asoverall successes or failures, not by what’s ‘innovative’ or ‘interesting,’ but whether innovation or interest translates into artistic quality. Too often, as here, it does not.

“Suburbian Nightmare Texas Size New World Order” features terribly delivered verses by all involved, although the complexity of the instrumental is interesting, if not necessarily effective. All elements are somewhat drowned out in each other, leaving an unfinished, undeveloped track. But, by the end, things sort of ‘die down,’ a good artistic choice on Jus’s part, one that should have been included throughout, alternating cacophony with melody and organization.

“Say Goodbye” features a certain Jerald Marcellus Bryant, who spoken-words himself through various banalities on racism, government, and religion. Musically, it’s the most listenable thing here, but uninteresting – no innovative arrangements, no unconventional ideas. And thus, the album ends on a light note, which is unfortunate, as Jus is consistently better as a dense producer, rather than a conventional one.