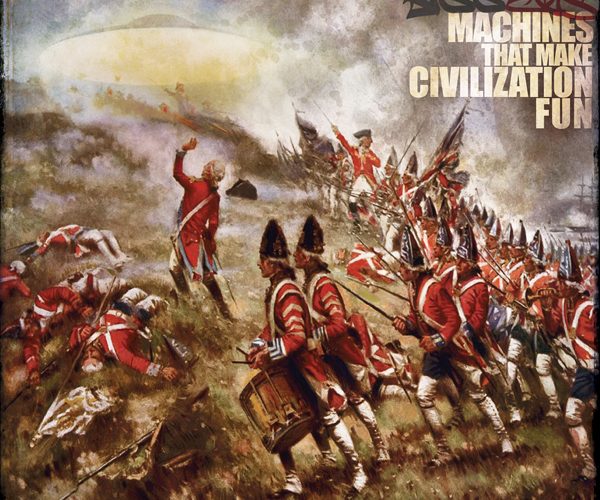 Bigg Jus made his name as a third of seminal New York underground hip-hop act Company Flow, rapping alongside El-P and Mr. Len. That group pioneered new territory in the 90s, making rap music that didn’t conform to the commercial or independent rap of the day. They weren’t jiggy, gangsta, bohemian, or conscious. Their beats, rhymes, and vibe were unique, a mixture of New York battle rap with a large dose of weirdness. Company Flow fell apart in 2001, although the group has threatened to record a new album and reunited for a few live shows. El-P went on to found Def Jux, do successful production work for Cannibal Ox, Killer Mike and others, and release three highly acclaimed solo albums.  Jus also founded his own label, Sub Verse Music, and released several solo albums and two albums with Orko Elohiem as NMS. Both El-P and Bigg Jus are releasing their latest albums just two weeks apart. I’m not sure if it was intentional on Jus’s part to put out a record so close to his former partner, but given that El-P was on a version of “Black Rose,” the first single from the album, it’s probable that Jus was aware when El-P’s record was dropping. Either way, it’s hard to listen to “Machines That Make Civilization Fun” without comparing it to El-P’s “Cancer 4 Cure.”

Both El-P and Bigg Jus have centered their careers on making different variations on the noisy, post-apocalyptic rap that they started with Company Flow. Jus has gone in a more politicized direction than El-P, and he continues that trend on “Machines.” The album starts with an intro of an authority figure telling a crowd to disperse or face arrest, immediately setting the tone of us against them, the 99% against the 1%. Jus sets out to tackle the Occupy movement, the war on terror, corporate dominance of politics, food, and most aspects of American life, and the privatization and profit motives of the prison industry and the military. That is a lot to take on, and unfortunately Jus doesn’t always do so in a coherent fashion.

Compared to “Machines,” “Cancer 4 Cure” seems positively safe and conservative. Jus is incredibly experimental on this album, coloring far outside the narrow confines of hip-hop. He tries out different sounds, different types of beats, and different ways of rapping. Jus spends a lot of the album ranting and chanting in a monotone, not really on beat at all. “Gameboy Predator” follows a recurring template on the album: Jus lays down a crazy beat with crashing drums and menacing synths, and proceeds to spit non sequiturs about video game violence:

It sounds more like the rambling of a paranoid schizophrenic than a rap song. The title track is five-plus minutes of rambling chaos. Jus intones over a random drum solos, chanting about vampires. “Polymathmatics (Restore Balance Out Think A Savage Trick)” has a drum n’ bass beat with some of Jus’s craziest rhymes yet:

“Rasta’s mastaba
On the left of the sacu
Ashra’s mantra
Afu Ba Ka Amen Ra
Ursa Maat-Ra Setep En Ra
Ramesu with the Metu Meri Amen
Salute to Ashra Kwesi to Dr. Ben
The Tjati physician at Sakkara
Waset tekkens be the monuments
Djoser antenna dead center of Washington
Antimorph yourself from Asar’s grip that’s palimpsest
Millennium before any thought of Solomon temp Hiram Abiff
Rocking the carpenter’s apron of the initiate
Holy block Madonna
Russia, Poland and the Vatican
Keep Justoleum on stacks in the basement
Deep in the corner next to the statue they keep crated
Beasting on lower vibration call yourself master mason
Acacia tree flower of life architecture
Dark matter melanin”

Jus’s attempts at more traditional hip-hop are much more successful. “Black Roses” has a beat that sounds like a post-apocalyptic New Orleans brass band, with Jus spitting rhymes that almost make sense:

What “Machines” most reminded me of, oddly enough, was prog-rock band the Mars Volta’s second album “Francis the Mute,” and weirdo auteur David Lynch’s “Inland Empire.” Both were works by highly individual and experimental artists who had made names for themselves by pushing boundaries. Both were working without outside interference for the first time, and both proved that without a producer standing by to reel them in, their work became self-indulgent, unhinged and incoherent. “Machines” has the same feel of art made by somehow who had no one reining him in, and as a result lost the plot to some extent.

Some critics love Jus’s new direction and have compared “Machines” to Shabbazz Palaces’ excellent “Black Up,” which was another experimental take on hip-hop. To me, however, “Machines” is more often than not a noisy mess. Jus has so many musical and lyrical ideas that he isn’t able to edit them down into something comprehensible. The end result is an album that is as unsuccessful as it is daring.