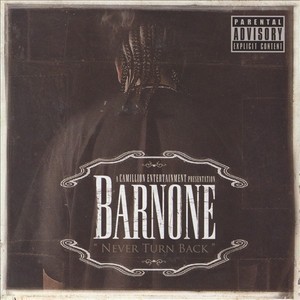 Repping Daly City, a small on the southern tip of the Bay Area in California, BarNone is more or less an unknown outside of his area. His solo debut, “Never Turn Back” aims to change that, however; carefully crafted as a collection of bouncy compositions, the album goes for the “any track could be a single” approach with an almost rebellious dismissal of nuance. For this approach to be successful, the hits have to be consistently entertaining, though. BarNone and his team of producers come up with a couple genuinely amusing records, but among the eleven tracks, BarNone’s batting average is below the Mendoza line.

The soundscape of “Never Turn Back” is defined by piano flips, sirens and the occasional Hyphy clamor. “Mobbed Out” is driven by a low-pitched piano but fails to make an impression in its obvious subject matter. The first official single, “Da Gig,” has a moderate amount of club potential, smoothly transitioning from bouncy to spacey, but occurs so late in the album that it sounds like a miniscule tweak on earlier material. The only change of pace comes with “Ride With Me,” a faux-reflective weed track that finds BarNone palpably outside of his comfort zone.

The aforementioned impressionable cuts: “Da Shit,” and “Still Don’t Know,” the album’s opening track. The former, produced by Antrax Productions, is smartly minimalistic, carried by late â€˜80s claps. The high-energy chorus is accompanied by the classic “aw yeah!” sample (you’ll know it when you hear it) and scratches beneath BarNone’s unnoticeably stupid hook. Better yet, Virginia MC Noah O shows up on the second sixteen and provides a vitality existent nowhere else on the album. “Still Don’t Know” sports a gigantic, Death Row-esque beat, which seems to inspire BarNone to rap considerably above his apparent capability: “Playa haters try to mix me up // Like the Hennessey and coke in my Dixie cup // They wanna smile in my face and they wish me luck // but I know if they could they would get me touched.” It sets up unreasonable expectations for the rest of the album, which never even plays at being so close to vintage E-40. Instead we get lines like, “these are my confessions, but I’m not Usher,” bush league similes that were no better on paper than on vinyl. “Never Turn Back” trades wit for hits and nearly comes up empty-handed.