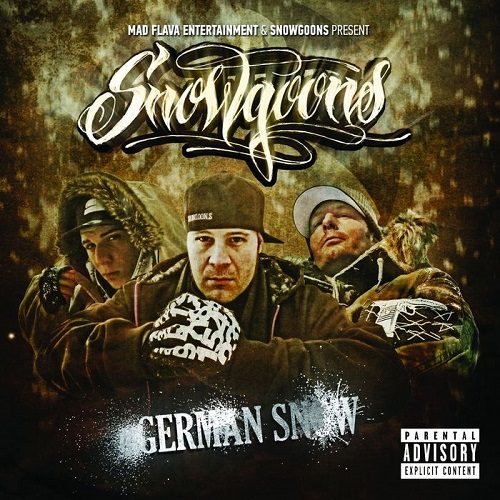 The idea behind “German Snow” is simple. The Snowgoons take English verses from their previous releases “German Lugers” and “Black Snow,” put new beats under them and invite German rappers to create the impression of a US/German collaboration album. While such a project meets the qualifications of a remix album, the collabos themselves remain at least half-virtual, provided the German MC’s even got to pick the song they want to be featured on. To the Goons’ defense, in reality this is how bilingual tracks often come to be, when only one party understands both languages. Although they’re numerous by now, US features on non-English, European rap releases rarely live up to their potential, and if Det, Illegal and Waxwork and their rhyming countrymen take advantage of the special situation, they might actually fare better.

International readers might first and foremost wonder if Germany has even rappers that reach the standing of an Ill Bill, Sean Price, Apathy, O.C., or KRS-One. Opinions differ on this subject, and maybe the question is rather if there are any German rappers that fit the Snowgoons’ specific brand of sinister boom bap that has attracted such an extended bevy of US rhymers in the first place. That’s an affirmative.

Pal One more than holds his own alongside La Coka Nostra’s Slaine and Bloodline’s Lord Lhus on “The Hatred,” riding the hectic beat with a gritty flow that transports hungry lyrics. Curse, one of the country’s premier rap artists, spits his usual well-timed barrage of vital lines on what amounts to the album’s all-star track, “No Guts, No Glory” with O.C. and Rasco. Morlockk Dilemma fits so seamlessly into Ill Bill’s “Enemy” that the prospect of an international version of LCN doesn’t seem so far fetched. CHS delivers competent commentary on the political “Lost” with Block McCloud, Doap Nixon, and Respect Tha God. Switzerland’s jack of all trades Gimma is at his most acerbic on “Sick Life” next to Sick Jacken and Cynic, starting his intense verse with “If my body is a temple, say hello to a temple thief.” Marph adapts to the mythical vibe of Smif N Wessun’s “Casualties of the War” but commits one of German rap’s cardinal sins with a dumb Hitler reference that’s simply out of line: “We Germans have come to make war the way Hitler wasn’t even capable of” (“Wir Deutsche machen hier Krieg wie’s nicht mal Hitler geschafft hat”).

This just to say that this type of do-or-die, Darwinistic style of rap does have its trappings, particularly for Germans. One American rapper that’s always been able to balance the rude with the humorous is Apathy, and he does it again (previously unreleased) on the uptempo romper “A.O.T.P.,” his duet partner, Karlsruhe’s Mars, taking the Ancient Egypt imagery head on and penning what might be the album’s most inspired verse in the process.

Other German highlights come from reliable sources such as Aphroe, who joins Viro The Virus on the pensive and personal “Starlight,” reasoning, “Rap can tell you a lot, but is able to help only a few” (“Rap kann dir viel erzählen, aber den wenigsten helfen”). Perennial hopeful Nico Suave adds his own optimistic world view (original German term: Weltanschauung) to the local flavors of Defari and Maylay Sparks on “Ride On.” Another atypical track is the female duet “The Spell,” which pairs Canada’s Eternia with East Germany’s Pyranja, the latter showcasing a forté of traditional German rap – insightful, relatable, philosophical waxing.

In short, most of the features here make sense and are well chosen. The Snowgoons manage to infiltrate a number of newcomers and representatives of their home state of Baden-Württemberg, and they even allow regional dialects. At 22 tracks, there are bound to be a few head-scratching moments, the occasional German overachiever (Dra-Q on “Gunz,” Ferum on “Still Water Runs Deep”), one or two bad American performances (Cymarshall Law, Brainstorm), the underutilization of the legendary Torch (“Torcher’s Trademark”) – but overall the experiment is a success. With “German Snow,” the Snowgoons prove that they do connect with the scene back home even if their beats lack a distinct German feature (whether such a thing even exists is debatable). Do not be fooled – this is far from an ideal hip-hop collaboration project. But if you enjoyed the sonic mayhem of the Snowgoons so far, “German Snow” offers two incentives – new (and in some cases better) beats and foreign rappers. You may answer in the negative when Apathy runs up on you “like, ‘Sprechen Sie Deutsch?'” (“Black Snow”), but witnessing Simon Says (who won his spot on the track in an online contest) advertise the “Machine Gun-Rap für Boom Bap-Fans” pretty much says it all.